Retail is landing at Heathrow Airport in a big way. 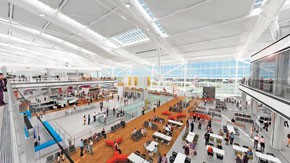 LVMH Sees No Shift Away From Luxury Goods as Markets Reopen

LONDON — Retail is landing at Heathrow Airport in a big way.

On March 30, British Airport Authority’s Terminal 5 is set to make its debut, and the space is rapidly shaping up as a major retail destination. Harrods will launch an 11,000-square-foot airport department store in the building, while Paul Smith will unveil Globe, which will have a music section and a reading room, as well as clothing and furniture.The terminal also will contain Prada’s first store in a European airport, Tiffany & Co.’s first store in a U.S. or European airport and the return to European airport retailing of Coach. Other brands in the terminal will include Mulberry, Thomas Pink and Links of London.

The new terminal will be the exclusive port for British Airways flights, and cost 4.2 billion pounds, or $8.84 billion at current exchange. The space dedicated to retail will span 236,806 square feet.

“In the old days, travel was glamorous. We wanted to go back to that,” said Hazel Curry, head of fashion and fashion accessories at BAA Retail. “I also realized that fashion was really limited at airports.”

Terminal 5 will be separated roughly into two areas: high street and luxury brands. Curry said she wanted to offer a wide spectrum of price points from luxury brands to contemporary labels such as Kurt Geiger and Reiss. “We want it to be dynamic, but still accessible,” she said.

Harrods will offer a specialist denim bar in addition to brands including Missoni, Diane von Furstenberg and Giorgio Armani. The department store will be flanked by two spin-offs: A store selling food and Harrods merchandise, and a luxury outlet that will offer brands including Givenchy, Mont Blanc and Dunhill.

“Small designer brands, which perhaps could not support an independent retail space, do not get represented in airports usually. Now with Harrods they can have a presence,” Curry said.

The stores in the terminal will offer services or products that differ from their usual offering. Tiffany, for example, plans to showcase regular exhibitions of archive designs, and will also offer a private sales salon for exclusive pieces. Meanwhile, Mulberry will run a full bespoke service, and is also planning the launch of a special T5 gunmetal leather accessories range.

The entrance to Paul Smith’s Globe will have antique frontage taken from an old French chateau, while seasonal scenes will be painted on the back wall. There will also be a bookstore where consumers can purchase first editions, coffee table books and cultural tomes. In addition there will be an art wall where antiques, art illustrations and prints of Smith’s own art will be available for sale, and regular exhibitions mounted. Smith is also launching a range of leather goods and stationery that will be exclusive to the store.

“We knew from the start that we would be oversubscribed and that we had to do something really special,” said Curry. “So we challenged the retailers to do something different, to offer something extra as a brand. Some looked at it from store design, others their product, others their services. They had to contribute something.”

Reinforcing the terminal’s aspirational vibe, there is a lifestyle offering including restaurants such as Giraffe, Wagamama, Carluccio’s and a Gordon Ramsay eatery called Plane Food. Elemis will offer three spa facilities, in arrivals and departures. The spas will offer a range of treatments in addition to selling Elemis products.

The building itself is a landmark in the making. Designed by Richard Rogers’ firm Rogers Stirk Harbour and Partners, it offers panoramic views in both directions of the airfield, vast arch spanned roofs for passenger zones and a dramatic light-filled double-height arrivals space.

Curry said one major advantage to planning the project was the wealth of information on hand. Terminal 5 caters exclusively to British Airways, and so from the outset there was a customer profile at hand.

“We immediately were given a picture of who the consumer is going to be,” she said. “They are an aspirational group, a much higher concentration than you would get on the high street. But even with a demographic like that, we needed to appeal to them on many different levels — whether they are traveling for business or leisure — factors like that. We needed a broad reach.”

The data about flight times, passenger volumes and attendance were also attractive to brands.

“Links of London is a British brand, so the affiliation for British Airways was key to us,” said Xenia Carr-Griffiths, the company’s president of Europe, the Middle East and Africa. “The customer profile is also very international in airports, so you immediately are reaching a broader audience. It’s a way of promoting Links of London on an international level.”

“Where else do you have two hours to spare with nothing to do but shop?” added Lisa Montague, chief operating officer at Mulberry. The brand already has successful stores in three other Heathrow terminals, recently added an international store in Singapore airport and has plans for a further store in Copenhagen. Montague said each of the existing stores had exceeded sales expectations.

“We are really happy. It’s to do with the customer flow, there’s a very stable business. People are traveling more. I think the next thing to change will be train stations,” she said.

Montague declined to give specific sales figures for Mulberry’s airport stores, but said they were on par with the brand’s central London flagships. She stressed, however, that the costs of airport retail spaces were higher than regular store properties owing to longer staffing hours and high occupancy costs. “We have found it still works for us, though,” she said.

Montague and Curry both said a factor with airport retailing is that luxury brands were more accessible to broader demographics than on the city street, bringing them in contact with new consumers.

Did increased airport security measures present a challenge? “People’s approach has changed, but we have found that they are still enjoying traveling,” said Curry. “They come through security and know they’ve done the hard part, they can relax.”

As for Curry’s future strategy at Terminal 5, the focus is on flexibility. “We will be constantly talking to customers, to adapt and make sure it works. I want it to exceed expectations. The terminal is always going to be a transient environment because people are always going to be moving on somewhere,” she said. “But I want them to remember their time here.”