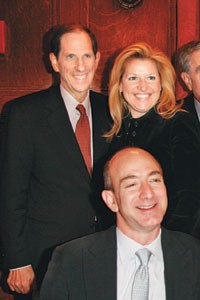 NEW YORK — Financo’s annual dinner at the Harmonie Club last week was the biggest ever, which should come as no surprise given 2005’s bull market in mergers and acquisitions.

Marvin Traub came on crutches after injuring his knee at home, and Gap’s Don Fisher joked that he was seeking advice from other retailers showing better results as of late. “I came tonight to maybe ask someone how I can raise our comp-store sales.”

This year, 230 people packed the dinner, and there were about 100 more for the cocktail hour. In the crowd were Terry Lundgren and Sue Kronick of Federated, Burt Tansky of Neiman Marcus, Robert and William Taubman, Jay Schottenstein and Roger Markfield of American Eagle, Joseph Gromek of Warnaco, Denise Seegal of Nautica, Lew Frankfort of Coach, Claudio Del Vecchio of Brooks Brothers and Stephen Sadove and Andrew Jennings of Saks Fifth Avenue. Dinner remarks were tame compared with past years, though there was a fair share of sarcasm. “The rich continue to do what they are supposed to do and we love it,” Tansky said.

Combs discussed his love of fashion, saying he was influenced by a grandmother who worked as a seamstress — with Combs “acting as her assistant” — and a colorful mother who is a skilled “shopaholic.” Combs also cited his gay Uncle George, who provided fashion sensibility to Combs’ evolving, if not flamboyant, style.

Bezos said his 11-year-old firm has spent much time focusing on the customer experience, and that intermediate sacrifices are sometimes worth making for the long-term benefit of the brand. He gave as an example the company’s decision to allow customers to write book reviews. Publishers had said negative reviews would hinder the sales, but Bezos believed the strategy would create more sales by helping customers make purchasing decisions.

For Gould, the focus has been on reinventing the shopping experience for customers. “We don’t have to be something to everyone, [but we] try to be special for a few.” Gould said one goal is to be consistent with a point of view. “We admire Neiman Marcus, but we don’t aspire to be Neiman Marcus. We aspire to be what Bloomingdale’s should be.”