The period's cold winds and uncertainties might have passed, but they left many U.S. merchants with weaker bottom lines. 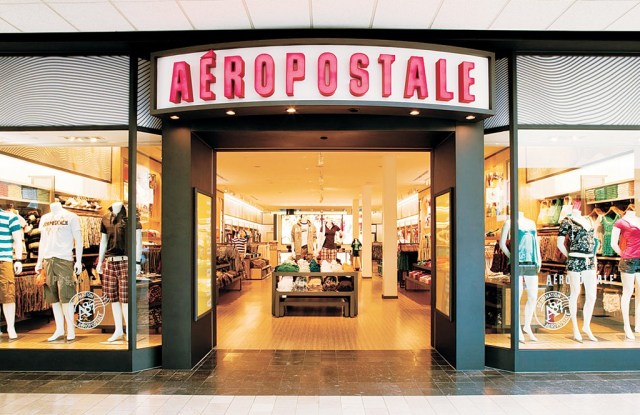 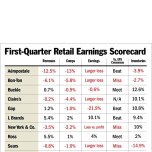 It’s a fingers-crossed moment for retail.

The first quarter’s cold winds and uncertainties surrounding health-care costs might have passed, but they left many U.S. merchants with weaker bottom lines, heavier inventories and plenty of work to do to make their numbers for the year. Results Thursday from Sears Holdings Corp., Gap Inc., The Bon-Ton Stores Inc., Aéropostale Inc. and others only showed the steep hill retailers face in the months ahead.

And that’s why retailers are generally setting a cautious tone, while economists see the consumer fundamentals as solid and getting better.

“The weather was so severe customers couldn’t get out of the house to go to the stores,” said Brendan Hoffman, Bon-Ton’s president and chief executive officer. “But it’s hard to distinguish what’s weather related and what’s not. This quarter will be much more of an indicator” of how eager consumers are to shop.

“We are looking forward to current weather patterns, but obviously we are very disappointed and frustrated with business results,” he said. “What adds to it is not being able to get a true read to the business.”

Hoffman suggested rising fuel costs were part of the general consumer problem. “The biggest learning I’ve had since I’ve been at Bon-Ton is how much fuel prices specifically really impact our customer. That’s money out of her pocket. We are starting to anniversary when gas prices peaked last year.”

It’s still early for retailers to tweak their numbers for the year. For now, most are sticking by their annual guidance, betting (and hoping) that the relative strength shoppers showed at the end of the quarter will continue.

But it is by no means a straight-forward path for retailers or shoppers, who are still being very choosy where they spend their money. The Commerce Department pegged the total retail and food service sales gain during the February-to-April quarter at 3.3 percent. That was driven by the 8.9 percent rise at automobile and motor vehicle dealers, a 6.6 percent increase for non-store retailers and a 5.3 percent gain for health and personal-care shops. Lagging somewhat against those drivers was apparel and accessories stores, where sales rose 1 percent, and department stores, where sales dropped 2.7 percent.

Although it’s been a painfully slow climb out of recession, most economists expect growth to continue, outside of the first quarter, where revisions might well show that GDP took a step back.

And consumers do have money.

James Smith, chief economist for Parsec Financial Management, pointed out that household net worth rose to $80.7 trillion last year — its highest level ever and a nearly $10 trillion gain versus 2012.

“We have the wherewithal to spend now, we have incomes at an all-time record level and consumer confidence is coming back pretty well,” Smith said. “We had a miserable winter. It’s all behind us, we’re in good shape now and consumers are spending.”

Even so, competition is increasing for retailers, and Smith said they would do well to remember the words of Marshall Field: “Give the lady what she wants.”

“Retailers with good merchandise selection and good price points that cater to consumers are going to prosper mightily,” he said. “People who can’t figure out what on Earth they’re doing…are going to keep having difficulties.”

Frank Badillo, chief economist at Kantar Retail, agreed that the outlook is solid and said shoppers pulled back in the first quarter because of the inclement weather and because they were unsure about the costs of the new national health-care law.

“Retailers should be more than hopeful,” Badillo said. “We’re already seeing in the numbers a bound back from this winter chill.”

“It’s bounding back sharply among the haves and the have-nots — the lower- and upper-income households,” he said. “We expect to see some pretty good numbers through the rest of the year as long as we can sustain some momentum in the job market.”

So far, the numbers from most retailers show plenty of room for improvement.

Sears posted a substantially wider first-quarter loss and diluted earnings per share at $3.79 — nearly double Wall Street’s estimate of $1.87 — but investors took it in stride and pushed the company’s stock up 4.2 percent to $38.10.

Chairman and ceo Edward S. Lampert, in a prerecorded call, reiterated the company’s shift to a membership-based model that is more focused on online sales, noting “Our performance in the first quarter highlights the challenges we are facing as well as the progress we are making in this transformation.”

It’s an explanation that investors and analysts have heard before — although that’s not the same as saying Lampert is wrong in the final analysis. The company gained $500 million from the spin-off of Lands’ End, but has also been investing in the Shop Your Way program and technology, coming up with a first-quarter net loss of $402 million, compared with a loss of $279 million a year earlier.

The ceo also spoke about how the firm is in the process of closing 80 stores and “may close additional stores over the course of the year.”

Lampert said improving productivity has meant focusing on inventory levels, and highlighted that the company’s domestic net inventory is down $511 million year-over-year, excluding the impact of Land’s End. To be sure, the company needs less inventory as it continues to close stores.

Chief financial officer Rob Schriesheim spoke about the company’s redeployment of its “rich portfolio of assets,” including the possible divestment of its 51 percent stake in Sears Canada, which was pegged with a market valuation of $730 million, and the still-potential separation of its Sears Auto Centers.

Experts who have followed Sears since its heyday don’t see an end to the retailer’s decline.

Walter Loeb of Loeb Associates referred to Sears as a “dying dinosaur.” He wasn’t kind about its future: “Sears is absolutely going out of business. They’re not even trying anymore. Sears is trying to satisfy the investor by selling off pieces. That’s just making a short-term profit.”

Jeff Edelman, director of retail and consumer advisory services at RSM McGladrey Inc., said, “Sears is on a slippery slope down.” He said the company hasn’t yet figured out how to compete in the current marketplace and that what they’re doing is “not working.” As for the Shop Your Way membership, Edelman said, “There are better places to shop.”

In response, a Sears spokesman said, “Sears is embarking on a transformation of its business, from simply being focused on selling products in a traditional store network, to serving our members — wherever, whenever and however they want to shop. The progress we see in the engagement of our members in the Shop Your Way program and the traction we see in our Integrated Retail strategy give us confidence that we’re on the right track. We’re investing heavily in our future and we’d ask those watching to stay tuned.”

Gap took some missteps in the first quarter but it’s “all in our control” going forward, assured chairman and ceo Glenn Murphy, during the retailer’s conference call Thursday reviewing first-quarter results and plans for the future.

Gap’s first-quarter net profit dropped 22 percent to $260 million from $333 million in the year-ago period. Net sales were up 1 percent to $3.77 billion from $3.73 billion, while comparable-store sales slipped 1 percent.

“We’re pretty disappointed in our earnings results for the first quarter. In spite of the challenging operating conditions, I expected we would do better,” Murphy said candidly.

He blamed the results on too much spring-forward product and customer communications that could have been better, adding that the company could have done a better job managing margins.

“All three areas are completely in our control and we are making the necessary changes in Q2. Our goal is gaining share in the second, third and fourth quarters,” Murphy said.

“Old Navy is the brand furthest along,” Murphy said. “We made some really good decisions on assortment, rooted in fashion essentials and a good creative marketing platform.”

Banana Republic women’s “has turned the corner,” the ceo said. “Customers will truly notice the difference in our August delivery.”

The Gap brand, he added, “is headed in the right direction but still has work to do. It’s moving to a full global assortment in August.” Also ahead: Gap’s first global campaign.

“We are confident in our strategies to drive long-term value, as evidenced by the reaffirmation of our full-year guidance” of EPS in the range of $2.90 to $2.95.

By brand, comparable sales at Gap were negative 5 percent; Banana Republic was negative 1 percent, and Old Navy was positive 1 percent. Online net sales grew 13 percent to $575 million in the quarter.

Across the divisions, a total of 250 stores, owned and franchised, will be added this year. Other initiatives include the ongoing reserve-in-store rollout, and next month, Gap will pilot online ordering in the stores. “It’s digital. It’s quick. Our employees will carry it with them on the floor to close the sale,” Murphy said.

Bon-Ton had a challenging quarter, widening the net loss for the three months ended May 3 to $31.5 million from $26.6 million in the year-ago period. Total sales decreased 6.1 percent to $607.5 million from $646.9 million a year ago, and fell 5.8 percent on a comparable-store basis.

Cosmetics and accessories were weak, according to ceo Hoffman, who said the stronger categories included active and ath-leisure. Bon-Ton operates 272 stores in the Northeast, Midwest and upper Great Plains, where some of the worst winter weather was seen last quarter. The company came out of the quarter with gross margin rates rising to 35.3 percent from 34.8 percent. Clearance centers helped move merchandise. Bon-Ton started opening clearance centers about a year ago and currently has four.

“We saw an improvement in sales performance mid-April as the weather became more seasonal and traffic trends improved dramatically,” Hoffman said. “Despite our shortfall in sales, we were able to achieve a higher gross margin rate, control expenses and effectively manage our inventory such that we ended the quarter with retail inventory levels 1.7 percent below that of the prior year on a comparable-store basis.”

In a conference call, Hoffman said Kohl’s, Wal-Mart, Target, Sears and Kmart are increasing the frequency of their advertising. “Their national footprint has allowed them to go deeper. It’s the most noticeable thing of how people have been reacting to tough business. They have all gotten sharper on their promotions, as we have. I don’t expect to see any short-term crazy promotion.” It’s really about “increasing your marketing spend and you have to be deeper on most of your promotions.”

For the three months ended May 3, the company saw a wider net loss of $76.8 million, or 98 cents a diluted share, from $12.2 million, or 16 cents, a year ago. Wall Street’s consensus was a loss of 72 cents a share. The company had a restructuring charge of $34.5 million, which widened its operating loss to $83.4 million. Net sales fell 12.5 percent to $395.9 million from $452.3 million. Comparable-store sales declined 13 percent, on top of a comps decline of 14 percent in the same year-ago quarter. Analysts were expecting sales of $410 million for the quarter.

Thomas P. Johnson, ceo, said the macroeconomic environment in the quarter was impacted by “aggressive promotions, lower mall traffic and unseasonable weather.” One bright spot Johnson noted was that the chain ended the quarter with “inventories well-controlled.”

For the second quarter, Aéropostale expects operating losses of $49 million to $54 million, or a diluted EPS range of 55 cents to 61 cents.

The retailer said it expects second-quarter comp growth of 1 to 2 percent with EPS for the quarter of between $1.05 and $1.09, with the high end of the range 1 cent above current consensus estimates on Wall Street.