For retailers across the country this holiday season, there’s disappointment. 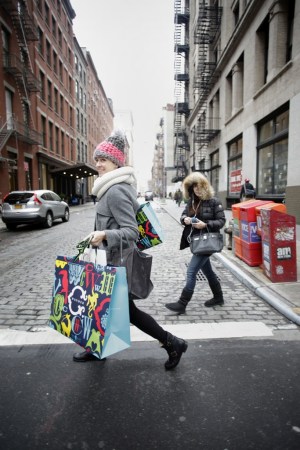 For retailers across the country this holiday season, there’s disappointment.

Consumer confidence levels and the stock market have been holding up, yet people just aren’t inclined to shop that much, according to store executives who sell fashion across a spectrum of prices.

While still hoping to meet their already conservative goals for the season, the mood to shop, they surmised, has been brought down by Hurricane Sandy, the tragedy in Newtown, Conn., and the inability of politicians in Washington to work together to resolve economic issues. The warmer-than-usual weather, too, has been a factor, hampering sales of coats and gloves. Some executives also cited late deliveries of merchandise.

“We’re getting our share of traffic but the season has not been spectacular,” said Claudio Del Vecchio, chairman and chief executive officer of Brooks Brothers.

Aside from a clearance sale staged on brooksbrothers.com last week, which fared better than the same event a year ago, “basically we are still at full price. We’re probably the only one,” Del Vecchio said. “People are shopping for gifts. We are getting the gift business we normally get. People shopping for themselves may be waiting for the sales.” At Brooks Bros., they have a lot to look forward to. The brand’s biggest day of the year, Del Vecchio pointed out, is the day after Christmas, when the store holds its semiannual sale.

“Traffic is not what it ought it to be. There’s been a slowdown in the last 10 days,” observed one senior East Coast retail executive. “There are brands that are performing, but the ones that are soft are really soft.”

Another retailer, who also requested anonymity, when asked how the season was going, replied: “I’m looking forward to Jan. 1.”

The National Retail Federation, commenting on an upcoming House vote on legislation intended to avoid middle-class tax increases in the fiscal cliff, said progress on the issue is critical. “Although this may not be the perfect solution to the fiscal crisis, what’s important is that Congress provide certainty going into the new year on tax issues that will impact every American,” said NRF president and ceo Matthew Shay. “Worries over the economy have already affected consumers during the holiday season. Worries coupled with actual tax hikes and spending cuts add up to a disaster our economy cannot afford.”

The NRF is forecasting retail sales in 2013 to increase between 2 and 2.5 percent if the fiscal cliff is avoided, based on an analysis conducted by NRF chief economist Jack Kleinhenz and Macroeconomic Advisors. If not, sales would be flat for the year, with negative growth during the first half of the year, according to the study.

A White House report released last month said consumer spending could take a hit of nearly $200 billion next year if middle-class tax cuts affected by the fiscal cliff are allowed to expire.

“We need to avoid going over the fiscal cliff, but Congress and the White House also need to develop long-term plans that will restore consumer confidence so that the business world can go back to investing capital and creating jobs,” Shay said.

For retailers, this weekend could be pivotal. They’re hoping shoppers are out in force this weekend. This year’s extended calendar, with two extra days of shopping between Thanksgiving and Christmas (34 versus 32 in 2011), caused consumers to hold off on purchasing, knowing they had a couple of extra days and a full weekend before Christmas.

In addition, consumers know that right after Christmas is when they can get the ultimate bargains, as retailers rev up clearances. With the deadline for online orders arriving in time for Christmas having just passed, there should be a swing to more shopping in stores in the days ahead.

On Thursday, major Manhattan venues, such as 34th Street and Fifth Avenue, appeared busy yet not as mobbed as in past years. Abercrombie & Fitch on Fifth Avenue, which some people see as a barometer for shopping traffic in the city, didn’t appear to be getting the usual lines outside the main entrance.

“Retailers are not moaning and groaning yet” over the soft business trend, said Arnold Aronson, managing director of retail strategies at Kurt Salmon. “They’re counting on a lot of shoppers coming out this weekend. Friday, Saturday and Sunday could be close to or at what business was on Thanksgiving weekend,” which was good for many retailers. Aronson predicted results for December will range from flat to midsingle digits ahead.

The NPD Group reported an increase in the percentage of U.S. consumers who shopped during the week ended Dec. 15, to 57 percent from 56 percent in the preceding week, with a corresponding decline in conversion rate — to 64.5 percent from 65.3 percent. Average spend was essentially flat in brick-and-mortar stores but declined 4 percent online, the Port Washington, N.Y.-based research company said.

The online share of buying visits rose to 21.4 percent from 21 percent during the prior week. “As we move closer to the end of the holiday shopping season and as consumers enter the mode of last-minute gift shopping, online share is likely to decline,” said Marshal Cohen, chief industry analyst at NPD.

In its most recent update on e-commerce activity, digital tracking service ComScore Inc. reported that U.S. e-commerce sales during the week ended Dec. 16 produced a milestone — the first $7 billion week of online spending. Revenues were up 11.7 percent to $7.02 billion, from $6.29 billion in the corresponding year-ago week. That represented an improvement over the 9.1 point advance for the eight days ended Dec. 10 and the 10.7 percent increase for the seven days ended Dec. 14.

The most recent results brought season-to-date online spending to $35 billion, 12.7 percent ahead of the comparable days in 2011.

“This current week, which kicked off with Free Shipping Day on Monday the 17th, will be critical in making up some ground on a season-to-date growth rate that remains below initial expectations at 13 percent following a prolonged post-Cyber Monday lull,” said Gian Fulgoni, chairman of the Reston, Va.-based ComScore. “With many retailers extending their free-shipping offers into Tuesday and Wednesday of this week, we just may see the sort of late-season jolt needed to push growth rates back into the mid-teens.”

But e-commerce tends to slow substantially in the week leading up to Christmas as consumers are reluctant to press their luck about obtaining timely deliveries of gift merchandise. Last year, e-commerce sales in the week ended Dec. 18 were $6.29 billion while those for the following week, ending on Christmas Day, were $2.83 billion.

While still outperforming general retail sales by a wide margin, Internet sales have come down from the growth rates in the teens, or higher, seen previously. E-commerce sales rose 14.4 percent during November, to $21.35 billion. Last year’s total for November and December was $37.17 billion, 14.9 percent above the prior year, according to ComScore.