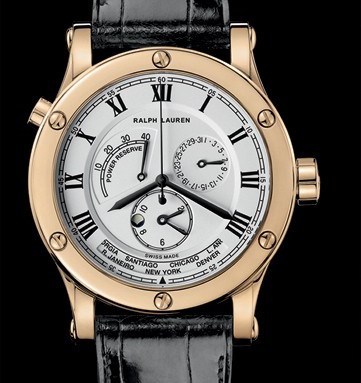 The launch is a major step for Richemont, the world’s second-largest luxury goods group after LVMH Moët Hennessy Louis Vuitton. And it comes as the sector faces major challenges — Richemont on Monday said demand for luxury goods has fallen dramatically, and the company is facing the “toughest market conditions” since its formation 20 years ago.

The firm offered a dismal outlook as it revealed sales for the October-December period fell 7.8 percent to 1.55 billion euros, or $2.06 billion, from 1.67 billion, or $2.22 billion, and that it was making job cuts at its flagship brand Cartier.

Richemont clearly hopes the new Ralph Lauren line will buck the market. With countless red roses decorating the opera house here and a jazz ensemble giving the evening an American flair, Lauren, who has collected watches for years, said he dreamed for years of putting his imprimatur on a high-end timepiece.

“Basically these are watches that I would want to wear myself,” explained the designer, dressed in black tie and accompanied by his wife, Ricky, and their sons, David and Andrew. “It took me a long time to find the right partner and then to come up with a design that was all my own,” said Lauren. “I wanted a distinct specialness in my watches.”

The result is a collection built around three distinct models that draw on Lauren’s taste for classic, understated luxury. The watches start at $9,000. The most expensive model, a limited edition platinum piece, costs $70,000. Lauren’s taste for classic American style tempered with a hint of continental flair is evident in the designs. Models include a vintage-looking thin, round evening watch with intricate guiochet details done by a machine created in 1892; a watch formed like a stirrup that draws on Lauren’s equestrian heritage, and a sporty round model with screws on the bezel.

Lauren said working with Richemont, which also owns industry stalwarts including Piaget, IWC and Jaeger-LeCoultre, brought him immediate “legitimacy” in the watch trade. “Everything is of the highest level,” he said. “There is no questioning the level of the movements and quality.”

At the dinner, Rupert said it marked the beginning of a “serious” watch business that he expects to grow.

“People are [still] buying longevity,” said Lauren. “This is a very classic watch collection with very limited production. It is not frivolous.”

Guy Châtillon, chief executive officer of Lauren’s watch business, said distribution would be “highly selective,” starting with Lauren’s own flagships around the world. The first watches are expected to be in store in April.

They are the fruit of a collaboration with Rupert that was sealed four years ago, when the luxury watch business was flying high. With sales of high-end timepieces down sharply in the face of current economic turmoil, the timing of the launch may not seem propitious. Some analysts predict sales of Swiss watches will decline as much as 20 percent this year.

Richemont’s statement Monday could only have added to analysts’ concerns. The group said sales in all major product categories fell, and the only geographic regions showing growth for the October-December period — the most important of the year — were Asia-Pacific, where revenue rose 4 percent, and Japan, which rose 1 percent.

Cartier is “scaling back” its staff, and will put nearly all of its employees of the Villars-sur-Glâne factory in western Switzerland on partial employment contracts due to a slowdown in demand, Bernard Fornas, chief executive of Cartier International, said Monday.

Starting in February, 180 of the 200 employees at the factory, which produces watch boxes, will work three days a week, and receive 80 percent of their salary.

Richemont did, however, attempt to console its shareholders by highlighting the strength of its balance sheet — it has 642 million euros, or $834.6 million at current exchange, in cash — and stressed management was “committed to not only see the difficult times through, but to emerge stronger.”

In the run-up to Christmas, the American market was the worst performer with sales down 24 percent, followed by Europe, where sales fell 8 percent. The 4 percent growth in Asia-Pacific was fueled by Mainland China, where Richemont said sales rose 24 percent at constant exchange rates. Sales in Japan rose 1 percent, but the company said that was due solely to positive exchange rate movements.

The only category that showed growth was other businesses, which includes watch component manufacturers. Sales in that category rose 3 percent.