Rising metals prices have resulted in some jewelry firms becoming creative in their designs. 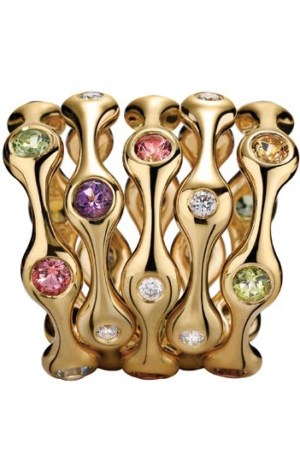 “As precious as gold” is proving truer than ever.

The metal soared briefly above $1,500 an ounce Tuesday before slipping back to $1,495.80 as investors rushed into gold as a hedge against the weak dollar, continuing concerns over U.S. debt, turmoil in the Middle East, the European sovereign credit concerns, and the ongoing nuclear crisis in Japan. And its skyrocketing price is further evidence of the inflation plaguing the luxury and fashion industries, which already are dealing with spiraling costs in everything from cotton to cashmere.

The jewelry sector is the main one being squeezed by the rising cost of gold — as well as higher prices for silver, which had been seen as an alternative metal.

And the rise in prices could get worse.

On Monday, Standard & Poor’s reduced the outlook of U.S. sovereign debt, which currently holds a “AAA” rating, to “negative” from “stable.” Overseas, Greece is in the news again over concerns about its ability to repay its debt. In general, there’s been continued worries regarding the European Union bailouts failing to lift the sovereign debt markets.

John Lonski, team managing director of the economics group at Moody’s Analytics, said, “All of the above has created a heightened fear factor, and the demand for the supposed insurance conferred by gold grew.” He noted that gold has been rising steadily since the terrorist attacks in the U.S. on Sept. 11, 2001.

“That came down sharply from its [prior] close and is at one of its lowest readings. You would expect it to go up, not down. Moreover, if there’s heightened worry over price inflation, the 10-Year U.S. Treasury yield would rise, but it fell. That tells you how thinly traded gold is. It doesn’t take much of a shift in demand to move the price of gold significantly in one direction or another. I think it’s a mistake to infer either a faster price inflation or an impending collapse by equity prices from the latest jump in gold,” the economist said, noting that wages are a better predictor of core inflation.

That said, chances are good that gold prices could climb higher. Citizens in emerging market economies where the economic outlook sees doubt in the ability of that nation to grow rapidly without inflationary pressures could begin buying gold as an insurance policy and cause prices to rise. Global inflation concerns are already an issue in Europe, China and India. Another euro crisis could cause the dollar to strengthen as a result of investors’ flight to safety, even as gold prices move higher as well.

Lonski said gold also would “move higher as the lack of confidence in the ability of government leaders and business leaders to avert economic calamity grows.”

Gold historically is a form of wealth preservation as both an inflation hedge and a currency hedge, said Juan Carlos Artigas, investment research manager at the World Gold Council. Consequently it is a form of “protection in times of duress.” Still, overall “global allocations to gold remain small as a percentage of assets,” he stressed.

China and India accounted for 40 percent of total gold demand in 2010, including both gold jewelry sales and purchases of the metal as an investment, Artigas said, speaking at a recent conference on “Gold: Substance, Symbol and Significance” earlier this month at The Graduate Center, The City University of New York.

According to Victor van der Kwast, global chief executive officer, international diamond and jewelry group at ABN AMRO Bank, gold jewelry demand from China and India is enormous because of the role it plays in dowries in those countries. Gold demand from Turkey and Russia is also on the rise.

“The central banks, the International Monetary Fund and advanced nations are protecting themselves against uncertainty, and are holding about 40 percent of the [gold] reserves,” van der Kwast said.

However, gold jewelry demand from Japan, Thailand, Korea and Vietnam has dropped as consumers in those countries are becoming resistant to price increases. “The Middle East is cutting back due to volatility in gold prices. The U.S. is in a downtrend in demand for gold jewelry, and the European customer is also discouraged by the high [gold] prices,” he said.

In contrast, the “official sector known as government has been the net buyer of gold in 2010,” he explained.

He believes that “until concerns over the U.S. fiscal deficit dissipate, gold prices will remain strong.”

Doug Groh, senior research analyst at Tocqueville Asset Management, said, “Gold is in a long-term bull market. We are halfway through the market in terms of performance. Its demand is limited by supply, and the cycles last between 15 and 20 years.”

Groh told attendees that a “credit-based monetary system encourages currency debasement” and that the “concern regarding the U.S. is that it is overextended on its future obligations.…All currencies have lost purchasing power over time.”

The analyst noted that silver is also in a “bull market. Countries have debt obligations that are overwhelming….Historically, the precious metals market provide protection against inflationary governmental policies.”

Silver, “the poor man’s gold,” is starting to catch up price-wise, he noted.

If pricing in the metals market continues to rise, that could crimp the availability of vintage jewelry, according to the fashion and finance panel.

Patti J. Geolat, founder and ceo of appraisal firm Geolat Cos., who moderated the panel, noted that “some [vintage] pieces don’t make it to the next generation.” She explained that when people need to sell their jewelry, the rising metals prices become competitive to the value of the vintage pieces, and the risk is that they get sold instead for their melt-down value.

In an interview with WWD, Lamb cited Gurhan, who pioneered the revival of pure 24-karat gold jewelry, for innovation in expanding its repertoire. He noted the brand’s set of three thin bangles featuring pure 24-karat yellow gold, white silver and a dark silver that looks oxidized. “That set creates more wardrobe possibilities for consumers,” Lamb said.

Another firm Lamb cited was David Yurman, which has expanded into combinations of metals and gems to create collections that include “affordable pieces.”

As gold prices keep rising, Lamb expects to “see more precious gems mixed with gold because the pieces have a higher perceived value.” Another trend is bigger and bolder pieces. In the timepiece category, that means a heavier Rolex bracelet, with a bigger day-date design on the face.

“Women will stretch to buy big statement pieces, such as a single cuff,” he predicted.