Rising Gucci Group Sales Stand Out for PPR in Qtr. 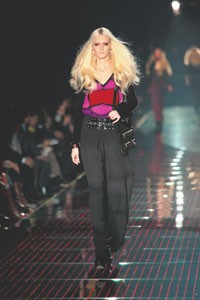 Yves Saint Laurent gained traction with such hot handbags as the Downtown, contributing to a 26.3 percent gain in the fourth quarter, while the core Gucci brand’s momentum increased in the three months ended Dec. 31; sales were up 12.5 percent and there were strong double-digit gains across all product categories except timepieces.

Still, the French conglomerate continues to be plagued with anemic sales at its retail division, which slipped 0.5 percent at constant exchange in the quarter to 4.34 billion euros, or $5.59 billion. PPR blamed adverse weather and sluggish spending in Italy and France for the poor performance.

Overall, group sales in the quarter gained 3.2 percent, to 5.37 billion euros, or $6.93 billion, based on average exchange. Currency conversions were made at average exchange rates during the period.

“Our performance this quarter once again confirms the favorable dynamics of PPR based on prestigious luxury brands and solid retail banners,” chief financial officer Jean-François Palus told analysts during a conference call Thursday.

“In luxury, the market is continuing to grow, though at a slightly slower pace.”

PPR highlighted strong growth in luxury across most geographic regions, including Japan, where fourth-quarter sales gained 10.9 percent at constant exchange rates. However, owing to a weak yen, reported sales lost 0.6 percent in Japan. Gucci Group sales in North America rose 17.8 percent, to 216.3 million euros, or $275.4 million, in the quarter.

“All regions showed very solid growth, especially in North America, where December was outstanding, and even Japan, where the trading landscape is less favorable for luxury,” said Palus.

In the quarter, sales of Gucci shoes rose 22.6 percent; leather goods, 16.4 percent, and ready-to-wear, 16.5 percent. With watches, “our objective is to upgrade our collections and our positioning,” Palus said. Gucci brand sales totaled 606.7 million euros, or $782.4 million, in the quarter.

Palus trumpeted growing momentum at YSL; leather goods sales surged 74.2 percent in the fourth quarter at constant exchange for total brand sales of 56 million euros, or $72.2 million at average exchange. “The brand has regained a genuine competitive edge in the leather goods industries,” he said. “[It] is indeed on the upswing.”

Other brands, including Balen­ciaga, Alexander McQueen and Stella McCartney, posted 32.9 percent growth in the quarter, to 100.5 million euros, or $129.6 million. Palus highlighted the “best year ever” for Sergio Rossi and said all brands were “well in advance” to reach their break-even targets.

But “the U.S. remains a challenging market for the company,” he added.

PPR’s retail activities — which include Fnac book and record stores, the Conforama furniture chain and Redcats catalogues — faced a “challenging” climate in Europe, marked by a “dismal” October, unseasonable weather and a “reasonable Christmas.”

On the plus side, PPR said it continued to become less dependent on France, for sales and its e-commerce businesses were robust, gaining 23 percent in 2006. At Redcats, 36.4 percent of home-shopping revenues were online, according to Palus.