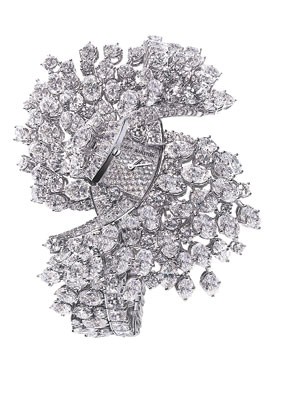 Harry Winston is out to change the way diamonds are bought and sold.

Aber Diamond Corp., the mining company that owns Harry Winston Inc., will rename itself Harry Winston Diamond Corp. starting today with the new symbol on the New York Stock Exchange of HWD. The company previously traded on Nasdaq under the ABER symbol.

The renaming of Aber has more significance than simply a new stock exchange symbol, however. The firm has a 40 percent interest in the Diavik Diamond Mine in Lac de Gras in Canada’s Northwest Territories. The mine produces 10 percent of the world’s diamonds — 9 million to 10 million carats a year — which it sells to Winston and other suppliers. With the new company name, every diamond that comes out of Diavik will be labeled a “Harry Winston” diamond, conjuring images of the jewelry retailer’s past, such as the stellar Taylor-Burton diamond, the Hope diamond and the house that outfitted Gwyneth Paltrow in diamonds for her Oscar win in 1999.

“It was Harry Winston’s dream to own a mine,” said Thomas J. O’Neill, president of HWD and chief executive officer of Harry Winston Inc.

The move to change the company name comes slightly more than a year after Harry Winston chairman Ronald Winston, 66, sold off his share of the company for $157 million. Aber acquired a 51 percent controlling stake in Winston in April 2004 for $85 million from Ronald, son of the late Harry Winston, and Fenway Partners, a Manhattan-based private equity firm. In the Nineties, Ronald and his brother Bruce feuded in courts over control of the company. But now that the family feud is out of the way, the company is continuing with an aggressive expansion strategy.

At different periods during his career, O’Neill presided over LVMH’s jewelry division, Louis Vuitton Americas and Marc Jacobs and was vice president of Tiffany & Co. But after one look at how he handles a loop and the enthusiasm with which he greets the bench workers by name in the workshop above the brand’s Fifth Avenue flagship, it’s clear diamonds are where his affection lies.

“[Diamonds] change the way people view themselves. You don’t know the feeling until you put it on,” he said, adding that each year there are more global billionaires — and thus more buyers of important diamonds.

Harry Winston, which will have 18 stores by year’s end, is planning to more than double its store count. O’Neill said the firm’s sweet spot would be between 40 and 45 retail outlets worldwide.

“We didn’t set that number willy-nilly,” he said. “There’s a huge cost in carrying what we carry. We set it scientifically.”

Graff, a privately held firm that also has stakes in diamond mines, has its sights on being a $1 billion company as well. As more brands such as Chopard, De Beers, Tiffany, Leviev and Graff expand their assortments and store counts, diamonds are becoming more expensive. The Jewelers of America said jewelry sales last year were estimated at $55 billion, up from $51.5 billion in 2005. Diamond jewelry distribution of sales was 35 percent, while loose diamonds were 15 percent, according to the Jewelers of America’s 2007 Cost of Doing Business Survey.

The U.S. is the largest diamond-consuming market, followed closely by Japan, O’Neill said.

Most of the diamonds that come from the Diavik mine are long and linear, so the new Harry Winston Diamond Corp. won’t be completely vertically integrated. It must outsource for round, pear and marquise-shape diamonds in addition to other gemstones such as sapphires, emeralds and rubies.

“The demand for diamonds has never been greater,” said James K. Gowans, president and ceo of De Beers Canada Inc., in a panel hosted by the Luxury Marketing Council this month.

Aber has already invested $2 billion in Canadian mining opportunities. Canada is a relatively new source for diamonds, which have historically been sourced in Africa and Russia. Tiffany has also invested heavily in Canadian diamond mines.

Winston plans to open outposts in Boston, Washington, Atlanta, Houston, Seattle, Palm Beach, Fla., and Orange County in California. On Saturday, it opened a store on Chicago’s Oak Street. Internationally, the firm is looking at the Middle East, Eastern Europe, including Kiev, Moscow and Budapest, and more stores in Asia, including Taipei. On Tuesday, the firm will open a store in Nagoya, Japan.

“They’re following the hottest trend — and probably the most safe and sustainable trend — in retail,” said Arnold Aronson, managing director of retail strategies at Kurt Salmon Assoc. “Fine jewelry not only represents lasting and visible value, there’s some financial safe haven when people have selected well.”

The opening price point in the stores is about $3,700 for a small pair of diamond earrings and prices can go up into the multimillions of dollars. The average sale is $40,000 to $50,000.

“I don’t mean to be snooty, but we’re not available to everyone,” said O’Neill, adding that customers often come into the store interested in a lower-priced item that was advertised, but they typically trade up. “We do have entry-level prices, so it’s not so terrifying.”

O’Neill said he isn’t threatened by the competition.

“Any smart shopper shops around. That welcomes us to explain our work,” he said coolly, noting that nearly all of Winston jewelry is made in a workshop above the Fifth Avenue store. Over a dozen men who have at least served 25 years on the bench spend hundreds of hours setting complicated necklaces, bracelets and brooches among other things.

“There’s a design explanation for everything,” O’Neill said. “There’s a story about every piece.”

Renaming Aber as HWD will only add to that story, observers believe. “So much of the luxury experience is based on perception,” said Suzanne Hader, principal at 400twin Luxury Brand Consulting. “Harry Winston already has so much cachet. Previously, you would buy an engagement ring and they [salespeople at any jeweler] tell you about the four Cs…[Winston] is taking it to a new level. There’s a little more romance there. It’s the brand flavor, which I’m sure there will be a premium for.”

Hader was referring to the basics of diamonds: cut, color, clarity and carat.

The question remains, however, whether going global with multiple locations could dull the special and exclusive nature of high jewelry companies. Graff, whose average sale is $400,000 and which recently opened its first Asian store in Tokyo, is opening others in Hong Kong, Geneva and Manhattan over the next few years. Tiffany recently unveiled plans for 70 new regional U.S. stores offering women’s jewelry from $100 to $15,000 under the working title Tiffany & Co. Collections. This month, Chopard opened a new, larger flagship on Madison Avenue and Leviev opened its first U.S. store on the same row.

“If you had to wait for everybody to find the time to travel to Paris or London or New York, you’re losing a lot [of business],” said Aronson. “People like to have instant gratification, especially the rich. We’re in a global world and that means there’s access for consumers to have an experience and not buy it over the Internet.”

From Hader’s view, however, “That kind of expansion will water down a brand. It may be profitable and it may be the right thing to do for a company…but it might water down the brand. Certainly for a brand like Harry Winston when you’re talking about a $10 million necklace…if people don’t feel glamorous and don’t feel that there is a special experience, part of the value of those diamonds goes down.”

O’Neill intends to keep that special nature of Winston alive. Despite the growth of the retail network, company policies remain the same: most of the jewelry will still be made in New York, the sales teams will still be knowledgeable and attentive and the quality will only increase, he said. The brand only uses diamonds graded D, E and F.

Men’s jewelry is a new, but small category for Winston. A collection of cuff links, tie clips and the like by men’s wear designer Thom Browne recently hit stores.

The company is getting more serious about watches — launched under Ronald Winston’s direction in 1989 — as well. They are sold at 160 retail doors worldwide, in addition to the Winston network of stores.

It has also opened its own timepiece facility in Geneva. The facility, designed by Patrick Reynaud and Philippe Gaillard in conjunction with Frédéric Legendre, has 100 employees and is based in the watchmaking district in Plan-les-Ouates. Production, excluding dials, international sales, marketing and other offices, will be there. O’Neill said there are no plans to alter the exclusive watch distribution. Like Cartier, the firm’s jewelry is not wholesaled.

An issue that has arisen along with the high-profile growth of high-end diamond jewelry companies is that of security. In October, several armed, masked men stole about $28.2 million in gems in broad daylight from the Harry Winston Paris store. Nobody was hurt and no arrests have been made.

“It’s the cost of doing business,” said O’Neill, who explained the company’s security is tight and high-tech. “A company could risk being vulnerable, if they don’t take the proper measures. We vet our customers carefully and don’t spare any expense. Our priority is to make sure our staff is safe and feels safe.”