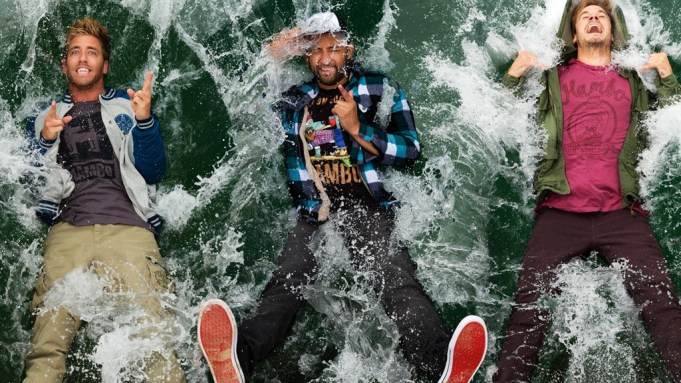 Saban has acquired Australian fashion and lifestyle brand Mambo for an undisclosed amount. Mambo, which has a skate and surf following, is unique in that it also fosters wearable, and often irreverent, art featuring artist collaborations on its fashion merchandise.

Established in 1984 by Dare Jennings, Mambo celebrated its 30th anniversary last year. The brand designed the Australian uniforms for the 2000 Sydney Olympic Games, and the National Gallery of Victoria, in Melbourne, is featuring artwork from Mambo’s archives from the past 30 years as part of its fashion and textiles exhibition.

Industry sources said Mambo has a global retail volume of $125 million to $150 million, and wholesale sales estimated at $50 million. It targets consumers between ages 16 and 29. The company, strong in T-shirts, boardshorts and bikinis, has expanded its offerings to include hoodies in the winter months, denim all year-round and accessories such as sunglasses and backpacks.

In the past few years, surf and skate brands seem to be on a collision course for a wipeout, with Australian brands Rip Curl and Billabong having considered takeover offers. Billabong, which wrote down the value of its brand to nearly zero last year, once had more than 600 stores in its heyday. The store count now is in the 425 range. The company is in the process of rebuilding the brand and store network after cutting down its debt load by about $333 million. American firm Quiksilver inked agreements to sell its Rossignol ski unit, as well as its majority stake in online retailer Surfdome. In contrast, Mambo doesn’t sponsor surfers, nor does it hold surf events.

Angus Kingsmill, managing director for Mambo, explained one of the advantages he thinks Mambo has over its competitors: “The surfwear brands took [themselves] too seriously. It was all about the wave, logos and loving surf. Surf is part of a bigger lifestyle [at Mambo]. We bring on freelance artists and do it on such a scale that the investment is on the quality of the artwork on Ts and boardshorts.”

Kingsmill called Mambo the “cheeky young brother” of the other surf brands, one that’s more about art than surf. He said operations are kept “tight,” with a focus on art and design. When the company saw its competitors focused on investments in retail stores, the firm elected to move in a different direction. “We didn’t think that stores were our core capability, and one lesson of that is our movement toward a licensing model.”

Kingsmill said the licensing model is a more perfect complement linking to the artistic talent of its collaborators as it built its global footprint with tie-ins to local artists and their followers. The company has relationships with artists around the globe, and its most recent deal is one with DC Comics.

While the DC Comics collection features artwork for its gallery of superheroes and super-villains using a Mambo logo reference, most of the traditional arrangements involve different artists doing a few pieces each season. The artists are given free rein for their designs, Kingsmill said. Price points for a T average $25, and are $68 to $72 for a bikini. Dollar amounts have been converted to U.S. dollars at current exchange.

Kingsmill will stay on at the company, directing a team of 15 out of Sydney, which is expected to grow under Saban’s ownership.

According to Castle, any brand that Saban owns has to have the “ability to expand across multiple categories, with a unique perspective and following that allows Saban to leverage its resources across its entertainment and lifestyle divisions to create a global brand.” In the case of Mambo, a key priority at the outset will be to improve the brand’s Web site and the content available. The expansion can be done internally and, through the alignment of Mambo’s existing staff and Saban’s expertise, will evolve Mambo into both a vertical operation and content-production company.

Other opportunities for Mambo apparel include a kids’ line, Castle said. Possibilities down the road, on the entertainment front, include a documentary on the Mambo brand in fashion and textiles and, in the kids’ arena, product placement for a television show.