Nearly three months after its deal to merge Sally Beauty Co. with Regis Corp. collapsed, Alberto-Culver has decided to split itself into two pieces. 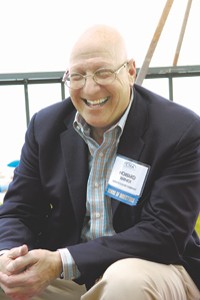 NEW YORK — Alberto-Culver has moved to plan B.

Nearly three months after its deal to merge Sally Beauty Co. with Regis Corp. collapsed, Alberto-Culver has decided to split itself into two pieces, selling a portion of its beauty supplies distribution business to the private equity firm Clayton, Dubilier & Rice. Going forward, Alberto-Culver will focus its business on its consumer products portfolio.

“Alberto-Culver will be a strategically focused consumer product company with $1.4 billion in sales,” company Culver president and chief executive

The move rekindles Alberto-Culver’s ambition to go back to its roots as a consumer products company and is intended to alleviate conflicts between its consumer products arm and retail and distribution businesses.

Alberto-Culver shareholders will own approximately 52.5 percent of Sally Beauty Co., which will become a new public company listed on the New York Stock Exchange. CD&R will invest $575 million to acquire an equity stake of 47.5 percent in Sally Beauty Co., which includes 2,465 Sally Beauty stores, 825 Beauty Systems Group outlets and a direct sales force of 1,181 people calling directly on salon customers. The transaction value, including $1.85 billion of debt arranged by Merrill Lynch & Co., is approximately $3 billion.

The deal essentially emancipates Alberto-Culver’s two operating segments, namely its consumer products division and Sally Beauty businesses, from one another, according to A.G. Edwards & Sons analyst Jason M. Gere. He added that, had the private equity firm acquired more than 50 percent of the Sally business, the change in ownership would trigger a significant tax liability for Alberto-Culver shareholders.

During the conference call, Bernick said the move sought to resolve inherent conflicts between the two businesses, noting that BSG’s major vendors — including Procter & Gamble and L’Oréal — were Alberto-Culver’s “archrivals.”

He added that, as Sally’s retail business grew and tried to attract customers from the mass market — Alberto-Culver consumer brands’ main turf — the conflict between the businesses grew.

This story first appeared in the June 20, 2006 issue of WWD. Subscribe Today.

“Splitting the company alleviates these channel conflicts, and also allows each business to pursue the appropriate acquisitions, which would very likely aggravate channel conflicts even further if the status quo was maintained,” said Bernick, who will retire from his post as ceo and from the company’s board after the spin-off is completed. The transaction, subject to shareholder and regulatory approval, is expected to be completed in the fourth quarter of this year.

Carol Lavin Bernick will retain her role as executive chairman, and V. James Marino will shed his current role as president of Alberto-Culver Consumer Products Worldwide to assume the post of president and ceo, succeeding Bernick.

At Sally Beauty Co., Gary Winter­halter will continue as president and, following the transaction, will assume the post of ceo and join the company’s board. Sally’s chairman, Michael H. Renzulli, has entered into a three-year consulting agreement through 2009 with the company. CD&R will designate six of the 12 directors to be appointed to Sally’s board, including the chairman. Sally will continue to be headquartered in Denton, Tex.

“Sally has many compelling strengths, including a talented management team and an extensive store footprint throughout North America,” stated Richard J. Schnall, the CD&R financial partner leading the transaction. “The company’s geographic reach, skilled sales force and broad product offering are highly valued by both beauty professionals and retail consumers.”

Historically, CD&R has focused many of its investments on segments, such as Sally’s, that are considered by their parent companies as noncore businesses, explained the firm’s spokesman. For instance, CD&R acquired Jafra Cosmetics, a direct seller of personal care products, from Gillette in April 1998. After growing earnings to $69 million from $19 million, the firm sold Jafra Cosmetics to Vorwerk, a Germany-based direct marketing company, in 2004. The firm also led a group of investors in the purchase of Hertz Corp. from the Ford Motor Co. in December. The CD&R spokesperson noted the firm has had Sally on its radar screen for the last five years, and has had various conversations with management about its interest in investing in the business.

The split of Alberto-Culver and Sally marks the personal care firm’s solution to its defunct deal with Regis, which called for Alberto-Culver to merge Sally’s stores, BSG outlets and sales force into Regis’ $4.5 billion salon business. The merger unraveled in April when Regis rejected the deal after Alberto-Culver’s board had misgivings about Regis’ 2007 outlook and declared that it no longer supported the transaction.

Bernick commented that the firm’s two segments had reached sufficient size to be “viable stand-alone entities,” and, while the Regis deal would have solved their strategic issues, the split offers better operating earnings for Alberto-Culver shareholders.

With Alberto-Culver going up against mass market giants such as Unilever, P&G and L’Oréal, several analysts speculated that the company may be positioning itself to be acquired by a larger firm.

On his retirement, Bernick commented: “After a very rewarding 30-year career, including 12 years as ceo, I will be retiring from my position and from the Alberto-Culver board of directors after the transaction is accomplished, which is expected to be in December of 2006.