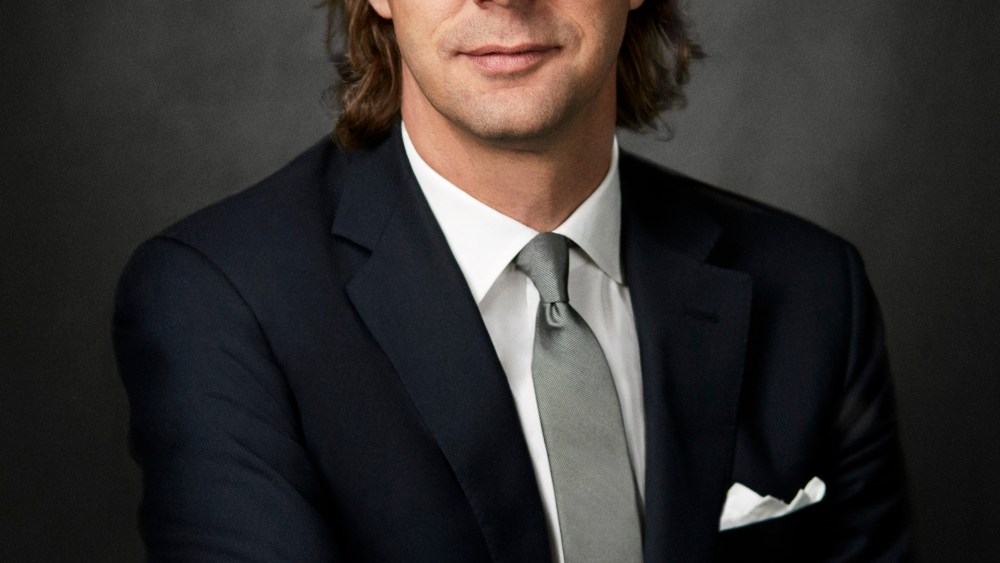 “When it comes to products Made in America, it is an area we are exploring. We are doing tests,” said the company’s chief executive officer Stefan Larsson at the annual shareholders’ meeting Thursday morning at the St. Regis Hotel here.

Larsson noted that the jacket Olympic gold medal swimmer Michael Phelps wore as flag bearer in the Opening Ceremony has illuminating capabilities and how the company has been working with a wearable-tech firm from America. The basic jacket was made in Rochester, N.Y., at the Hickey Freeman factory and then sent to a Flex facility in Texas to add the electroluminescent panels on the front and back.

The disclosure that Lauren was exploring more Made in America product came after Larsson’s presentation to the attendees and a shareholder during the question-and-answer session commented about doing more production in the U.S.

Ralph Lauren, chairman and chief creative officer, opened the annual meeting by saying simply, “Hi. I’m Ralph Lauren.” After introducing board members and leaving some time for routine business matters, the chairman made it clear through the introduction of Larsson that the meeting represented the next new chapter in the history of the company the designer founded 50 years ago.

As for relinquishing the reins as ceo, Lauren said it’s been “interesting in giving up the ceo” post, adding that the company has been “my baby.” He explained to shareholders that having a new partner and a new ceo is all “about the future.”

Looking ahead at that future and at the challenges at retail, Lauren said, “I see big changes….I think it’s a lot more complicated, a lot more interesting.”

In introducing Larsson, 41, Lauren also said of their first meeting that he wondered, “Why am I interviewing this guy, who I know is from another company that’s not at all like my company?” That was last year, and after working together for nine months, Lauren told shareholders that he’s concluded Larsson, who joined from Old Navy and previously was at H&M, is a “great guy.”

Larsson, who said it felt a “little unreal still that I’m [here] with Ralph Lauren,” explained to shareholders that his role as ceo and Ralph’s partner is to lead the team on executing on Ralph’s vision. Noting that in the current retail backdrop how it’s never been more important to be a strong brand, Larsson emphasized that the Ralph Lauren brand has what few others have been able to build — a combination of being unique and iconic.

Before going into the changes and initiatives called for under the Way Forward Plan, disclosed in June to Wall Street analysts, Larsson showed a few black-and-white photos of Ralph with his wife Ricky and their then young children, David, Dylan and Andrew. The ceo said whenever he sees the photos, he thinks of the words “style” and “timelessness.”

“I can’t tell which summer this was taken. Last summer? Fifteen years ago, 20 years ago?” Larsson said, honing on his point that the photos are classic family pictures that could represent any time period for any American family. Another one made him think of a family “dreaming of a better life, a life of style,” the ceo said, noting it was analogous to his wishes for his own family: “I have three small kids myself. This is relatable to my life and what I dream about [for my family].”

For Larsson, the photos he showed represent a “back to the future” look at the company the chairman founded based on an aspirational lifestyle, and why the brand is still a strong one that resonates with consumers: “Ralph created a dream that is relatable.”

Larsson said in the past year, the company had 150 covers in magazines globally. The company also had 3,000 nonpaid editorials online and off-line, which in turn resulted in 28 billion media impressions. “That translated to a paid media value of a half-a-billion” dollars, Larsson said.

He emphasized to shareholders that as the company embarks on the still-early stages of the restructuring to reflect the changing marketplace, “some things won’t change. The dream of a better life won’t change, but how you access that will change.”

In a compressed version of the Investor Day presentation made to analysts in June, Larsson said the Way Forward Plan in its “most simplest term is building the business to match the strength of the brand, and in doing that to grow the brand.” He said the two keys are a refocus on the core — the Ralph Lauren and Polo Ralph Lauren brands — and evolve the operating model. For the first part, that revolves around “doing more of what is our core DNA and more of what the consumer likes.” He spoke about cutting lead times, and testing product — “Is it a cash cow?” — plus adding an eight-week pipeline parallel to the cut in lead times. For the operating model, the focus is on creating the best product while balancing cost efficiencies, as well as increasing flexibility and speed.

As for the company’s push to get back to the entrepreneurial mindset, Larsson said, “Our goal is to work like a small company.” He spoke of cutting layers to empower the “doers” and said the whole plan creates a virtuous cycle of building brand strength.” From a shareholder perspective, the ceo said the company “has a commitment to return excess cash.”

He also showed a clip of a commercial that the company is running on television “for the first time in a long time” in 10 cities that includes select Olympians and reflects the company’s support as the official outfitter for the U.S. Olympic team.

In the Q&A session, Larsson said, “I’m a big believer in the department store. A well-run department store solves a big consumer challenge,” noting that the consumer is time-challenged and having many things in one place can be a benefit. He also added that the company is analyzing what its mix should be between wholesale, e-commerce and company-owned stores, which comes as brands from Coach to Michael Kors cut back on their wholesale distribution.

He was asked how often he asks Lauren for his advice and noted that the two have a relationship where “it’s less about advice, but an ongoing conversation. It’s about where we’re going. What I’m good at is knowing what I don’t know.”

Lauren, emphasizing how the two really are working as partners, told the shareholder, “What you don’t know is how often I go into his office.”

Zeroing in on his message about the future prospects of the company, Lauren said, “The changes are about moving to where we have to go. The energy Stefan brings is new. It’s all new.…It’s very exciting.”