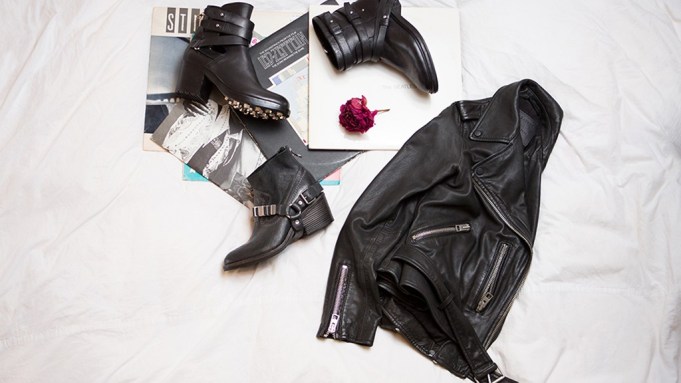 Steve Madden LTD. is on an acquisition spree, and planning on more deals ahead.

The footwear and accessories firm’s newest baby is Dolce Vita Holdings Inc., which it acquired for $60.3 million in cash, subject to a working capital adjustment and an earn-out provision based on future financial performance. The company is not disclosing the terms of the earn-out agreement, but they typically run from two to five years. The company is also projecting that the deal will be modestly accretive in fiscal 2015, but dilutive to earnings per share in fiscal 2014 by 2 cents to 3 cents.

The transaction follows the March acquisition of the Brian Atwood intellectual property assets and the licensing partnership in June with Authentic Brands Group for Juicy Couture.

Dolce Vita was founded in 2001 by Van Lamprou and Nick Lucio, who will continue to head the business and become employees of Steve Madden. The privately held Dolce Vita, which had 2013 net sales of about $111 million, specializes in the design and sale of branded and private-label footwear. The company-owned brands are Dolce Vita, DV by Dolce Vita, DV8 and J.D. Fisk, which are sold to wholesale accounts that include better department stores and specialty boutiques, as well as direct-to-consumer.

Steve Madden remains on the prowl for more deals, according to Edward Rosenfeld, chairman and chief executive officer. “We’re pretty open about the size of the acquisition. We have the wherewithal to do things much bigger than this one, but we’re also looking at smaller deals, as well.”

The chairman said the company is looking to add brands to its portfolio, but is interested in other types of transactions, too. As an example, Rosenfeld said, “We may acquire one of our international distribution businesses, which we did in Canada a few years ago. Or we could acquire something in an adjacent product category.”

He explained that the company already has a wholesale accessories business in handbags, and while the group could acquire a handbag firm, it would also consider another accessories category such as jewelry or sunglasses.

Despite the acquisitions so far and investment required for those deals, Rosenfeld was emphatic about the firm’s ability to continue to buy.

“We’re fortunate that we have a very strong balance sheet. We generate a lot of free cash flow. Even after completing this deal, we will have over $200 million in cash and no debt. There is plenty of capital to make the necessary investments,” he said.

The chairman also didn’t rule out another deal before the year is out.

When the company reported second-quarter results on July 31 for the period ended June 30, it had $282.7 million in cash, cash equivalents, and current and noncurrent marketable securities.

Steve Madden, founder and chief creative officer of his namesake firm, said of the latest transaction, “This is very exciting. Dolce Vita is a great company, with great people.”

He said the company is “very comfortable with the [Dolce Vita] management team,” noting that Lamprou once worked at his firm years ago.

The acquisition furthers the company’s plan to expand into contemporary footwear, particularly those brands at the opening price point range. For now, Madden said the immediate focus will be to grow the direct-to-consumer business. A Dolce Vita flagship could also be a possibility down the road. Dolce Vita doesn’t have any stores at the moment, but at one point in 2007 it had three, in New York, Los Angeles and in Santa Monica, Calif., when it also tested an apparel line.

According to Lamprou, “We’re really excited about partnering with the Madden team. They have the expertise. Nick and I are product guys. Retail is not our strength, and apparel is not our strength. That is part of what makes our partnership with Steve Madden exciting.”

Lucio added that the immediate focus for the Dolce Vita brands will be on “product and creative vision,” with the two founders working with the Madden team over the next few months to fine-tune the strategy going forward.

Dolce Vita is the higher-price footwear line, with retail price points at $159 to $179 and is sold at Nordstrom, Bloomingdale’s and Macy’s. DV by Dolce Vita is more moderately priced at between $79 and $89 and is available at a broader base of retailers. The DV8 line, averaging $39 at retail, is the opening price point line.

J.D. Fisk is the comparable Dolce Vita line for men’s, and has an average retail price point of $200.