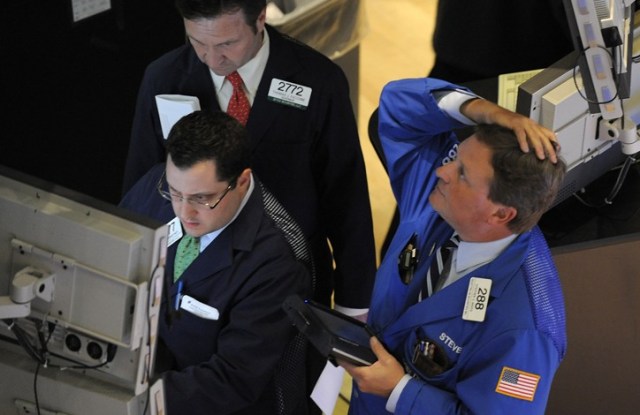 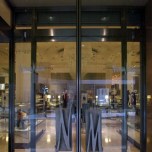 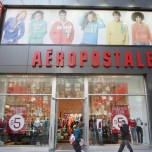 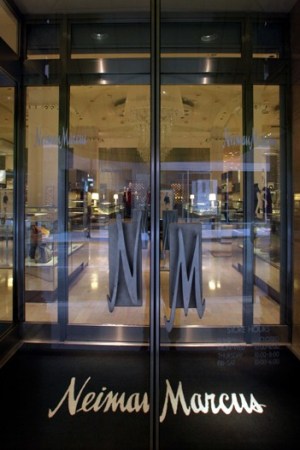 The entrance to the Neiman Marcus flagship.

Weak same-store sales in April proved to be merely a footnote to a day of wild gyrations on Wall Street and declines in Asia and Europe, as fears continued to grow that Greece’s economic ills could send the global recovery shuddering to a halt.

The Dow Jones Industrial Average fell almost 800 points at one point in late afternoon trading before closing the day with declines of 3.2 percent to 10,520.32.

The S&P Retail Index ended the day at 451.06, down 16.58 points, or 3.6 percent, but was off as much as 8 percent before bouncing back. Following their third consecutive day of declines, and their second double-digit point decline of the week, retail stocks are now down 5.1 percent for the week and their year-to-date advance, more than 20 percent during the third week of April, has been reduced to 9.7 percent.

The notion of an economic turnaround clearly suffered under the influence of Wall Street’s nightmarish day and retail’s disappointing month. April retail sales had been expected to come in weaker than the robust levels logged in March, but many stores failed to meet even those modest expectations. Lurking in the background was the knowledge that the Labor Department today will issue its report on unemployment figures for April.

While Thursday’s comparable-store sales results in the U.S. could hardly explain the day’s distressing market activity, they did little to shore up confidence. After spending voraciously in March, April’s results constituted a relative drought. Despite admonitions from retailers to take the last two months and view them together to neutralize the effect of an early Easter — good for March, bad for April — analysts were clearly disappointed by the April numbers, many of which fell short of modest expectations. While the calendar shift and cold, damp weather in the West and other parts of the country shoulder some of the blame for the anemic results, analysts wondered if recent pullbacks on the stock market and fears about Greece contributed to April’s poor showing at retail.

“I think April is indicative of what’s going to be a very jerky recovery,” said Sherif Mityas, partner in the retail practice of A.T. Kearney, a global management consulting firm. “Overall, what you’re seeing is a recovery that is going to come in fits and starts.”

Recent news from Greece and elsewhere in Europe have left Americans with “an uneasy feeling,” he said, and the weakness of Wall Street in the past few weeks has made consumers, some just starting to get back their taste for shopping, a bit nervous.

Mityas expects a sense of unpredictability to linger into the fourth quarter, at which point the pace of the recovery will be clearer and the actual “winners and losers” coming out of the recession more obvious.”

“Everything is still very fragile right now, so it makes me a little bit nervous as to what might spook the consumer,” said Brendan Hoffman, president and chief executive officer of Lord & Taylor. “But over the last 90 days, we’ve seen no evidence of that. We see the consumer coming back. Our business is strong across the board.” L&T’s sales rose 14 percent in April and 15 percent in the first quarter, he said.

“Overall, we’re passed the worst,” said Arnold Aronson, managing director of retail strategies at Kurt Salmon Associates. “It will take time. It will be an evolution.”

“Europe is a blinking yellow light. It’s not yet a red light,” he said, noting retailers are “going up against the steepest declines in 2009.”

Underlying the contraction in the markets is perhaps the one thing that investors find least tolerable — a lack of certainty.

“Financial markets dislike uncertainty,” said George Wallace, ceo of Management Horizons Europe. “What they see is not the failure of the Greek economy per se, but the fact that Greece is part of the Eurozone, and that clearly not all of the countries in the zone are aligned — some are prudent and some are reckless. They are also sensing that this could be a turning point and that other countries — like Portugal and Ireland — could be vulnerable, as well.”

Adding to the sense of uncertainty was word after the U.S. markets closed that Thursday’s election in the U.K. would likely produce a hung Parliament, with the Conservative party ready to claim a plurality but not majority of the seats in Parliament. While austerity in the U.K. might not come as a surprise, “an indecisive election result will mean horrible uncertainty for markets right now,” said Wallace.

Yet, he said the economy itself is “performing quite well, and I don’t think the turmoil will affect the performance of the brands, retailers or consumers. In the U.K., unemployment has stopped rising. I think the Spanish and Portuguese consumers, on the other hand, might be thinking, Are we next?”

All that contributed to the slide Thursday on Wall Street, although the worst of the sell-off came upon the markets suddenly and rather unexpectedly as the final hour of trading neared. Wild swings in blue-chip stocks caught many off guard. Shares of Procter & Gamble Co. fell nearly 37 percent at one point during the plunge, and rumors of errant and bogus trades — and even hacker-influenced electronic trades — spread quickly from the trading floors in lower Manhattan after it dropped below its circuit-breaker level. The New York Stock Exchange declined to comment on P&G’s decline and the company’s shares rebounded to end the day down just 2.3 percent at $60.75.

The Chicago Board of Options Exchange’s volatility index, known as a gauge of Wall Street’s fear level, shot up as much as 63 percent Thursday. In other markets seen as sensitive to market flux, the euro fell to $1.26, crude oil prices declined 3.6 percent and gold future rose nearly 2 percent to $1,197.30 an oz.

The Securities and Exchange Commission and the Commodity Futures Trading Commission said late Thursday they were working with financial regulators and the exchanges to review the “unusual trading activity that took place briefly this afternoon.”

Even with their rebound late in the session, retail stocks had their worst day of 2010 and their sharpest decline since the 3.7 percent sell-off of Aug. 17. The S&P Retail Index hasn’t had a decline of more than 4 percent since March 2, 2009, and, had it stayed at its low point for the day, down 7.3 percent, it would have been its worst showing since the 9.3 percent pullback of Dec. 1, 2008.

“Greece is now the Lehman,” said Paul Nolte, managing director at Dearborn Partners in Chicago, referring to the 2008 fall of investment bank Lehman Bros. and the resulting dramatic market decline. “Nobody was quite sure how this was going to move around the world and that is what we’re seeing right now. It is the fear factor more than anything else. What you’re seeing is indiscriminate selling in the marketplace.”

Greece isn’t the only worry, however. Manufacturing data from China on Tuesday caused Asian markets to wobble on fears the rebound there might be losing some steam. A United Nations report released Thursday disputed that notion, predicting that, spearheaded by robust growth in the world’s largest emerging economies — China and India — Asia-Pacific nations are forecast to grow this year by an average 7 percent, up from last year’s 4 percent.

The study projects China will expand 9.5 percent this year from last year’s 8.7 percent growth, and India will surge ahead 8.3 percent, also up on last year’s 7.2 percent growth rate. The report is also upbeat about the outlook for other economies in the region, including major apparel exporters Vietnam, Sri Lanka, Cambodia, Turkey and Bangladesh.

The report said Bangladesh’s apparel and textiles industries last year continued to expand because the South Asian nation “largely produces for the lower end of the market, which was less affected by the downturn.” Bangladesh’s exports grew 10.3 percent last year.

But the survey from the U.N. Economic & Social Commission for Asia and the Pacific warns it is unlikely to return to business as usual, with export-led growth the key driver. Western nations are expected to import less, it says, and economies in the region have to boost domestic demand to stimulate growth.

“Import demand from the United States is not expected to play the buoyant role it did in the past decade,” it notes.

Surveying the various headwinds and tailwinds of the global economy, A.T. Kearney’s Mityas advised: “The one word I would use for retailers is patience. Don’t sound the alarm, but don’t open your wallets, either.”

His view was echoed by U.S. retailers, who seemed to prefer to overlook April’s figures. On Thursday, upscale retailers were clearly among the winners, as Neiman Marcus Inc., Nordstrom Inc. and Saks Inc., among those hardest hit during the depths of the recession, posted comp gains of 13.7 percent, 7.5 percent and 3.2 percent, respectively.

Outside of those three retailers, only one department store company, Macy’s Inc., with a gain of 1.1 percent, managed an increase. J.C. Penney Co. Inc., Kohl’s Corp. and Dillard’s Inc. all felt the March-April disparity sharply, posting declines of 3.3 percent, 7.7 percent and 5 percent, respectively, following March increases of 5.4 percent, 22.5 percent and 9 percent.

On average, department store comps decline 0.4 percent for the month, according to WWD’s tabulations.

Specialty stores averaged a 3.6 percent decline last month, and some of the most eye-opening drops came from two youth retailers with long traditions of overperforming in the sector. The Buckle Inc. was down 5.7 percent and Aéropostale Inc. off 5 percent.

However, that didn’t prevent Limited Brands Inc.’s Victoria’s Secret chain from registering a 7 percent comp jump, although the Bath & Body Works unit was down 1 percent.

“I’m unconvinced there’s a product turnaround going on at Gap,” said Weeden & Co. analyst Amy Noblin. “American Eagle taught us that you can’t turn around a brand with just denim.”

American Eagle Outfitters Inc. was down 6 percent and Abercrombie & Fitch Co. finished the month down 7 percent.

Although the strong momentum from the last few months petered out in April, Lazard Capital Markets analyst Todd Slater took an optimistic view of the situation.

“April is the pause that refreshes. April looks to be a bit of a letdown, with comps coming in largely below expectations,” he said. “Since the market is extremely anxious about external macroeconomic events, some will interpret the weakness in April as the beginning of a consumer retrenchment, but we think it more likely that April represents a pause in the action after wildly positive trends in March, in which consumers filled their closets early, thanks to favorable weather and the early Easter.”