The app lets anyone be an influencer.

The Storr app lets anyone open their own digital marketplace, selling new products.

Storr, the app that lets anyone curate their own digital retail operation, has secured an additional $3 million in funding from venture capital firm Spark Capital, bringing the total money raised to $7.8 million.

The platform, which launched in January with just 600 accounts — names like influencer Something Navy, model Rocky Barnes and Victoria’s Secret Angels — is also opening up the platform to the general public on Tuesday. That’s good news for the more than 30,000 people currently on the waitlist hoping to open their own digital Storr.

The premise is simple: Anyone with a cell phone can open their own e-commerce site. Users curate a dashboard of things they think others should buy. They have 175 brands to choose from — up from about 50 when the app launched. Names like slipper company Birdies, Solid & Striped, Spiritual Gangster and fashion designer Prabal Gurung. Account holders write a quick informal description of what they think about the products. And unlike other peer-to-peer marketplaces, such as eBay and Amazon, sellers are promoting new stuff — products they may have never touched or used before.

Shoppers can buy products directly from the Storr app. The brands take care of shipping and inventory and give sellers anywhere from a 15 to 30 percent commission on products sold. Storr account holders can pocket the profits or use the money to buy other things on the platform. The Storr team takes a 5 to 10 percent cut from each sale. 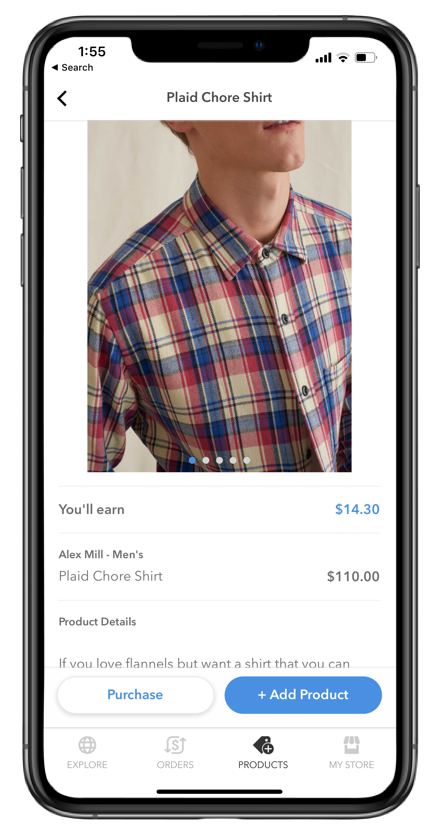 Storr account holders receive a 15 to 25 percent commission off each item sold.  Courtesy

Eric Senn, founder and chief executive officer of the Storr app and San Francisco-based company by the same name, came up with the idea for the platform after realizing that people’s friends had more influence over their shopping habits than celebrities.

“Product recommendations don’t come from celebrities or influencers as much as they do from people’s peers,” he said.

In fact, he estimated that about a quarter of U.S. shoppers — especially Millennial consumers and younger — are much more likely to make purchases because of peer pressure or based on things they saw on social media. He developed Storr as a way to capitalize off this trend.

“You could think of it as a side hustle,” Senn said.

“At Spark, we believe that amazing products create markets, not just find market fit — and that’s why we’re so excited about the momentum that Storr has gained so quickly,” Kevin Thau, general partner at Spark Capital, said in a statement. “I love the product, the team is incredible and the vision is market changing.”