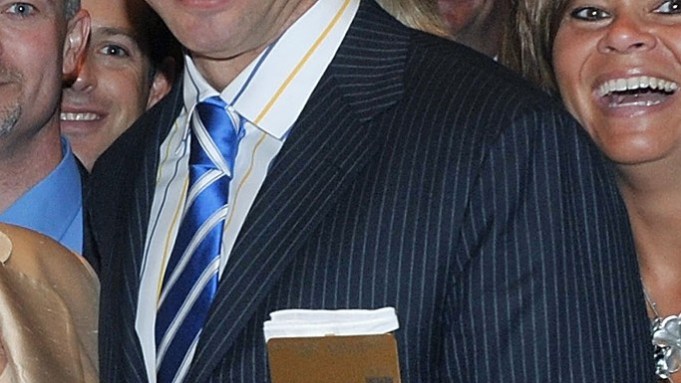 The Jones Group Inc. is about to have a new owner — and fashion gets a new empire builder in Stefan L. Kaluzny.

The contrarian risk taker and managing director of Sycamore Partners inked a deal late Thursday to buy Jones for $15 a share, or $1.2 billion. The transaction includes $1 billion in debt, for a total value of $2.2 billion.

Jones is a big fish for Kaluzny, 47, to reel in and moves Sycamore into a new league. The private equity firm already controls Hot Topic, Talbots and an apparel sourcing business. The Jones deal brings annual sales of $3.75 billion, 35 brands and more than 500 doors, most of them outlets.

The company has been on the block for much of this year. The deal turned out to be very complicated to negotiate and took longer than many expected.

“We look forward to a successful partnership with the company’s talented associates as we continue to serve The Jones Group’s many loyal customers,” Kaluzny said in a statement from the company, which offered few specifics about the future.

A source close to the transaction said Jones would be split in to four companies under the Sycamore umbrella: the legacy footwear business and the denim business; an apparel company including Jones New York; Kurt Geiger, and Stuart Weitzman. It is Geiger and Weitzman that are seen as Jones’ most-promising units.

Observers expect some trimming at Jones — among both businesses and executives.

Kaluzny was said to have personally interviewed Jones’ top players ahead of the deal as well as outsiders who could take on a leadership role at the group. Anthony Romano, former president and chief executive officer of Charming Shoppes, is rumored to have been considered for a top spot. He could not be reached for comment.

G-III Apparel Group is said to be keen on the Jones New York and Anne Klein brands, while Nine West licensee Sherson Group has expressed interest in the moderate footwear portfolio and Rachel Roy and partners are said to be interested in buying Jones’ stake in the designer business.

Jones said the deal represented a 19 percent premium for shareholders, when compared with the weighted average for its shares in the 30 days before speculation of a sale cropped up in April.

“This transaction is a result of diligent analysis and thoughtful strategic deliberations over many months with the assistance of our advisers,” said Wesley Card, ceo of Jones. “Sycamore Partners is an experienced investor in the retail sector, and, as a private company, Jones will have the flexibility to help our brands reach their true potential.”

Jones, which had been closing stores and working to right its namesake Jones New York business, was being pressured to boost profitability. Activist investor James Mitarotonda, head of Barington Capital Group, agitated for change from without and ultimately joined Jones’ board in June.

Citigroup Global Markets was hired to help the company test the market, setting up a process that involved a revolving cast of characters and explored a range of options, from selling the whole company to finding separate buyers for the footwear and apparel businesses.

Sycamore, which was advised by BofA Merrill Lynch and Guggenheim Securities, was said to first look at the apparel business and then the footwear business before deciding to buy the whole company.

Kaluzny has kept a low profile in the fashion industry, weighing in only with short statements when he’s acquired companies.

He received a B.A. in history from Yale University, and an M.B.A. from Harvard Business School. He went on work as a consultant at private equity firm Bain & Co. and then to conceive and cofound Delray Farms, a Hispanic specialty food company he grew from start-up to $100 million in three years. In 2000, he joined Golden Gate Capital, where he had a hand in investments across a number of industries, including software, semiconductors, consumer products and retailing.

Out on his own, Kaluzny orchestrated a rapid-fire succession of deals, beginning with a 2011 move that brought him a 51 percent stake what was then the Limited Brands’ sourcing business and is now MGF Sourcing. Following quickly was the 2012 Talbots deal, which brought in $1.14 billion in sales and 544 stores, and then this summer’s Hot Topic takeover, adding another 813 doors and $741.7 million in sales.

And Jones might not be the end of it.

One financial source said Sycamore was the lead candidate to acquire The Men’s Wearhouse Inc.’s 94-door K&G division, which is on the block.

Sidney Kimmel founded the Jones Apparel division of W.R. Grace & Co. in 1970 and serves as chairman. Kimmel led the business as it grew to become a Seventh Avenue stalwart that now covers the fashion waterfront from designer-priced footwear to moderate apparel. Card has served as ceo since 2007.

Kimmel said he was pleased with the deal and noted, “I am proud of our heritage and believe The Jones Group’s brands will thrive through our partnership with Sycamore.”

The buyout is expected to be completed in the second quarter next year. Jones’ board unanimously approved the deal, which shareholders and regulators will also have to sign off on. Card and Richard Dickson, president and ceo of the company’s branded businesses, together own 2.9 percent of the firm’s stock and agreed to vote their shares in favor of the deal.