Synching Up With Fashion Shoppers

"Buyers frequently experience no greater satisfaction with their purchases whether they spend more or less time considering them," write AnnaMaria Turano and John Rosen in their just-published book, "Stopwatch Marketing." 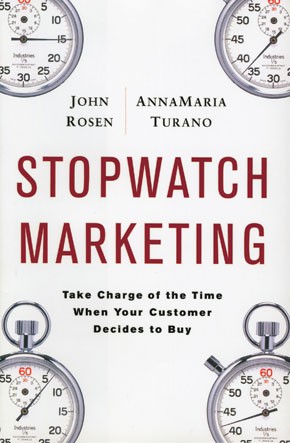 “Buyers frequently experience no greater satisfaction with their purchases whether they spend more or less time considering them,” write AnnaMaria Turano and John Rosen in their just-published book, “Stopwatch Marketing.”

In other words, it will take more than catering only to the 21st century’s well-chronicled, time-pressed consumers for stores to build a robust clientele.

The X factor, in the eyes of the author/marketing consultant team, is the different ways in which people like to use their time when they shop. These mind-sets, as described by Turano and Rosen, run from the extremes of recreational or impatient sensibilities to ones that are painstaking or reluctant. Rush a recreational shopper or bog down an impatient one and the opportunity to do business could quickly be lost.

In the realm of fashion, apparel customers tend to start out as recreational shoppers when they’re young and grow into ones who are impatient or painstaking, Turano said in an interview. “The younger the consumer, the more recreational the shopping tends to be,” she related. “This is especially true for females, but it’s true for more males now, too. The over-30 crowd becomes more painstaking and impatient, as the value they’re seeking and the time they have to invest become bigger priorities.”

While at first blush it seems an economic tailspin would reset people’s inner shopping watches — perhaps transforming recreational shoppers into reluctant ones, or impatient customers into painstaking types — Turano insisted this is not typically the case. “What shifts is the venue, not the mind-set of the shopper,” the author said. During an economic downdraft, the person who typically spends a few hours shopping and having something to eat at Bloomingdale’s is likely to stay in recreational mode, but might head for a store like Syms instead, she projected. (There haven’t been big shifts as yet. A nationally representative NPD Group survey in February found people were not shopping in different venues than usual, because they felt relatively secure about their jobs and pay.)

Victoria’s Secret’s boutique lingerie setting, Whole Foods Market’s sense of theater and Apple’s offer of Genius Bar experts to answer questions are among the store environments Turano considers likely to appeal to recreational shoppers, as they encourage people to immerse themselves in an experience.

Many fashion shoppers bounce back and forth between being impatient or painstaking, the author-consultant has found.

By noting workmanship details of a product or providing the history of an item’s design or brand, effective appeals can be made to the painstaking shopper, said the 37-year-old Turano, who characterized her own mind-set as painstaking when she and Rosen were writing “Stopwatch Marketing (Portfolio, $25.95.)”

At gucci.com, the story of the first Gucci Heritage collection, which was launched in conjunction with the opening in February of the brand’s new Fifth Avenue flagship, fits Turano’s prescription for a painstaking consumer. “Conceived by creative director Frida Giannini, Heritage…pays tribute to the Italian brand’s history,” the Gucci Heritage story begins, adding her inspiration came from the brand’s archives. Giannini resurrected several iconic handbag styles, as well as a print, “Leonardo,” exclusive to the Manhattan flagship.

Stores well equipped to serve a helping of convenience to the impatient, in the author’s view, include Brooks Brothers, Mitchells of Westport and e-tailer Zappos.com. Brooks Bros. and Mitchells are among those stores providing staff who will sit down with customers and offer them advice on items that would make good additions to their wardrobes and on pieces that would work well together.

Beyond a person’s general inclination about the amount of time they prefer to spend shopping, a handful of specific considerations are a further influence: what it is they’re buying, when they’re buying it, how they intend to use it and how much they plan to spend. Shopping for a wedding dress usually takes shape in a painstaking process, one Turano said is akin to buying a mattress or choosing a color of paint for one’s walls, as it is something a woman will “live with” for a long time. Shopping for casualwear for work, items that tend to be seen as disposable, is likely to be done in an impatient fashion.

The easiest way for a store to foul up a shopper’s sense of time, the author said, is when it tries to do too much. In a high-end boutique offering apparel, handbags and sunglasses, for instance, someone buying a pair of $300 sunglasses may not receive the same attentive service as a customer interested in spending $2,000 on clothes. “This may be the only time a person touches that brand of sunglasses for a few years,” Turano posited. “The salesperson should be on the shopper’s time schedule, rather than their own time schedule.”