Tapestry Teams With Alibaba’s Tmall to Take on China

Coach, Kate Spade and Stuart Weitzman are moving to Tmall, introducing the brands to a new set of Chinese consumers.

Coach, Kate Spade and Stuart Weitzman will soon be available on China's TMall.

Tapestry is on the move.

Aside from the swift exit of former chief executive officer Victor Luis earlier this month, the fashion house is now upping the ante with its stake in the Chinese market.

Starting this month, the retailer is partnering with Alibaba’s Tmall to bring Coach, Kate Spade and Stuart Weitzman to even more Chinese consumers.

“Tapestry is committed to the Chinese market,” Jide Zeitlin, chairman and the new ceo of Tapestry, said in a statement. “Given Tapestry’s focus on customer experience, creating innovative strategic partnerships with leaders, such as Tmall, helps us to connect our unique lifestyle brands with the important fashion and digitally savvy Chinese consumer.”

The deal with Tmall, China’s largest business-to-consumer e-commerce platform, accomplishes two things: it drives digital growth across the entire Tapestry ecosystem and it introduces all three brands to a new generation of Chinese shoppers.

Alibaba’s Tmall has a user base of more than 750 million people.

Coach, Kate Spade and Stuart Weitzman will all now have stores on Tmall’s Luxury Pavilion, the platform for luxury and premium products. Tmall’s invitation-only Luxury Pavilion is “available to a select group of the world’s most-prestigious and time-tested luxury brands,” according to the Alibaba Group’s web site. The addition of Tapestry’s portfolio of brands to the platform, means Coach, Kate Spade and Stuart Weitzman will join the ranks of Valentino, Burberry, Versace, Stella McCartney, Givenchy, Ermenegildo Zegna and LVMH-owned Guerlain, among others. It also moves Tapestry from the accessible luxury category to true luxury category — at least in China.

In addition, Tapestry will be one of the first companies to incorporate technology from the new Flagship 2.0 Store format. The updated format uses new technology and customer data to create personalized content, such as putting likely purchases on the homepage and therefore reducing the amount of time shoppers need to search for products. It also allows brands to better tell their stories to individual consumers based on shopping habits.

“We’ll have a lot of flexibility in terms of how we think about personalizing the experience, whether it be the marketing experience or the assortment we’re presenting to consumers,” Paransky said.

He added that the partnership will also give Tapestry access to shoppers in slightly smaller Chinese cities, many of which do not currently have luxury brick-and-mortar stores.

Meanwhile, shoppers will have access to the full assortment of Coach, Kate Spade and Stuart Weitzman products — with some regional variations — along with products available exclusively to Tmall shoppers.

The deal also makes good on the former ceo’s promise to grow the Chinese market with the ChinaNext Initiative, which was announced during the August conference call. At the time, Luis pointed out that China’s growth potential — even amid the current political uncertainty of tariffs — is like no other country in the world.

“When you’ve got 1.3 billion people…that spells very sustained long-term growth,” Luis told WWD. “You’ve got north of 200 cities with a population of a million or more. Half of the population is still rural and moving to urban centers. And there’s an amazing infrastructure that exists to allow retail to develop. Both in the physical store and in the digital store.”

After Zeitlin took over the helm earlier this month, he told WWD that his growth strategy is largely the same. That includes continued work with local Chinese influencers, hiring digital experts to work in various markets in China and expanding partnerships, such as the current one with China’s WeChat app.

“There’s tremendous opportunity for us to drive our agenda in China and reach the Chinese consumer in a true omnichannel fashion,” Paransky said. “Then take those learnings and repackage them for other markets, like our home market.” 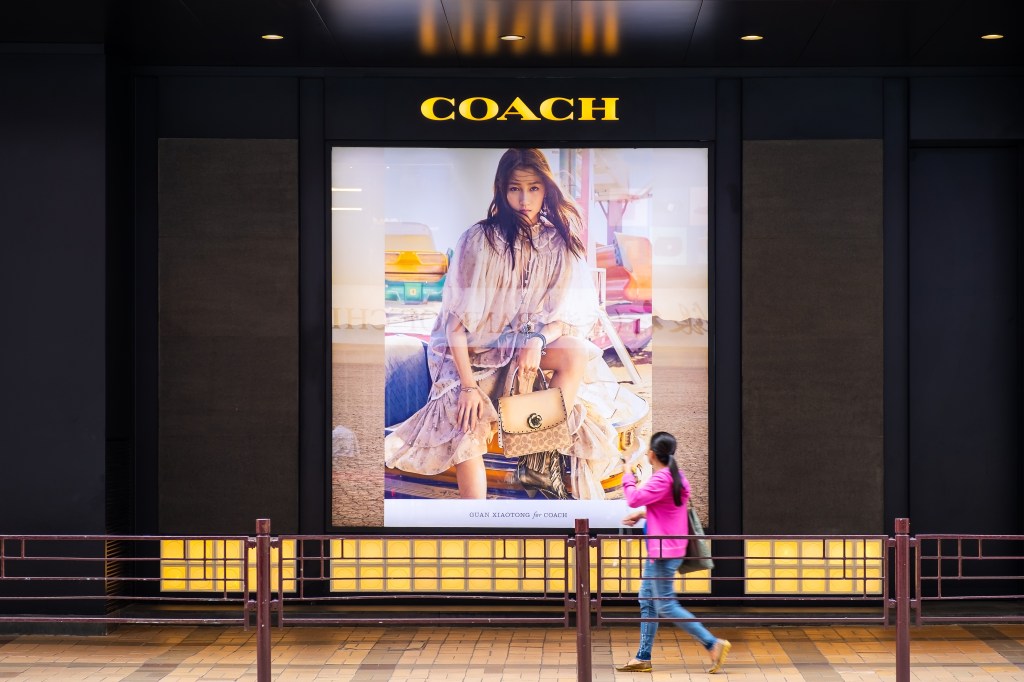 Coach, Tapestry’s largest brand, has been in China since 2009. Even so, at present, Chinese consumers represent only about 20 percent of Tapestry’s total revenues. But as online shopping continues to pick up steam and the ChinaNext Initiative develops, Andrea Shaw Resnick, Tapestry’s global head of investor relations and corporate communications, said this is just the beginning.

As proof, she pointed out that last quarter all three brands had positive comps in China.

Even so, Tapestry hasn’t fared well on Wall Street as of late. Shares are down more than 48 percent year-over-year.

Last quarter earnings, marked by disappointing sales at Kate Spade, did little to tame investor fears. Luis said at the time that the decline was a result of a challenging retail environment in North America, one that affected several retailers.

Tapestry, along with its new ceo, are now under a microscope from investors and competitors alike, waiting to see if the company can pull off its great Chinese expansion plan.

“Given the opportunity in that market, and given that they are exceptionally tech savvy or digital savvy, it really makes sense for this partnership,” Resnick said. “One of the things that China is known for is innovation.”