Tapestry Loses $652 Million for the Year, But Beats Quarterly Expectations

A Coach store in Hong Kong.

The fashion house — parent company to the Coach, Kate Spade and Stuart Weitzman brands — narrowly beat analyst expectations last quarter, while still logging a $652 million loss for the year. Tapestry’s stock shot up nearly 5 percent during Thursday’s pre-market hours, only to turn negative once the session began, closing down 1.09 percent to $15.43 a share. 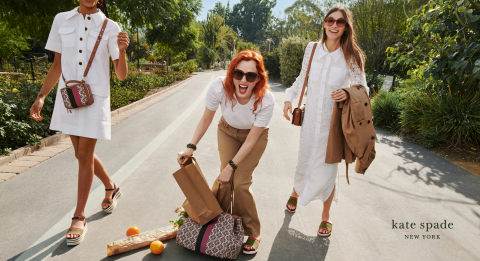 Tapestry isn’t providing forward-looking guidance, but expects to save approximately $200 million in gross run-rate expenses during the next fiscal year by way of cost-saving initiatives. Changes to the company’s operating model, for example, resulted in reduced selling, general and administrative expenses, including a 20 percent decline in the company’s corporate headcount cost and effective expense management. (Tapestry laid off approximately 2,100 people across all three brands last April and continued to trim the workforce in May and June.)

In an interview with WWD, Joanne Crevoiserat, interim chief executive officer of Tapestry, would not comment on whether or not more layoffs are in Tapestry’s future, but said the company is “looking at what we call efficiency-lead, profit expansion. That includes expanding our gross margins, as well as controlling SG&A. As we make those changes it is really with an eye on how we want to operate and better positioning us to move faster as we see trends recover and take market share.

“We’re making the changes not only in the organization, but in how we work,” she continued. “Breaking down silos, instituting cross-function collaboration and embedding data and analytics more fully in what we do to help drive more speed in our decision making and more agility as we navigate the environment.”

In a statement, Crevoiserat added that Tapestry’s better-than-expected performance was the result of the team’s ability to adapt quickly amid a rapidly changing environment.

“Looking forward, Tapestry’s next chapter of growth is ours to write,” she said. “While the backdrop remains volatile, it has not changed our long-term objectives. Rather, it has been a catalyst to accelerate our strategic agenda. Through our acceleration program, we are transforming into a world-class consumer centric organization that is more agile and data-driven with a digital-first mind-set. We believe these initiatives will create stronger connections with our customers, fueling accelerated growth and profitability for Tapestry and each of our brands.”

For the three-month period ending June 27, total company revenues were $715 million, compared with $1.5 billion last year. By brand, Coach ended the quarter with $517 million in revenues, down from $1.09 billion the same time last year. Revenues at Kate Spade were $164 million, compared with $332 million a year ago, while shoe and accessories brand Stuart Weitzman reported quarterly revenues of $33.3 million, down from $85.2 million the previous year.

Tapestry lost $294 million during the quarter, down from earnings of $149 million a year earlier. Adjusted losses of 25 cents per share for the quarter were far better than the 56 cent deficit analysts projected.

Full-year losses of $652 million compared with earnings of $643 million during 2019’s fiscal year.

But there were a few bright spots. The retailer said e-commerce sales tripled during the quarter, compared with the same time last year. Tapestry attracted nearly 1 million new customers across all three brands in North America by way of its digital channels during the quarter.

“Over time, it is clear that online will gain increasing parity with brick-and-mortar,” Crevoiserat said on a conference call with analysts. “In retail e-commerce channels, we will be making significant investment in the digital and omnichannel experience globally, while fueling aspirational brand relevance and building loyalty through co-creation.”

Things such as leather goods, pajamas and home goods were popular during the quarter at Kate Spade (the business has its sights set on becoming a $2 billion brand), while handbags continued to reign supreme at Coach.

In addition, the company said inventories declined by 5 percent, compared with a year earlier, while sales growth in mainland China returned to positive growth year-over-year during the quarter.

Tapestry ended the quarter with $1.4 billion in cash and short-term investments, including $700 million drawn down on its revolver, and $1.58 billion in long-term debt.

The company has 1,567 stores around the globe, or 958 Coach stores, 420 Kate Spade stores and 189 Stuart Weitzman stores. The majority of Tapestry’s directly operated stores reopened by the end of the quarter. Moving forward, the retailer will continue to optimize its fleet, including the closures of directly owned Stuart Weitzman stores in Europe, Australia, Japan and Malaysia.

“The role of the store is changing,” Crevoiserat said. “We know stores are important to consumers; that physical touchpoint remains important. [But] our focus is on providing the right consumer experience for each of our brands. And with that focus, ensuring that we’ve got the right experience at every touch point.”

Todd Kahn, president and chief administrative officer and company secretary, as Coach’s interim ceo and brand president, added that while there will likely be “some shrinkage” across the total store fleet in the coming year, the company is still “big believers in brick-and-mortar.”

Tapestry, like so many others in the retail industry, is still reeling from store closures around the globe earlier this year in an effort to prevent the spread of the coronavirus.

But other headwinds abound, including the loss of a permanent leader. Former chairman and ceo Jide Zeitlin abruptly resigned in July — a few months into his three-year stint at the fashion house — after a 2007 #MeToo allegation resurfaced.

The timing of a permanent leadership team moving into the c-suite is still unclear.

“We’re all very focused on the business,” Crevoiserat said during the interview with WWD. “I have the confidence that we have the right team of really strong and seasoned leaders in place, all of whom have experience and history of building businesses and brands.

“We understand that to win in today’s environment, the bar is high,” she continued. “Consumers have more choice than ever before. And consumers’ priorities are changing. They are increasingly driven by their values, are more connected and seek brands with authenticity that engage seamlessly and align with their values.”

Tapestry’s stock is down more than 38 percent year-over-year.