The retailer logged a $231 million profit for the quarter, up from $20 million the same time last year.

Coach is part of the Tapestry Inc. portfolio.

The fashion group — parent to the Coach, Kate Spade and Stuart Weitzman brands — reported quarterly earnings Thursday before the market opened, improving on bottom-line results amid a turbulent and increasingly uncertain retail landscape. Company shares shot up during Thursday’s trading session, closing up 6.66 percent to $22.73 a piece. 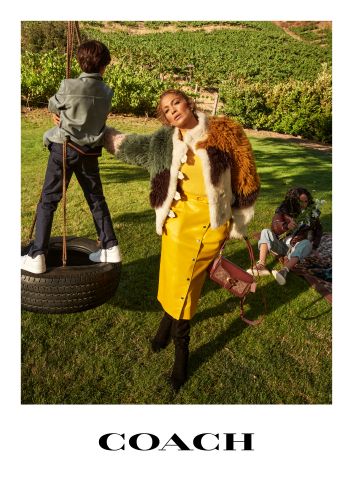 Jennifer Lopez for Coach, which is part of the Tapestry family.  Courtesy Photo

“We are very pleased with our first-quarter results, which exceeded expectations and demonstrated the bold actions we are implementing as part of our Acceleration Program,” Crevoiserat said in a statement, just days after being named the company’s permanent leader. “We drove a meaningful sequential improvement in top-line trends, supported by strength in digital and China. At the same time, we expanded gross margin by deliberately reducing promotional activity and raising [average unit retail], while also tightly controlling [selling, general and administrative] expense. Taken together, we achieved a significant increase in [earnings per share] and generated positive free cash flow.

“Our performance underscores the power of our brands, the agility of our talented teams and the competitive advantage of Tapestry’s enabling platform,” Crevoiserat continued. “Importantly, it also reinforces the potential of our Acceleration Program. Guided by an unwavering focus on the consumer and supported by new ways of working, we are positioning the company to successfully navigate the dynamic environment and drive long-term, sustainable growth.”

For the three-month period ending Sept. 26, total company revenues fell 14 percent to $1.17 billion, down from $1.35 billion a year earlier. But the company still managed to log $231 million in profits for the quarter, up from $20 million the same time last year.

The retailer’s better-than-anticipated quarter also marks the start of Crevoiserat’s tenure as the permanent ceo of the fashion group — and as one of the still few female ceos to smash the glass ceiling by leading a Fortune 500 company.

“It is a milestone and sometimes I have my head down and don’t think about it. But, I also have daughters who have been really excited to see their mom reach this milestone,” Crevoiserat told WWD over the phone. “And as I think about it, it’s been a journey for me. I’ve spent my entire career in retailing and I find this industry so rewarding. It moves fast; it’s quite competitive. I love the competition and the spirit of competition.

“And I look back across my career and think about all of the great development opportunities that I’ve had in this business and the relationships that I’ve developed and the mentoring that I’ve received,” Crevoiserat continued. “And as I think about that, that is definitely what I try to reflect and embed in the way I work and the way we work as a company, with a real focus on development of talent and mentoring.”

During the quarter, the company’s reduced selling, general and administrative expenses to $628 million, down from $863 million the same time last year. Tapestry also had a $92 million tax benefit for the quarter under the Cares Act and benefited from reduced promotional activity.

Bright spots for the group included the e-commerce and China businesses. Digital sales grew triple digits year-over-year, with Tapestry attracting nearly 800,000 new customers across all three brands in North America by way of its e-commerce sites. In addition, revenues in Mainland China rose double digits during the quarter.

“We’re already seeing a lot of success in the digital channel in terms of growing sales through the channel,” Crevoiserat said on Thursday morning’s conference call with analysts. “But we’re also having a lot of success through the digital channel in engaging our consumers through our marketing activities, even with our store associates engaging our consumers on social media platforms with virtual shopping parties, and really developing communities behind our brands. And so, the digital space is quite a bit different today than it was even a few years ago. The consumer shopping behaviors are changing rapidly.”

Coach, Tapestry’s largest brand, was the number one ranked handbag on Tmall during the quarter, selling a variety of bags, including the Coach x Jean-Michel Basquiat collection, where bags retail for as much as $795 a piece.

“It just shows when [products are] emotional, it really trumps price and anything else. And that was emotional,” Todd Kahn, interim ceo and Coach brand president, as well as chief administrative officer, said during the conference call.

“One of the beautiful things, and why I think our results are so strong, relative to companies that have more ready-to-wear, is because we are in the accessories business,” Kahn later told WWD over the phone. “And we don’t have some of the same issues on inventory and sizing that you see.”

Tapestry had $27 million in pretax charges, which included reorganization and severance fees. The company expects between $185 million and $200 million in fees as a result of the Acceleration Program.

The retailer ended the quarter with $1.5 billion in cash and equivalents and $1.5 billion in long-term debt. Tapestry is not providing guidance, but does expect both top- and bottom-line growth in 2021.

Tapestry ended the quarter with 1,494 brick-and-mortar locations around the globe, or 957 Coach, 424 Kate Spade and 113 Stuart Weitzman stores.

The extensive store fleet has been a source of anxiety among some investors amid an increasingly digital backdrop.

“What’s more, a potential traffic rebound has become more opaque as COVID-19 cases rise in the U.S. [and] Europe and colder weather sets in, thus creating little reason to materially change our out-year estimates,” Camilo Lyon, an analyst at BTIG, wrote in a note. “We see any beat as merely relative, as store traffic likely remained pressured during the quarter and as consumers continue shifting spend disproportionately to athletic [and] comfort categories, to the detriment of accessible fashion players. As such, we maintain our ‘neutral’ rating for now.”

Crevoiserat, however, said stores continue to be an important part of Tapestry’s playbook.

“The role of the store is changing and has been changing over time,” she said. “As consumers become digitally engaged with our brands, the omnichannel capabilities that we have in our stores become more important. But having said that…we’re raising the bar on our productivity and profitability threshold for our store fleet. And we’re making intentional decisions around openings and closures based on those new thresholds.

“We are confident in the strong foundation we’re building and our ability to create long-term value for our stakeholders,” Crevoiserat said. “As we enter the holiday season, our teams continue to focus on the factors within our control. Given the strength of the first quarter, we are increasingly optimistic in our ability to drive sustainable top and bottom line growth over our planning horizon.”

Shares of Tapestry are down more than 13 percent year-over-year.