Shares of Tapestry tanked after disappointing quarterly results. But the ceo said the future is bright — and in China.

Tapestry Inc. has already been caught up in a Chinese whirlwind — now it’s feeling some Wall Street whiplash.

Shares of the handbag maker fell 22.2 percent Thursday after fiscal fourth-quarter profits dropped and the outlook for the year ahead was for only flat earnings per share. The biggest change in the firm’s forecast is the expectation that growth at its Kate Spade brand will be more modest.

But with the North American backdrop described as “volatile” and the Chinese consumer still acting as growth engine, Tapestry, and its chief executive officer Victor Luis, need China.

“We’re long-term believers,” Luis told WWD. “And there’s no country in the world over the next five to 10 years that offers a greater opportunity than China.”

Luis said the company’s issues in China — both the trade war and the loss of Wen — were not cause for alarm.

Investors seem more skeptical, especially given the weakness at Kate Spade, which saw comparable-store sales fall 6 percent for the quarter.

Omar Saad, an analyst at Evercore ISI, pointed out that Kate Spade’s recent miss in sales will likely delay Tapestry’s return to earnings growth by another year.

Saad said Tapestry “is still learning how to be a multibrand fashion and luxury platform, managing and executing across multiple brands. While there have clearly been some wins…the execution challenges have also been more numerous than expected.

“Both the magnitude and achievability of the ‘platform benefits’ to [Tapestry] of operating multiple brands under one roof are likely to be viewed through a more skeptical lens by investors,” Saad said.

But he added, “We do not think investors should overlook the fact that the flagship Coach brand seems to have unlocked the code for consistent performance. The positive 2 percent comp in Q4 (amidst a clearly challenging backdrop) represents the seventh consecutive quarter of positive [low-single-digit] comps for the brand, and was delivered amidst a backdrop of tough [North American] traffic trends and tepid category growth.”

For the most-recent quarter, Tapestry’s net sales increased to $1.51 billion, up from $1.48 billion a year earlier. But income for the quarter was just $149 million, down from $212 million the prior year.

But Luis has his eyes on the horizon.

The ceo pointed out that all three brands gained traction in China over the last year, representing a high-teen percentage of Tapestry’s overall sales. That’s thanks to things like local influencers, Coach’s first runway show in Shanghai in December and the introduction of its latest digital initiative “China Next,” all of which are meant to increase brand awareness abroad.

“I think that’s the new normal for us, and really for all brands looking to market globally,” Luis said. “The key for us is to truly focus on the long-term opportunity in those markets that have growing middle classes. Because we know that that’s a key part of growth for the accessible luxury space. [And] we know that that’s another key source of growth, to grow in urban populations.”

He added that China’s population — about 1.3 billion people — continues to grow as people from rural areas move into city centers. And, Luis said, the country’s infrastructure supports the continued growth of retail in both the physical and digital spaces.

“There’s just tremendous opportunity there,” he said. “Our focus is truly on Asia.”

Still, the last week has shown just how vulnerable brands can be when they’re swept up in international intrigue. Coach landed in hot water after images of T-shirts from May 2018 surfaced, identifying Hong Kong and Taiwan as their own separate nations, rather than part of mainland China. The images enraged many Chinese nationals, many of whom took to social media to call for a boycott of the brand.

Givenchy and Versace both had separate, similar issues, of their own. 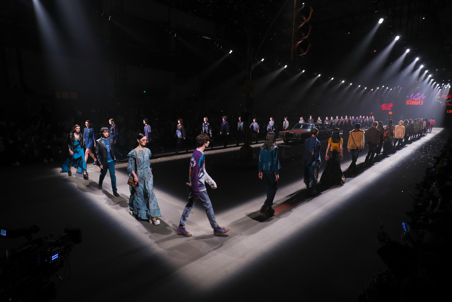 The Coach runway show in Shanghai.

“We, in no way, intended to hurt the beliefs of any of our Chinese friends or customers,” Joshua Schulman, chief executive officer and president of Coach, told WWD. “Shortly thereafter, we did hear from Liu Wen that she prefers not to work with us at this time. And we respect her decision.”

Luis added that all three of Tapestry’s brands continue to invest in the Chinese market, by way of hiring local talent, investing in local marketing and events and opening new stores.

“We’ve seen nothing of the government [of China] not wanting Coach, or not wanting international retailers, there,” he said.

And as busy as China’s been for Tapestry, it also has plenty to do at home.

At Kate Spade, Luis said growth lies in adding more “newness” to its product selection. He pointed out that Nicola Glass, Kate Spade’s current creative director, has not been with the company for that long. That means her designs have been in stores for less than a year.

“It’s basically been one season,” Luis said. “The single largest opportunity is for us to ramp up the amount of distinctive newness in our omni-channel.”

He added that there’s momentum in cross-body bags and backpacks with the current hands-free bag trend. In addition, both Coach and Kate Spade will be introducing new, larger footwear assortments early next year.

Tapestry has also revised its go-forward strategy for the coming year. Previously, the company had plans to open between 40 and 50 new Kate Spade and Stuart Weitzman stores in 2020. The new estimate is between 30 and 40, primarily in Asia.

“We’re just being more selective,” Luis said. He added that Tapestry has “put a pause” on adding to its portfolio through acquisitions. Instead, the company is “focusing on investments in our organic business and secondly returning capital to shareholders, where we are increasing the amount that we return to shareholders to approximately $700 million through dividends and stock buyback.”