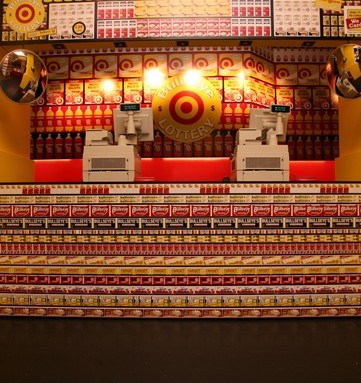 NEW YORK — When the going gets tough at Target, the Minneapolis-based retailer pulls out all the quirky stops.

“The economic environment is challenging for consumers and retailers at large,” said a Target spokesman during a preview of the 101 West 57th Street bodega. “We want to highlight our commitment to quality and design and low prices. We understand that our guests are under pressure. This gives us a platform to deliver our value message in a way that’s new and unique.”

The other bodegas will be located at 813 Broadway in Union Square, 489 Broome Street in SoHo and 325 Bowery in the East Village.

On Tuesday afternoon, a steady stream of curious pedestrians knocked on the door of the 57th Street bodega. “They want to know when a Target store is coming [to Manhattan],” the spokesman said. “We’re opening our first store in New York in Spanish Harlem in 2009.”

It’s no coincidence the Bullseye Bodegas are designed to look like hip, retro versions of the small grocery stores usually found in Hispanic neighborhoods.

Walls and columns of the 57th Street bodega are covered with graphic illustrations of consumables — which are not for sale in the bodegas — such as rolls of Bullseye toilet paper and paper towels stacked neatly near laundry detergent, soap, “Fantastic!” glass cleaner and, on the wall behind the cash wrap, Bullseye mouthwash, nail polish remover and shaving cream. A sign for Target Lotto features Target 5, Quick Target and Bullseye Miracle games.

The images of different designers can be found on soup cans with red, white and black labels that are used to decorate shelves and displays.

“There’s going to be a lot of excitement around the Harlem store,” the Target spokesman said. “The energy and vibrancy of New York are natural synergies between Target and [the city].”

The primary audience for Target’s pop-up shops is trendsetters and the media, the spokesman said. The temporary spaces are also used to generate buzz “and drive that urgency” to shop before time runs out. In this case, the bodegas, which will be open from 10 a.m. to 10 p.m. daily, will close on Sept. 15.

The Bullseye Bodegas’ theme is built around the fact that Target this fall will showcase 22 design partnerships. Three of those — the Anya Hindmarch handbag collection, Sigerson Morrison footwear and Jonathan Saunders Go International fashion — will be on display and for sale at the temporary shops before they hit the rest of the retailer’s stores.

Target’s launch of the bodegas on the closing day of fashion week is meant to tweak the exclusivity of the runways at Bryant Park. “Fashion week is an insider’s event,” the spokesman said. “We’re opening the Bullseye Bodegas for everyone to enjoy. The average price is $25.”

The retailer is touting three new beauty lines: Soap & Glory by Marcia Kilgore, Napoleon Perdis’ NP Set and Petra Strand’s Pixi by Petra. The brands were displayed on a square table along with mainstay collections such as Sonia Kashuk and JM Jemma Kidd, and Dean Harris’ accessories. Kilgore’s products have retro packaging and names such as Sexy Motherpucker lip gloss, because “Lip Size Found Crucial for Sexual Attraction!” the package says. There’s also Scrub Your Nose in It, which minimizes large pores.

“There’s an emotional connection between our guests and cosmetics,” the spokesman said. “We created a special testing environment with big graphics for the three new brands with short bios” of the brand founders. The new cosmetics environment could also be applied to older brands.

The 4,500-square-foot bodega on 57th Street has a raised area at the back of the space devoted to apparel. Makeshift dressing rooms have been created from packages of Target toilet paper and paper towels stacked high.

Converse One Star jeans and quilted vests for men and women are displayed in a wooden case designed to look like a refrigerator. “Frosty & Cool” proclaims the sign above the display. “In January, we’re introducing shoes for toddlers,” the spokesman said.

Nearby, a long rack containing Jonathan Saunders’ collection for Go International, features a black dress with white panel, $29.99; a black jacket with a Mod shape and lined with a black-and-white graphic print, $59.99; a long black sweater with collar, $44.99, and a short black jacket with leather trim, $59.99. There’s also a selection of Mossimo as well as Mossimo Supply Co. for kids.

Sigerson Morrison’s shoes are priced from $34.99 to $39.99 and include black heels with silver detail, black peep-toe heels with gold grommets, and black booties with a gold band and buckle around the ankle. The Anya Hindmarch bags include a large beige tote with gold metallic trim, gold handles and magnet closures, $49.99, and a small handbag with flap and long strap, $29.99.

“Go started with a three-month run per designer,” the spokesman said. “Now it’s down to 45 days. The private label Go International concept is new, next, now. It’s to maintain a sense of newness. It’s an entire collection.”