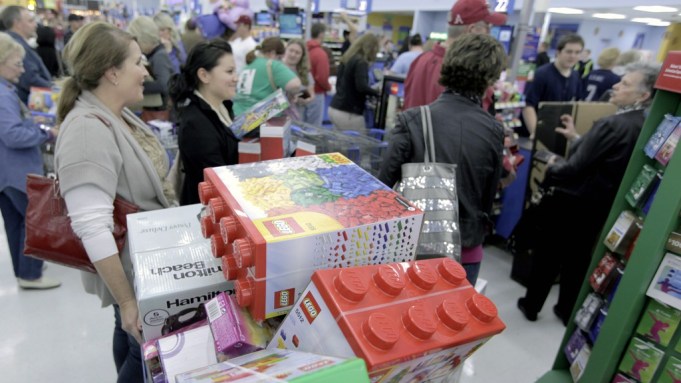 Since Wal-Mart, Target, The Gap and numerous other retailers announced last week that they’d be open for business on Thursday, the idea of shopping on Thanksgiving has become increasingly polarized.

Nordstrom is in the purist camp, taking a stand against rushing the holidays. A photo of a store sign was posted on Nordstrom’s Facebook page stating the retailer will be closed on Thursday. It received 26,241 “likes.” “We won’t be decking our halls until Friday, Nov. 23. Why? We just like the idea of celebrating one holiday at a time. Our stores will be closed on Thursday for Thanksgiving festivities. On Friday, our doors will open to ring in the new season with style.”

“This is not really something we promote,” said a Nordstrom Inc. spokesman. “We put some simple signage up in our store windows to wish customers Happy Thanksgiving, let them know we’ll be closed for the holiday and help explain that we’re in the process of getting our windows and holiday trim ready to reveal on the Friday after. Lately, we’ve seen lots of customers choosing to share this year’s or past years’ signage on social media, and we certainly appreciate this feedback.”

P.C. Richard & Son, a family-owned appliance store with 66 stores and showrooms in New York, New Jersey, Pennsylvania and Connecticut, took out newspaper ads with the headline, “Save Thanksgiving.” “Our 2,968 employees wish you a very healthy, happy Thanksgiving.…It is our opinion that retailers who choose to open on Thanksgiving day or night show no respect to their employees and families and are in total disrespect of family values in the United States of America.”

Retail employees have also been vocal this year. Casey St. Clair, a Target Corp. worker from Corona, Calif., delivered a petition with 350,000 signatures to Target chief executive officer Gregg Steinhafel. “There’s no change in [Target’s] stand at this point,” said a spokeswoman for Change.org, the online petition platform used by St. Clair. “I haven’t heard if Casey has a next step for this campaign or if she’s going to leave it for next year.”

“As our competitors continue to look at different times of operation, so are we,” said Tina Schiel, executive vice president of Target stores. “It’s a competitive business and we want to win. Only one-third of Target’s employees are scheduled to work on Thanksgiving and we continue to hear from stores that there were more volunteers than shifts to fill.”

Wal-Mart Stores Inc. workers have been using the issue of Thanksgiving store hours to press other longtime grievances, such as wages. From a rally on Tuesday at the Pico Rivera, Calif., Wal-Mart, Martha Sellers, an associate, said, “We have safety issues, we’re so short-staffed. I’m a full-time employee, but sometimes they cut my schedule to 23 hours.”

“Now, Wal-Mart is taking notice because it’s gotten wind [of the protests] on Black Friday and they’re worried about their bottom line,” said Sellers, a member of Making Change at Walmart. “Our goal is to have 1,000 store actions nationwide. Every action will look different, from civil disobedience to picketing.”

Sellers is worried about getting fired for participating, as are her coworkers. “In my store, a very small percentage is involved with the campaign. About 20 will be involved in our strike on Black Friday.”

Wal-Mart on Friday filed an unfair labor practice charge against the United Food and Commercial Workers International Union, asking the National Labor Relations Board to stop recent demonstrations and in-store “flash mobs” that the retailer called “unlawful attempts to disrupt its business.” The retail giant is asking the NLRB to initiate an investigation against the UFCW and its affiliates, including Our Wal-Mart, and to seek an injunction in federal court to stop the activity, according to the two-page charge.

The Office of the General Counsel of the NLRB on Tuesday said in a statement it doesn’t expect a decision before Thursday. The NLRB said the case is complex due to questions about what constitutes picketing and whether the activity was aimed at gaining recognition for the union.