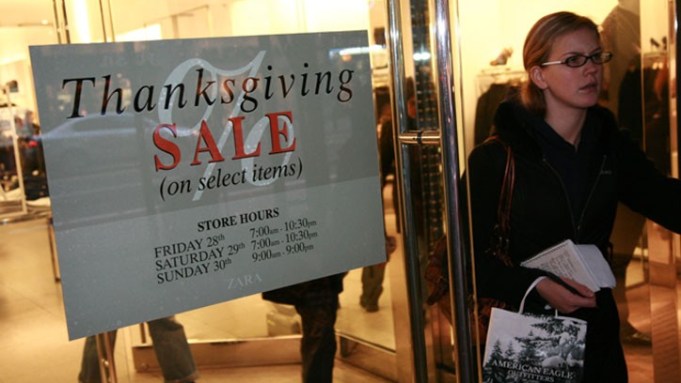 Give them what they want — and hope for the best.

As the holiday shopping season kicks into overdrive, low price is the retail mantra during what is described as the worst U.S. economic crisis since the Great Depression.

“Retailers realize that low prices will get consumers into stores this holiday season, and this could be the most heavily promotional Black Friday in history,” said Tracy Mullin, president and chief executive officer of the National Retail Federation. “Shoppers who held off buying a DVD player or winter coat over the last few months will find that prices may literally be too good to pass up.”

The consensus among economic experts is that this season will be miserable. Most Americans said they will spend less, and an even larger majority said they plan to cut spending overall in 2009, according to a survey of 2,175 adults with household incomes of more than $35,000 commissioned by The Boston Consulting Group and conducted by Harris Interactive.

Shoppers said they will hunt for high-quality bargains or trade down to less expensive brands, the study found.

Not surprisingly, retailers whose sales have suffered in recent quarters and find themselves with excess inventory are wielding the sharpest pencils when taking markdowns. As for margins, who knows?

At Saks Fifth Avenue’s Manhattan flagship about 10 a.m. Tuesday, shoppers were lined up 10 deep waiting for the 50th Street entrance to open. “Hurry up. They are pouring in,” one sales associate called out to another as eager shoppers raced up the escalator. An employee complained to a co-worker that she had been restocking inventory since 7 a.m. Several shoppers on the designer sportswear floor shook their heads in disbelief after looking at the sale price tags.

Pete Nordstrom, executive vice president and president of merchandising at Nordstrom Inc., said sales of tissue-weight cashmere sweaters, reduced to $89 from $118, have been brisk.

“If you’d look at that item, you’d say business is fantastic,” he said. “We’re selling Ugg boots better than we’ve ever sold them. It proves that if you have the right item and a hot category, there’s a market for it. Jewelry and main floor accessories are relatively strong, as is cosmetics. Outerwear is really good. Everything is selling, but everything is selling less.”

Nordstrom said value and unique merchandise is driving the business. The Seattle-based retailer is historically not promotional. Yet the fever pitch of activity has forced Nordstrom to react to its competitors.

“We’re doing the same things we’ve always done, but it’s getting ramped up because of all the pressure,” Nordstrom said. “We’ve lowered markups on over 800 items in the store by about 22 percent. The vendor community has been a pretty willing partner in making sure we’re selling through. It’s not a gimmick sale. Neiman Marcus, Saks Fifth Avenue and Bloomingdale’s have created some competitive head-to-head issues for us. The amount of competitive markdowns we’re taking is really unprecedented. We’re taking a lot more than we did last year.”

Wal-Mart Stores Inc., whose stores will be open from 5 a.m. to 11 p.m. on Friday, is taking a leadership position on apparel pricing.

“Given the economic pressures our customers face, we’re working as hard as we can to help families celebrate a Christmas without compromise,” a spokeswoman said. “We believe we are well positioned for the current economy.”

“Our Black Friday specials align with what we know shoppers are looking for this season: electronics, toys and other popular gift ideas,” the spokeswoman continued. “Wal-Mart stores will match the price of any local competitor’s print ad for an identical product.”

Target Corp. will kick off its annual 2-Day Sale when it opens on Friday with extended hours, 6 a.m. to 11 p.m. Specially priced items will include a fake fur, sherpa-lined hoodie for $19.99; boyfriend pants, $14.99, and long and lean tank tops, $5.99. The chain’s 2-Day Sale circular will be part of Thursday’s newspapers and an online version will be available early Wednesday morning, featuring several in-store offers not shown in the printed circular.

Customers waiting in line before the opening on Friday will receive a store map, new this year, that highlights select items from the circular so they can plan their shopping route while in the store.

Brooks Brothers broke price early this year. Traditionally, the retailer has held tight on promotions until after Christmas.

“Given the retail climate, it’s going to be more promotional than in the past, but it’s not a fire sale,” said Lou Amendola, chief merchandising officer. The company is “very selectively” discounting much of the women’s apparel, which is seasonal, along with some men’s wear. Outerwear is 25 percent off. “We won’t promote blue or white dress shirts, for example. We have no reason to liquidate basics.”

The company is expecting good results at its outlet stores. “With the psychology affecting consumers, they’re going to feel less guilty going to outlets,” Amendola said, adding, “in Washington, D.C., business was phenomenal last week. Our business is good in California and the Midwest. But New York City, Long Island and central-to-northern New Jersey is extremely difficult.”

October and November were challenging for Mario’s, a Portland, Ore.-based specialty store. “There was distinctly less traffic,” said owner Mario Bisio. “At the department stores, sales have been superaggressive. Our promotional cycle is earlier than last year, but it’s not more aggressive.”

Mario’s tried a new “buy-one-get-a-second-one-at-50-percent-off sale” two weeks ago. “It created a nice energy in the store,” Bisio said. “The news media is saying that America is on sale. There’s a consumer expectation that it’s a buyer’s market.”

At Bloomingdale’s, Michael Gould, chairman and ceo, said, “We still have a lot of people going through our stores. Tourism is off a little.…Business is difficult. No one will tell you that business is not difficult. The promotionality of the high-end stores is not helpful.”

Burt Tansky, chairman and ceo of Neiman Marcus Group, said the luxury retailer was still tweaking its promotions for the weekend and declined to discuss them. “The highly promotional environment has caused us to be more promotional than our long-term strategy would normally call for,” he said.

“It’s hard for us to tell if customers are buying for themselves or others,” Tansky said. “Statement jewelry seems to be popular — big, glittery necklaces, earrings, rings and cuffs. Berry tones and anything with lace is also popular.”

At least one retailer was taking a different stance.

“We don’t do anything different for Black Friday,” said Glen Senk, ceo of Urban Outfitters Inc. “We kind of ignore it. It’s not a promotional day for us. We do a fair amount of business, but we just don’t participate [in the special offers]. It’s going to be a challenging fourth quarter. I’m certainly seeing a lot more promotional activity than I’ve traditionally seen. Personally, I find some of that a turnoff. It seems desperate.”

Kmart will be open on Thanksgiving Day again this year, a tradition it started about 15 years ago. “It relieves a little pressure on our customers on Black Friday,” said Tom Aiello, divisional vice president for Sears Holdings Corp.

The company’s Sears and Kmart stores will open at 6 a.m. on Black Friday. Doorbusters will continue until 11 a.m. and include 75 percent off on Covington women’s peacoats, priced from $160 to $39.99, 60 percent off NordicTrack outerwear and 40 to 57 percent off Jaclyn Smith 100 percent cashmere sweaters. Hard goods such as Craftsman tools and Kenmore washers and dryers are being promoted to lure shoppers into the store. Sears and Kmart are offering layaway options to customers.

“Every year we plan to offer several of our most desired items and price them to offer tremendous savings on the day after Thanksgiving,” said R. Neal Black, president.

The dour economic situation prompted Men’s Wearhouse to ditch its biannual promotional cadence — post-Christmas and post-Father’s Day. To boost traffic, the chain instituted a buy-one-get-one-free suit promotion on select designer suit brands — Kenneth Cole, Joseph Abboud and Michael Kors among them — in November that will run through the remainder of the year. The promotion is also being conducted on the company’s Web site.

Woodbury Common Premium Outlets in Central Valley, N.Y., one of the pioneers of the Midnight Madness shopping promotion, isn’t even waiting for the witching hour this year. Some stores are opening as early as 9 p.m. on Thursday, including Banana Republic, A|X Armani Exchange, the Gap and Miss Sixty.

Others, including Brooks Brothers, Kate Spade, Lucky Brand Jeans, Polo Ralph Lauren, Thomas Pink and Zegna are opening at midnight. The center is expecting hoards of people to arrive this weekend and has already posted alerts on the New York State Thruway cautioning residents and shoppers to expect delays at the mall exit.