The fastest-growing magazines in the second half of 2005 ranked by circulation.

By Cecily Hall and Emily Kaiser on February 23, 2006
View Slideshow 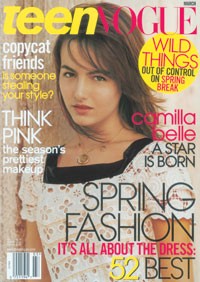 The fastest-growing magazines in the second half of 2005 ranked by circulation.

Martha Stewart, you’ve got company. The Audit Bureau of Circulations recently released its circulation report for the second half of 2005 and as of December, half of the 10 biggest gainers in circulation (with a minimum of 200,000 total paid rate base) cater — so to speak — to all of those health- and home-conscious readers out there. Ironically, number five-ranked Body+Soul was purchased in 2004 by Martha Stewart Living Omnimedia and then completely redesigned last spring — advertising and circulation numbers have been strong ever since. Other criteria to make the top 10: Magazines were required to have published at least three issues in the period (July through December), association magazines were eliminated and single-copy sales were required.

1. TEEN VOGUE
Total paid circulation count as of Dec. 31: 1,293,227
Percent change from the same period a year prior: 116
Teen Vogue is sitting pretty at the top of the gainers, largely because it acquired the assets of YM magazine in 2004 — including all of YM’s subscribers. At the end of last year, Teen Vogue’s vice president and publisher, Gina Sanders, told WWD: “Teen Vogue created a new model for the teen category — upscale, aspirational editorial. The readers came, and the advertisers responded.” Many of the brands that advertise in Teen Vogue, including Burberry, Coach, David Yurman and Neiman Marcus, don’t run in other teen books.

2. THE WEEK
Circulation: 366,758
Percent change: 58.3
Dennis Publishing’s lively newsweekly features the best of news, opinion and ideas from the U.S. and abroad. The magazine claims, “Fifty percent of the edit focuses on reporting on the news. Arts, leisure and business get the other 50 percent. Things overlap, of course.” Since its launch, The Week has lowered its subscription rates, a possible reason for the circulation increase. Word of mouth might be another instigator: Gossip columnist Liz Smith gushed in Departures magazine last June: “I couldn’t live without The Week. It’s the media’s own little secret publication: so clever, so comprehensive.”

This story first appeared in the February 23, 2006 issue of WWD. Subscribe Today.

3. EATING WELL, THE MAGAZINE OF FOOD & HEALTH
Circulation: 236,795
Percent change: 49.2
Eating Well magazine describes itself as “a tool designed to guide people passionate about eating more healthfully and joyfully in times when nutrition guidelines are ever-changing and when food is at the center of society-wide controversy and health concerns.” With an annual subscription price of $19.97, Eating Well is produced by The Eating Well Media Group, which also produces nutrition-related books, e-mail newsletters and a Web site full of recipes and nutrition stories.

4. BEST LIFE
Circulation: 333,720
Percent change: 45.1
Best Life magazine, a publication under Rodale Inc., stays true to its slogan, “What Matters to Men”: The magazine hit record circulation for the second half of last year by offering coverage on a range of subjects — from women to career help to style tips. Rodale, known for its authority on health and wellness, this month announced plans to launch sister magazines, like Men’s Health and Prevention, in more global markets such as India and South Korea.

5. BODY+SOUL
Circulation: 291,681
Percent change: 32.2
Martha Stewart’s newest acquisition, Body + Soul, saw an impressive circulation gain and, as a result, sailed right into the top 10. WWD reported last spring the relaunch of the magazine after its transition to Martha Stewart Living Omnimedia the previous year. This “whole living” magazine focuses on more than just wellness, with tips on everything from how to decorate for a sleep-inducing bedroom to the hottest yoga accessories on the market today.

6. BLENDER
Circulation: 693,230
Percent change: 29.6
Under Dennis Publishing, Blender brings the latest news and reviews of movies, games, books and, most of all, music. The March issue, with the “Band-to-Be” Black Eyed Peas on the cover, features schedules of the artists currently on tour, such as The Rolling Stones; reviews of new releases such as “Basic Instinct 2,” and a listing of the “50 Most Awesomely Dead Rock Stars.”

7. DWELL
Circulation: 269,710
Percent change: 25.5
Published since 2000, Dwell’s contents speak to the modern, minimalist, sophisticated homes and home decorators of the world. Published monthly, Dwell profiles the creative minds behind home decorating, along with other regular sections, such as “Houses We Love,” “Landscape Architecture 101” and “In the Modern World.” In its premiere issue, Karrie Jacobs, original founding editor in chief of Dwell, stated: “While a lot of magazines show homes as pure space, so isolated from the particulars of geography or daily life that they might as well be constructed on a Hollywood sound stage, we think that the connections to society, place and human experience — call it context — are exactly what make good architecture great.”

8. NATURAL HEALTH
Circulation: 379,926
Percent change: 24.8
Keeping with the health and wellness trend dominating the second half of last year, Natural Health magazine comes in at number nine. A publication under American Media’s Weider Publications, Natural Health focuses on the organic side of wellness, through coverage on holistic fitness and anti-inflammatory diets. Weider Publications also publishes such other titles as Men’s Fitness, Shape and Fit Pregnancy.

9. EASY HOME COOKING
Circulation: 336,496
Percent change: 24.7
Published bimonthly, Easy Home Cooking magazine is a guide for motivated cooks who are interested in preparing simple dishes at home. The magazine features baking secrets, menu ideas, shopping tips, a Q&A section and how-to features, and includes photos of prepared dishes — a helpful tool for those in need of a little more guidance.

10. SOAPS IN DEPTH-ABC
Circulation: 268,065
Percent change: 23.9
Can’t get enough of Erika Kane (aka Susan Lucci) each day on “All My Children”? It’s time to subscribe to ABC’s Soaps in Depth. CBS has its version, too, but ABC is reeling in readers. Makes sense, as the network’s “All My Children,” “General Hospital,” “One Life to Live” and “Port Charles” are some of daytime’s hottest shows. Not to mention some of today’s hottest celebrities, such as Josh Duhamel, Sarah Michelle Gellar and Kelly Ripa, got their big breaks through roles on “All My Children.”