Fashion’s young guns are starting to look like a bankable generation.

By Miles Socha and Samantha Conti on April 15, 2013
View Slideshow 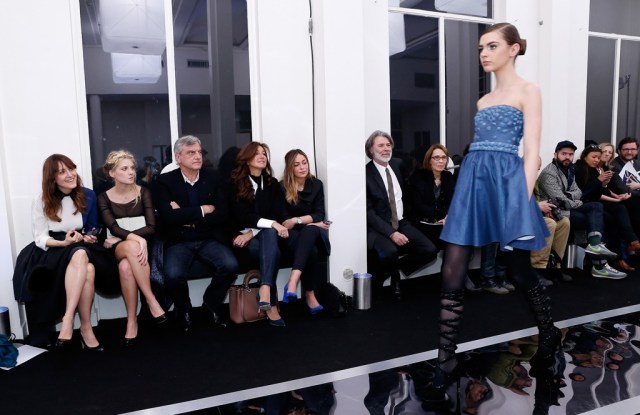 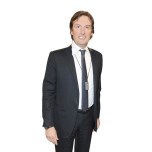 When luxury titan François-Henri Pinault took his seat in the front row of Christopher Kane’s London show last February, accompanied by his famous wife, the actress Salma Hayek, it signaled a new industry trend: Fashion’s young guns are starting to look like a bankable generation.

While the majority investment in Kane by Pinault’s PPR (now known as Kering) happened in January, the deals and signals of interest kept coming as the international collections unfurled.

In Milan, Fendi chief executive officer Pietro Beccari was among guests in the front row at Marco de Vincenzo, signaling what appears to be ongoing support of the young Italian designer, who also moonlights at Fendi.

In Paris, Dior honcho Sidney Toledano was among those who attended the show of Maxime Simoëns, the beneficiary of financial backing courtesy of LVMH Moët Hennessy Louis Vuitton chairman Bernard Arnault, and business coaching by Toledano. WWD subsequently broke the news that LVMH has also been eyeing a stake in hot British shoe designer Nicolas Kirkwood.

Also in Paris, former Coty Inc. chief executive officer Bernd Beetz was spotted at Damir Doma, revealing he has made an investment in the budding Croatian-born designer, who is tipped to be the next guest designer at the Pitti W showcase in Florence in June.

According to investment bankers and other experts, the flurry of developments could point to a new wave of designer fashion brands, though they cautioned that success is far from assured, and that the motives of investors vary.

“There is indeed a trend for investing in small designer brands,” says Ariel Ohana, managing partner at Ohana & Co., a boutique mergers and acquisitions firm in Paris. “In some cases, people are indeed banking on a new designer. In others, they are, in a long-term move, assembling a stable of promising designers for their more mature brands.”

On the other side of the table, designers with young businesses seem open to white knights who can help them face a competitive landscape dominated by powerful global brands.

“They usually, and obviously, prefer to retain a majority position,” Ohana notes, “but when they find they have the right partner, someone who can help them make the sensible business decisions, then they are usually open to giving away a big piece of the company.”

According to Pierre Mallevays, managing partner of Savigny Partners, a London-based boutique investment bank specializing in luxury goods, the explosive success of the contemporary designer category—a slice of the business occupied by such brands as Acne, Alexander Wang and Isabel Marant—has awakened luxury groups to the potential of what he called “a virtuous business model.”

“These companies are nicely profitable from early on. This makes it possible for the big groups to get involved even at an early stage without having to micromanage them.”

Investment experts agreed that designer businesses are typically too small for private equity.

“But fortunately there will always be a few rich, private investors who are interested in fashion and the creative process and who will come forward to back young talent,” Mallevays says. “There is a high mortality rate for such brands as with any other early-stage business. But with the right amount of capital, vision and ability to execute, some of these will create businesses worth in the hundreds of millions in under 10 years.”

As for big groups, he argues that an investment is “only worth it if the goal is to build these brands into large and successful businesses. This means that the big groups will do relatively few such investments and really focus on them.”

For Floriane de Saint Pierre, who runs an executive search and consulting firm in Paris, the scale of the investment is telling: A majority signals an intention to grow a business to critical mass; a minority stake suggests a wish to secure design talent for future placement at other brands.

According to sources, LVMH also has another project brewing around fashion patronage, though not investment, under executive Mark Alizart, formerly adviser to French culture minister Frédéric Mitterrand. Details of the project could be unveiled later this year.

Concetta Lanciaux, a strategic luxury adviser and a former adviser to Arnault, says valuations for young designer brands should be based largely on revenues, actual growth and potential growth rather than operating profits, “because these designers are in a start-up phase. A valuation between two and three times the turnover, based on a double-digit growth, seems appropriate.”

“Emerging markets clients are particularly sensitive to the fashion edge of luxury and to status from iconic designs that they can recognize and that can no longer simply be derived from a logo,” she says, also pointing to recent signals that Chinese customers are looking beyond the megabrands that arrived early and are hungry for new names and talents.

In Lanciaux’s estimation, the cyclical fashion industry finds itself at another linchpin moment favorable to the development of designer luxury brands, the last peak being in the Eighties when names such as Giorgio Armani, Prada and Versace established themselves.

In the newest group, Lanciaux lists Wang for his sporty chic, Doma for his slouchy, neo-corporate look, Kane and Proenza Schouler for their modern versions of Valentino, and Joseph Altuzzara for his showy, neo-Versace style.

“These designers are luxury designers, more apt to extend into accessories and other categories,”
she adds.

But there are plenty of cautionary notes when it comes to investing in young talent.

Ohana points out that, “We also see transactions in the opposite direction.” Examples in recent years include Labelux, which sold its holdings in fine jewelry brand Solange and fashion line Derek Lam back to the founders, and Valentino Fashion Group, which sold its 45 percent stake in Proenza Schouler to a group of 20 investors led by industry veteran Andrew Rosen and financier John Howard.

“Most [luxury] groups would tell you that they will more easily make more money by opening a new store in Shanghai for an established brand, for instance, than by investing in a new designer,” Ohana says, adding that examples of young designers transformed into megabrands are rare, with Marc Jacobs being perhaps the best example.

Lanciaux asserts that financiers today better understand the fashion world and how to avoid the mistakes of earlier acquisitions. Chief among them are changing all the existing staff and thus losing intangible know-how, hiring a new designer with little affinity to the brand, engaging ceo’s with experience mismatched to the brand and opening stores before clearly defining the DNA and codes of the brand, she says.

William Susman, founder of Threadstone Partners, a boutique advisory and research firm for the retail, consumer and personal care sectors, says brands need to cross a certain threshold in size to have validity.

“And then I think the question becomes: Can it ultimately become of a larger scale? And therefore it just needs the resources behind it,” he says. “One of the brands that we help is Naeem Khan, a U.S. designer who often dresses Michelle Obama. That’s an example of a brand that can attract external capital, a brand that could become something larger. But the brand has to have established itself to a degree. It can’t really be a start-up.”

Mallevays agrees that, “backing a star designer who wants to do his-her own brand at a luxury price point is a very long and financially very uncertain business proposition.”

He calls it “telling” that neither Phoebe Philo nor Hedi Slimane found backers to launch a namesake line in their careers after Chloé and Dior Homme. (Today, they are the creative directors of Céline and Yves Saint Laurent, respectively.)

“The key point to understand here is that to build a global fashion brand, talent is crucial, but not enough,” adds Ohana. “You need access to retail, marketing and organizational skills. So there are high risks in investing in emerging talents, and the only piece of advice we can give is before investing, make sure that on top of a great designer, you also have a great management team.”

From the designer perspective, Christopher Kane said his pact with Kering helps him sleep better at night.
“You do tend to hit a glass ceiling. You ask yourself: ‘Where can we take the brand?’ You need the cash injection, you need the support, you need the knowledge to take the business and propel it into different categories and geographical regions. This business is fun, but it’s really hard-core,” he says. “You really need to have support—the right lawyers, the right mentors, people giving you advice that is concrete.”

A few blips are attracting some attention on the M&A and IPO radar. —Evan Clark

• Tory Burch is focused on building her lifestyle empire now that she’s settled a legal dispute with her ex, Chris Burch, but would-be investors continue to salivate over an initial public offering down the road. A private stock sale late last year valued the company at about $2.5 billion, but the goal is clearly to get closer to Michael Kors’ rarified valuation (see below).

• Texas Pacific Group and Warburg Pincus bought the Neiman Marcus Group for more than $5 billion in 2005 and are seen as waiting for the right time to return NMG to the public markets and close the book on the investment. Could this be the year?

• It’s been more than a year since Michael Kors Holdings Ltd. went public, but investors remain fixated on the company’s sky-high valuation of more than $11 billion—a performance that continues to inspire luxe dreamers.

• Blackstone Group is out searching for investors for the debt-laden BCBG Max Azria Group, which makes the BCBG Max Azria and Hervé Léger collections.

• Tiffany & Co. might be in the midst of a soft patch, but the high-end jeweler, a perennial subject of takeover rumors, has caught the eye of Qatar’s sovereign wealth fund, which has massed a 12.5 percent stake in the company. Qatar has been establishing its fashion investing cred, having acquired Harrods for a reported $2.22 billion in 2010, and now is casting its eye toward Printemps.

• Ron Johnson’s reinvention of J.C. Penney Co. Inc. has been much harder than anticipated, cutting sales by nearly a quarter in its first year. With a falling stock price pushing the firm’s market cap down to just $3.13 billion, some deal-makers are wondering if, at that price, this isn’t a transformation that would benefit from some time away from the spotlight of Wall Street.

• Fifth & Pacific Cos. Inc. is out shopping its Juicy Couture and Lucky Brand businesses to focus on the quickly growing Kate Spade business. Fifth & Pacific has a market cap of $2.45 billion, but that could be just a starting point if proceeds from a sale of Lucky and Juicy were pumped back into Kate.