What does the financial crisis really mean for European fashion and luxury goods houses over the next 12 to 18 months?

By Andrew Roberts and Melissa Drier and Luisa Zargani and Alessandra Ilari on November 10, 2008
View Slideshow 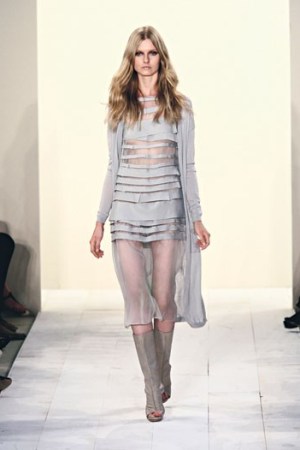 MILAN — Forget yo-yoing stock prices for a moment. What does the financial crisis really mean for European fashion and luxury goods houses over the next 12 to 18 months?

A drop in revenues almost certainly, with the sector expected to contract in 2009. More seriously, however, industry experts believe there’s a risk of bankruptcy for some firms as heavy leverage cripples their operations.

But for others, such as Giorgio Armani SpA, Dolce & Gabbana Srl and Hermès International, which are cash rich with no debt, there is significant opportunity.

“The majority of luxury groups have solid balance sheets, with cash on their books and limited debt. However, those who have to refinance significant debt…or who do not have sufficient working capital to continue operating, could be in trouble,” said a luxury goods analyst for a leading European investment bank, who requested anonymity.

Looking at the ratio of net debt to earnings before interest, taxes, depreciation and amortization — a financial measure used to determine a firm’s ability to service its debt and make interest payments — the average for listed luxury companies in Europe is less than 1, meaning they are in good health, according to Deutsche Bank.

For companies in this bracket, like Italian shoe and leatherwear firm Tod’s SpA, for example, the key issue is how hard the downturn will hit the top line.

“The concern we have is to understand what kind of consumer crisis we have in front of us and if it will touch consumers with high incomes,” Tod’s chairman and chief executive officer Diego Della Valle said.

For groups whose debt exceeds earnings — which includes some of the worst luxury performers on European stock markets — the situation is more precarious, although to what extent depends largely on the structure and terms of their financing.

Aeffe SpA chairman Massimo Ferretti said he isn’t worried about the company’s net debt, which as of June 30 stood at 50.6 million euros, or $79.9 million. EBITDA was 44 million euros, or $60.3 million in 2007. Currency conversions were made at average exchange rates for the periods to which they refer.

“[Our debt] is more than sustainable compared to our shareholders’ equity…[and] our lines of credit represent four times the current level of indebtedness,” Ferretti said.

“These are more than good conditions for a group that maintains a good bargaining power towards banks,” Ferretti said. “We are also able to finance our long-term debt through our own cash flow. This diversification leaves us more than confident.”

Prada SpA — which in 2007 had net debt of 507.5 million euros, or $703 million, and EBITDA of 318.8 million euros, or $441.6 million — was forced to deny speculation in September that it could sell a minority stake to Dubai-based investors to finance expansion, after scrapping plans for an initial public offering this year following the collapse of the stock market. Prada said it still intends to float when conditions improve.

A spokesman for the group said the credit crunch was a “worrying factor for the whole of the industry,” but underlined that Prada’s debt had limited effect on its cash flow of around 270 million euros, or $374 million, because the bulk of the company’s credit lines were structured between 2005 and 2006. More than 80 percent of the sum borrowed was long term (until summer 2010) at fixed rates.

“We are convinced that we are among those better placed,” the spokesman said, adding that for now Prada planned to push ahead with its retail expansion, which includes the opening of 20 stores before yearend. “If anything, we hope that the tight credit situation does not have a negative impact on our suppliers and wholesale clients,” he added.

However, the strain is beginning to show elsewhere.

Escada’s newly appointed ceo Bruno Sälzer said: “From a financial perspective the situation is not worse for us than others. The new shareholder structure gives us a lot of stability.”

The Herz family injected 50 million euros, or $63.7 million, into the business via a capital increase in July, becoming Escada’s largest shareholder in the process with a 30 percent stake.

“That helped a lot,” said Sälzer, who joined Escada in July, also citing the Herz family’s long-term view. “They don’t think in terms of months, but generations.”

“That’s today’s situation in a nutshell,” he said, adding it “is the most stable one we’ve had in the last 10 years. Even in this crisis.”

Sälzer, who has refilled 20 of 30 management positions since his arrival, also said Escada had received good feedback for pre-fall 2009 collections from all major markets.

Meanwhile, Italy’s IT Holding SpA is “in serious difficulty” according to an analyst at an Italian bank, who spoke on condition of anonymity.

The group reported a net loss of 9.9 million euros, or $15.1 million, in the first half of 2008, compared with net profits of 1.7 million, or $2.2 million, in the same period a year ago, prompting credit rating agencies Moody’s and Standard & Poor’s to downgrade their outlook on the stock to “negative.”

In October, IT Holding chairman and ceo Tonino Perna told Italian news daily Corriere della Sera that his company would not be able to achieve the earnings it originally forecast for the next three years and said he would trim 15 million euros, or $19.1 million, of costs to improve net margins — with the bulk of the cuts coming at loss-making knitwear brand Malo.

IT Holding, which also owns the Gianfranco Ferré and Exte brands and operates under license the Just Cavalli, Costume National C’N’C and Galliano labels, is weighed down by almost 318 million euros, or $405 million, of debt, including a 185 million euro, or $235.6 million, bond, which expires in 2012. In 2007, EBITDA reached 115.6 million euros, or $158.5 million.

What’s more, IT Holding’s parent company, PA Investments SA, is saddled with around 140 million euros, or $178.3 million, in debt.

To lighten the load and open up the Asian market, Perna, who controls nearly 61 percent of IT Holding via PA (and a further 1 percent via GTP Holding SpA, a separate holding company for PA) entered negotiations to sell a minority stake in PA to a firm represented by Hong Kong-based businessman Billy Ngok, the outcome of which is expected shortly.

“IT Holding still has value but it cannot be developed due to the amount of cash being absorbed by its debt,” Pacini said.

Intesa Sanpaolo estimates IT Holding’s net debt will exceed EBITDA by 4.7 times in 2009. The maximum multiple that banks normally lend to luxury groups is 3 to 3.5, depending on the state of the market and the borrower’s cash flow, Pacini said.

“[In this situation] you have to sell some of your assets to cure your debt or find a new partner that can balance the situation,” he said, citing Antichi Pellettieri SpA, which sold 49 percent of its bags division to private equity firm 3i in June to raise 118 million euros, or $150.3 million, in cash. Intesa Sanpaolo expects Antichi Pellettieri to be debt free this year and cash positive next year, after net debts of approximately 65 million euros, or $89.1 million, in 2007.

Pacini added that it was very unlikely IT Holding would not find an investor, Ngok or otherwise, due to the development potential of brands in its portfolio.

An IT Holding spokesman said: “The crisis involves the entire market. Being one of the major operators in the luxury goods sector and having a well-established relationship of trust with the banking system, IT Holding group has solid foundations to meet and overcome the actual situation.”

Arguably the most at risk are private equity acquisitions that have been loaded — or as it could turn out, overloaded — with debt, in some cases by 70 or 80 percent, according to experts.

Things are very tight, according to sources.

Brands under intensified pressure include Jeckerson and Aspesi in Italy, Façonnable in France, and The Cortefiel Group in Spain, according to sources — although Valentino Fashion Group SpA, which was bought by Permira last year at the top of the market for an estimated 2.6 billion euros, or $3.55 billion, is thought to be exposed.

Sources said the financial crisis had wiped off around 1 billion euros, or $1.27 billion, of Valentino Fashion Group’s value. “The deal was done at crazy prices, with an optimism that doesn’t exist today,” one source said.

A spokesman for VFG, whose stable of brands also includes Valentino and under license Marlboro Classics and M Missoni, declined to comment.

Experts said firms that had been caught out by the credit crunch shouldn’t chase top line and profit growth at the expense of consolidating foundations.

Citigroup analyst Alberto Checchinato said labels that were already stretched financially before the crisis should have taken the opportunity to restructure during the bull market rather than taking on more debt to fund expansion.

So what’s going to happen?

Those in trouble could either fall over or be restructured, while the majority of groups with more solid foundations will batten down the hatches until the picture brightens, experts said.

LVMH Moët Hennessy Louis Vuitton and Luxottica Group SpA are among firms that have said they could cut their spending, Luxottica by more than half in 2009. Tod’s is focusing on its products.

“If we look at what happened after September 11, [2001,] our company continued to grow very well, exactly because our products are considered a good investment,” Della Valle said.

Giorgio Armani said “a sifting out of the market” was “right every so often” and anticipated that “only those that have solid power, that have money behind them, that don’t have debt and that do not have to give account of their operations to the banks or the stock market” will come out on top.

He would. For groups that have big war chests and no debt — like Giorgio Armani SpA, Dolce & Gabbana Srl, and Hermès — the crisis actually represents an opportunity more than a threat, because they have the resources to invest in the down cycle. According to estimates, Hermès will end 2008 with a positive cash position of around a half billion euros, or $636.8 million.

“There are going to be winners and losers out there, and the winners will probably be those who have stronger balance sheets right now,” Checchinato said.

To wit, Missoni chief executive officer Massimo Gasparini said his company was in “a very privileged position” and the combination of no debt and good liquidity allowed for “calm” decision-making.

He said: “We are not changing our expansion plans,” which include the opening of Missoni’s biggest store, a 5,400-square-foot flagship on Rodeo Drive in Beverly Hills in the first half of 2009.

Missoni added: “It is important to keep one’s eyes open, so that one doesn’t miss the opportunities that arise in times of crisis or turbulence.”