The Search Intensifies: Aronsson About to Exit Top Job at Donna Karan

Jeffry Aronsson is said to be leaving as chief executive officer of Donna Karan International after nearly three years, to pursue other interests. 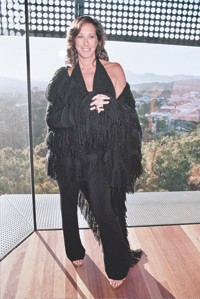 A source close to the situation said Tuesday that Jeffry Aronsson will leave as president and chief executive officer of Donna Karan International in a matter of days. An announcement of his departure is expected to come shortly from DKI parent LVMH Moët Hennessy Louis Vuitton.

The ceo’s impending departure has become one of fashion’s worst-kept secrets, as LVMH has been talking to potential successors for more than a year. It remained unclear at press time if the French conglomerate has narrowed down the list of candidates for a replacement. Karan is said to have an approval clause for a new ceo in her contract with LVMH, and has been traveling in recent weeks.

to potential successors for more than a year. It remained unclear at press time if the French conglomerate has narrowed down the list of candidates for a replacement. Karan is said to have an approval clause for a new ceo in her contract with LVMH, and has been traveling in recent weeks.

Aronsson’s departure will mark the end of another chapter at DKI. Over the years, the company has had its share of ceos who have entered and exited through the revolving doors of 550 Seventh Avenue. Since LVMH bought the brand in 2001, the French parent has brought in three ceos to turn the Donna Karan business around: Pino Brusone, Fred Wilson and, since 2003, Aronsson. Earlier presidents included John Idol, now ceo at Michael Kors, and Stephen L. Ruzow, now president of Kellwood’s Calvin Klein business.

The move is another sign that Karan’s anticipated turnaround hasn’t quite happened the way LVMH’s top brass had anticipated when it bought the company for over $643 million. Among other goals, LVMH expected to generate volume from the lucrative accessories field, where Karan has not made a significant mark beyond hosiery. Then there have been recurring rumors that LVMH was looking to sell the entire business, which is still one of the most significant in American sportswear.

“Collection had some good shows, but it never really came together from a delivery and merchandising standpoint,” said one industry source. “The handbags and the shoes never got off to a great start.”

A former corporate attorney, Aronsson joined DKI from Marc Jacobs International, where he held the ceo post. Before that, he spent nine years as ceo of Oscar de la Renta, where he became known for his disciplined approach to licensing and distribution.

Aronsson is said to be generally liked internally for his mild, laid-back attitude, which some have equated with general ineffectiveness. LVMH’s relations with the executive were said to have soured because the conglomerate wanted him to be a stronger voice for the brand and less the soft-spoken, behind-the-scenes type.

Aronsson could not be reached for comment. He is said to have no immediate plans, but has expressed interest in investing in a designer company.

“Jeffry is a nice guy,” said the source. “He has tried hard, but it’s not an easy brand. Donna has a lot of control over the fabrics, the design and the brand, which has lost its original focus a bit. One minute it’s Zen, the next it’s ‘Bright Lights, Big City.'”

That said, Aronsson set out to fix some of the problems that had been instigated by some of his predecessors, or had plagued the company, from poor deliveries to quality and fit issues and damaging third-party distribution channels. Under Aronsson, the company slimmed down significantly, closing more than 70 underproductive sales points last year, including shop-in-shops and outlet stores, which accounted for 50 percent of DKI’s third-party distribution, and thereby cutting off-price sales drastically. The diet was intended to position DKI for future growth, but sources maintained the company has struggled to assert itself in the marketplace in recent years.

The fall Donna Karan New York collection, which was widely hailed as one of Karan’s best in a while, had a minimalist edge, with luxurious double-knit coats, jersey dresses and tuxedo suits. Under Aronsson, the company expanded into the Far East with Collection. It opened a store in Seoul this year and has plans to open a unit in Beijing in fall 2007. Karan has also recently made a renewed fragrance push, and this October will launch Donna Karan Gold with a flacon designed with her long-time collaborator and friend, jewelry designer Robert Lee Morris, in 1,600 U.S. department and specialty stores, as well as in Karan’s freestanding stores nationwide. Globally, the new fragrance could do as much as $60 million to $65 million in net sales a year, according to beauty industry estimates.

Sources indicated that the Collection business is downtrending at retail, with some specialty stores decreasing the real estate devoted to it.

Meanwhile, DKNY, once considered the dominant force in bridge departments, had struggled over the years with fit and quality issues, as well as growing competition from lines such as Theory and Elie Tahari and specialty stores like Banana Republic and even J. Crew. But the brand appears to have turned around in the past two years under the stewardship of Aronsson and DKNY president Mary Wang. The company has improved both its quality and fit and the overall presentation at retail. While City DKNY, which it had launched in a license with Liz Claiborne Inc. in 2001, was terminated prematurely at the end of last year amid a more competitive and challenging better arena in department stores, DKI has put a renewed focus on its Pure DKNY label. In the last year, it opened Pure-specific shop-in-shops in select department stores worldwide for spring and added accessories, shoes, men’s wear and home.

DKNY is also expanding globally. The brand recently opened stores in Dubai, Istanbul, Shanghai, Montreal, Singapore, Seoul, Bangkok, Taipei and Kuala Lumpur. A Tokyo store is expected to open before the end of the year.

It remains to be seen how long it will take DKI to replace Aronsson. Over the past year, many names have been mentioned in connection with the DKI post. They have included Club Monaco ceo John Mehas; Valentino USA president and ceo Graziano de Boni; Matt Rubel, then ceo of Cole Haan and now ceo of Payless ShoeSource, and Mindy Grossman, formerly Nike’s global vice president of apparel, and now ceo of Barry Diller’s IAC/InterActiveCorp. LVMH could also choose to import a senior executive from its Paris base, as it did last month when it named Bertrand Stalla-Bourdillon as chairman and ceo of Marc Jacobs International.