E-commerce pioneer Federico Marchetti on the challenges of selling online in a global marketplace. 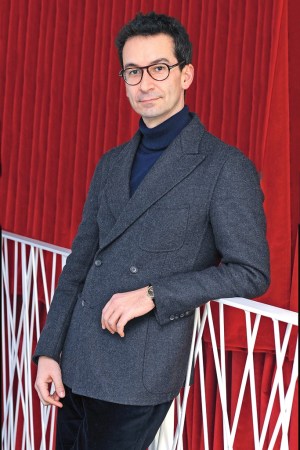 Marchetti started with a single store, the multibrand fashion site yoox.com. In early March, shoescribe.com, the Group’s most recent endeavor, went live. In between saw the launches of the fashion-forward, multibrand thecorner.com, and sites for 32 brands with which Yoox has partnered. These include Zegna, Diesel, Jil Sander, Valentino, Marni, Dolce & Gabbana, Moncler and Giorgio Armani, the last three launched in the second half of last year. The Bologna-based Yoox Group went public in 2009—Italy’s only IPO that year—and analysts now value it at $480 million.

It didn’t hurt that he identified and jumped into a nascent and apparently risky retail arena at a time when many industry giants were in no way ready to take it seriously. Though it seems incredible today, in 2000, digital retail endeavors were often viewed with something between skepticism, to use Marchetti’s word, and bemusement. His early interest has proven prescient, both for its initial vision and the time it has allowed him to expand and get things right. Now, those who didn’t take the plunge early are inclined to hurry in, making too-hasty decisions for fear of missing the already briskly sailing boat.

“Many people are panicking,” Marchetti observes. “So now, they’re rushing. And when you rush to do something, sometimes you make mistakes. ‘Everyone’s on Facebook, so let’s go to Facebook! Now we need to do the MultiTrend!’ It’s like a lot of schizophrenia, rather than a long-term, clear vision, compared to 12 years ago, when everything was skepticism. We’re moving from skepticism to schizophrenia.”

Though a meticulous planner—Marchetti insists on five-year plans for each of his stores, all revisited with regularity—he notes that technology moves at a pace not confined by the best-laid plans; to become fixated and hyper-dependent on the cutting-edge technologies du jour can turn a project passé in a heartbeat. The pace of technology, Marchetti says, is “fascinating and a little bit scary.”

He notes, for example, that “Flash basically doesn’t exist anymore because of the iPad. [Not long ago] all the companies were using Flash, because it was richer in terms of experience. So Flash—finished. Every year there is a big change.”

Not surprisingly, Marchetti deems heavy and constant investment in new technologies essential. “We need to be not on the latest train, but we need to be before the new one,” he offers, noting the recent trend toward m-commerce. (Yoox was one of the first retailers on the iPad.) Here, Yoox Group’s business model offers a tremendous advantage, and links back to the importance of its network of partnerships. “We invest in technology not only for [the multibrand stores] but for also for armani.com, dolcegabbana.com, diesel.com. So our investments are spread out for the benefit of all of our partners. None of our single partners could afford such a level of investment and technology by themselves.”

Really? Giorgio Armani, for one, comes to mind. “It’s not his core business. So the risk of wasting money, even if you have a lot of money, it’s not a very good feeling.”

Marchetti adds that Yoox Group offers a shield between fashion brands and opportunistic types looking for the fast buck. “Sometimes these multimedia agencies do a great presentation, and the brand doesn’t understand so much, and they write a big check, for Facebook, for this, for that. We’re the guardian of everything for them.”

Marchetti obviously takes the concept of “partnership” ultraseriously. “It’s different from buying and selling and making money out of the margins,” he says. “We spend a lot of time. We do the business plan together for the next five years. The Yoox management and the brand management sit down together for one or two months, not one hour just to buy the collection. We put a lot of information at their disposal, we give them a lot of know-how, and we’re not protective of this know-how. We want them to be successful.”

Apparently, his various partners agree. Yoox Group has recently renewed contracts with Valentino and Marni; while extending those with Armani and Dolce & Gabbana for five years each, “so we’re working on 10 years.”

Marchetti believes very strongly in the Yoox business model. It’s one that required careful thought when he was looking to expand the company in the mid 2000s and two possibilities presented: monobrand stores or flash sales. He chose the former because of its grounding in long-term relationships. “It’s exclusive by definition,” he says. “Only one [firm] can manage armani.com. Only one can manage dolcegabbana.com. And you better be in that position than competing with 500 other Web sites.” Conversely, the flash-sale model is short-term and highly competitive, “rather than working on a long-term plan with the brand, building a business, deciding what is the best thing to do.”

If it sounds like a lot of coordination, it is, particularly since Marchetti believes that, like politics, all retail is ultimately local. Yoox has established a localization team to facilitate immersion in the various laws, practices and customs of the countries, ultimately devising a “project plan” for each new situation. In the case of China, which Yoox entered in late 2010, there were 103 specific items to isolate, covering such essentials as shipping, customs and payment systems. Yoox’s offices are rented from the Chinese postal service, and the lease took months to negotiate. While some steps proved very difficult, some “were like bread and butter” for the localization team.

On the commercial side, a central unit manages the allocation of products for markets and pricing. “There’s a big algorithm that helps us to manage all this data in terms of pricing,” he says, estimating that, given the various currencies involved, the Group sets in the neighborhood of eight million prices per season. “Only through information technology can we do this.”

Technology also allows tracking of consumer buying patterns. Here, too, Marchetti notes significant differences, certainly when it comes to how and when people shop. For example, the U.S. leads the way in terms of iPad sales, followed by Italy. As for when, Europeans tend to buy during what Marchetti calls “office hours,” while “American and Japanese, they tend to buy in late afternoon, evening and night.”

Marchetti acknowledges that with “100 countries on the x-axis and 35 stores on the y-axis,” functioning completely locally would mean “total chaos.” Business is thus conducted in 11 languages, with Korean the most recently added, from eight strategic offices located in key points around the world.

Before the launch of Shoescribe, the breakdown of business was two-thirds multibrand and one-third monobrand, with the latter the faster-growing segment. Either way, Marchetti stresses that each store must be distinct in its point of view and true to its brand identity. He thus determined early on not to link the names of Yoox Group’s various multibrand stores. Hence, yooxshoes.com, for instance, was never considered for Shoescribe. He differentiates the three as such: Yoox, which has an end-of-season (read: discounted) to current season merch mix of about 60/40, is “extra playful, eclectic, mixing fashion with design and art, vintage with new.” Thecorner, all current season, is “pure fashion and fashion-forward, no design,” while Shoescribe is “simpler—only shoes, only women, with editorial content based mostly on movies.” He cites appropriate guest curators for the three, in order: Yoko Ono, Hedi Slimane and Arianne Phillips.

As for the decision to launch Shoescribe as opposed to a more inclusive accessories site, Marchetti finds it important in a now “overcrowded” Internet environment to keep razor-sharp focus, one “very clear and very narrow, with simplicity of message.”

Furthermore, Yoox Group’s numbers have long reflected the power of the shoe, that category’s sales trumping bag sales by a considerable margin. “We’ve sold over four million shoes in our history, one million last year,” he says. “I cannot say the same for bags.”

Still, after all of the research, the five-year plans, the vast sums invested in technology and the attention to local mores, the world of online fashion retail—like all of fashion—remains no place for sissies.