Unrest in the region has weighed on sales and if it persists, it could negatively impact Tiffany's full-year forecast.

As unrest continues, the luxury retailer lost nearly six full selling days due to unplanned store closures in its fourth largest market after the U.S., Japan and China, although it did not disclose which of its 10 Hong Kong locations were affected. The second-quarter period ended July 31 did not include Hong Kong International Airport being shut down by protesters in early August.

“Of course that had a big toll on our sales. Our sales in Hong Kong are significantly down compared to last year. It’s a double-digit decrease,” Alessandro Bogliolo, chief executive officer of Tiffany, said in an interview with WWD. “Apart from the six days, you can imagine for the rest of the quarter it’s not the best moment for shopping.”

That, alongside a strong dollar and the diminishing spending power of tourists visiting the U.S., depressed global net sales in the second quarter. They declined 3 percent to $1 billion, while comparable sales, excluding new store openings, slid 4 percent. Analysts had predicted net sales of $1.06 billion and a 1.3 percent comparable sales drop, according to Refinitiv.

At $136 million, net earnings were 6 percent lower than the prior year’s $145 million, reflecting lower operating margins and a higher effective income tax rate. Net earnings per diluted share were $1.12 versus $1.17 in the prior year. This was better than the $1.04 Wall Street had expected, though, which sent Tiffany’s stock up 3.16 percent to close at $85.17.

But a cautious tone was struck when delivering the guidance. Tiffany’s chief financial officer Mark Erceg warned in a call with analysts that if the unrest in Hong Kong persists much longer at its current rate, full-year sales and EPS may end up at the lower end of the company’s guidance range.

“If this situation were to deteriorate even further, or if the current level of unrest is maintained for the balance of the fiscal year, we may find ourselves below the bottom end of our ranges,” he added, stating that a 40 percent sales drop would wipe two full points off annual global sales growth.

For now, this is not making Tiffany rethink expansion plans in Hong Kong. “We view our investment as long-term so we are not changing our plan,” Bogliolo explained. “It is a crucial market for any luxury brand that is global.”

Those plans involve the luxury retailer relocating its “very small” store in the Hong Kong airport to a full-size duty-free unit, as well as opening a flagship at One Peking Road in September —– complete with a Tiffany Blue Box Café, one of only two permanent ones outside of New York (the other will be located in the new flagship in Shanghai).

“The New York one had a huge amount of followers and interest and is still very successful now. We are confident that these new ones in Asia will be equally successful,” he added.

Hong Kong is not the only headwind Tiffany faces in the Asia Pacific, where net sales decreased 1 percent. While sales in China rose by 25 percent, Erceg admitted that was in part because the retailer chose to “eat that last round of tariffs” and it will have to decide whether or not it will have to do something like that again.

Tiffany is one of the few fashion brands to sell U.S.-made goods in the market and has been hit with duties imposed by China on imported jewelry. (Most of the rest of the fashion industry is worried about duties on goods made in China and intended for U.S. customers.) 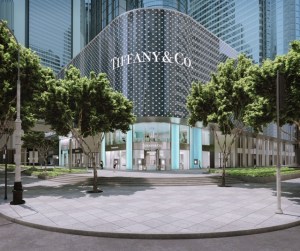 Another concern in Asia for Tiffany is the Japanese government revealing its intentions to increase its sales consumption tax rate from 8 percent to 10 percent in October, “which is adding even more unpredictability to an already challenging macroeconomic environment,” according to Erceg.

“This is because in the past, business has significantly accelerated in Japan prior to consumer sales tax increases of this magnitude, and then decelerated in the months thereafter. But whether or not the same phenomenon will occur this time around is very hard to predict,” he explained.

As for the Americas, net sales decreased 4 percent in the second quarter, with management attributing that decline to lower spending by foreign tourists and, to a lesser extent, local customers.

As well as a strong dollar, the Chinese government has warned its citizens to reconsider visiting or studying in the U.S. amid the worsening trade dispute.

“Chinese tourism has been negative in the U.S. now for basically 12 months and also in the second quarter there’s been a high double-digit decrease compared to the previous year — exactly as it was in the previous quarter,” said Bogliolo. “Unfortunately also other nationalities of tourists have been affected so sales have been decreasing in the U.S.…but this is due to the strong U.S. dollar making shopping in the U.S. less attractive.”

For now, Tiffany is focusing on launching its men’s jewelry line, the renovation of the New York flagship on Fifth Avenue and the upcoming holiday season.

“Every year we try to introduce some surprises for our customers,”  said Bogliolo of this year’s holiday campaign. “The difference will be that last year we were a little bit late in launching. This year we have made all the plans in order to be definitely on time and to start the holiday campaign as early as appropriate.”

He declined to reveal much about it other than it’s “very Tiffany with a modern and witty take.”

For the holiday period, the brand will remain at its iconic flagship on Fifth Avenue, made famous by the movie “Breakfast at Tiffany’s.” It will then move to a temporary location nearby through 2021 as its home base undergoes an expected $250 million renovation.

As for men’s jewelry, Bogliolo doesn’t ever expect it to overtake the popularity of women’s, but thinks it could be seen as unisex.