Sales from company-owned stores helped drive earnings for True Religion Apparel in the third quarter, despite stagnating sales among the brand's wholesale clients. 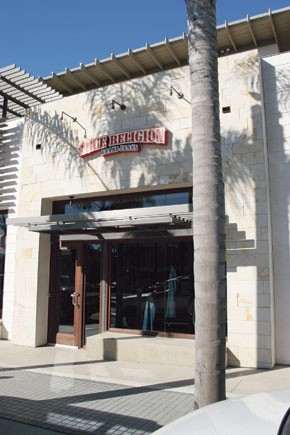 Sales from company-owned stores helped drive earnings for True Religion Apparel in the third quarter, despite stagnating sales among the brand’s wholesale clients.

“We have executed our biggest quarter in the company’s history,” Jeffrey Lubell, chairman and chief executive officer, said during a conference call with analysts.

Lubell said the company made significant inroads in diversifying its product assortment to include footwear, swimwear, accessories and knit tops. The brand is also seeing a surge in its men’s business, which Lubell said will have a long-term impact.

“We are becoming a more evenly balanced brand, with a greater proportion of our business coming from men’s,” he said. “Men typically exhibit stronger brand loyalty over time.”

Pete Collins, chief financial officer, said during the call that 58 percent of net sales came from women’s products during the quarter and 38 percent came from the men’s business.

The company’s sales gains were tied almost exclusively to its direct-to-consumer business. Sales from company-owned stores and its online business reached $7.2 million compared with $700,000 in sales last year. True Religion ended the quarter with 11 full-price stores and two outlet stores, compared with just one each a year ago.

Retail expansion promises to be a major area of growth. Michael Buckley, president, said during the call that the company is on pace to have 15 stores by the end of the year. Management has a list of 110 potential locations for full-price stores and another 20 markets for possible outlet units. As a result, Buckley said the company expects to finish 2008 with 33 stores, up from a previous target of 30.

“It is gratifying to see that the results so far are exceeding our expectations,” Buckley said of the retail operations. “We need the store environment to educate the consumer and other retailers on all of our products.”

International results continued to be hampered by the Japanese market. Sales fell to $10.9 million from $12.5 million. Excluding Japan, sales would have increased 19 percent. Buckley said True Religion plans to hire a country manager for Japan before spring to put the brand back on course.

For the nine months, earnings fell 5.6 percent to $18.4 million, or 78 cents a share, compared with earnings of $19.5 million, or 83 cents. Earnings were largely affected by higher selling, general and administrative costs.

Sales rose more than 10 percent to $120.5 million from $109.3 million, again driven primarily by the direct-to-consumer segment. Management said the company is on pace to deliver record sales for the fourth quarter.

“We fully expect the fourth quarter to be the biggest quarter in our history,” said Buckley, who noted that the wholesale businesses had regained momentum.

The company also said it would be restating financial results for 2005, 2006 and the first two quarters of 2007 after it determining that its income tax expenses had been calculated incorrectly. Earnings for 2006 and 2005 will likely be lowered by $1 million and $1.6 million, respectively.