U.K. Manufacturers Forced to Gamble on Quantities as Lockdown Eases

U.K. factories are back in business, but bosses now have to guess how much demand there will be when stores eventually reopen.

LONDON — High-end British manufacturers — including Church’s, Peregrine and John Smedley — are ready to fire up production this week as the government begins easing lockdown, but one of their biggest concerns is retail. Who’s going to buy all their merchandise, and when? Which retailers will be left standing?

With stores here shut until at least June 1, and the British government refusing to nail down the dates and details of its path out of lockdown, manufacturers are feeling a mix of relief — and angst — as they start to reopen factories.

In a speech on Sunday night, followed by an address to Parliament on Monday, Prime Minister Boris Johnson said those working in manufacturing and construction could return to their jobs this week. But he gave only vague indications of when some shops might reopen, while hair salons, pubs and restaurants won’t be able to switch on the lights until early July, in a best-case scenario.

Johnson said a series of conditions will need to be met — around testing, infection rates, and the number of new COVID-19 cases — before the lockdown can truly ease.

“A wrong move could be disastrous,” Johnson told members of Parliament on Monday, as he laid out a raft of safety measures that companies should take as they reopen in phases. He has also told Britons that the country will eventually beat “this devilish disease,” while the economy will come back to robust health. 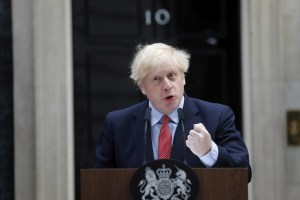 British Prime Minister Boris Johnson makes a statement on his first day back at work in Downing Street, London, after recovering from the coronavirus.  Frank Augstein/AP/Shutterstock

In the meantime, Britain’s manufacturers — who have been busy in the past weeks making factory floors safe — are now hoping that stores can reopen soon so they have an outlet for all their merchandise.

He added that while UKFT welcomed Johnson’s message that certain parts of the economy should get back to work, he warned that “with retail still closed across the globe for the foreseeable future, the outlook remains incredibly challenging.”

Ian Maclean, managing director of John Smedley, the knitwear manufacturer founded in 1784 which supplies clients including Vivienne Westwood and Paul Smith, said that it was good to hear “a clear change in tone” from Johnson about revving up the economy.

He also pointed out there would be “a chicken-and-egg situation” for manufacturers until retail reopens in earnest.

Indeed, even when stores are allowed to reopen, it is understood they’ll do so gradually, prioritizing out-of-town outlets that can be reached by car, rather than city center ones where crowds might form.

In addition, when stores reopen they won’t be able to rely on some of their key customers: International tourists. The extent of air travel over the next months remains unclear, and Johnson plans to implement a two-week quarantine on anyone arriving in the U.K. by air.

Smedley shut down its four branded retail shops on March 20, and its two factories on March 27, and put its staff on paid furlough. Shortly afterward it began planning for a safe way to reopen. In these past months, Maclean has argued that the company needs “to win the hearts and minds” of workers and customers to the cause of a safe reopening.

To that end, Smedley said it has completed “a substantial reorganization” of its working environment and put in place safety measures for its shops.

Tom Glover, whose family has owned Peregrine, the men’s clothing label and manufacturer, for eight generations, said he and his team are keen to get back to work at the Derbyshire, England, factory. Glover said his manifold challenges include getting back in sync with fabric and raw material suppliers; staggering staff shifts to allow for social distancing; allowing people to work from home, and hoping there is no second spike in COVID-19 cases, come Christmas.

A flare-up of COVID-19 cases later this year, and a potential second lockdown, “is our biggest concern right now,” said Glover in an interview. “Our clients do most of their business in the pre-Christmas season, and if there were to be a second spike I don’t know how retail would come back. Without Christmas, many of the small boutiques would struggle.”

He said he remains optimistic about the fall/winter 2020 season and is hoping to take part in the spring/summer 2021 edition of Pitti Uomo, which is now set for September.

“Hopefully, by September or October time, people will have money to spend and there will be some stability,” he said.

Anthony Romano, chief executive officer of the British footwear company Church’s, which is owned by Prada Group, is also trying to manage expectations around retail demand. Church’s business is about 70 percent retail and 30 percent wholesale, and much of its offering is based around evergreen styles.

He is planning to start opening the Church’s manufacturing locations in Northampton, England, at the end of May. Not only is he dealing with implementing new security and hygiene measures and monitoring staffing levels — as with all factories everywhere, some staff are ill and cannot work; some will have underlying health conditions; while others if they return to work, could pose a potential risk to vulnerable family members at home — he’s also having to calculate how many pairs of shoes to make.

He said he’s not in a hurry to go into full production for the fall/winter 2020 season if sales are already down this year due to the coronavirus. At the same time, he still has fall/winter orders to fulfill, and a production cycle of eight weeks. Church’s makes its highly specialized shoes in England, while the softer, lighter models, women’s shoes, and sneakers are made in Italy. Romano said he is looking to transfer more production to the U.K.

“We need to get going now, otherwise we won’t make our fall/winter 2020 delivery deadlines,” he said. At the same time, he doesn’t want to be in a position where he’s making excess stock. “It’s a delicate balance,” Romano added.

About 85 percent of the fall/winter orders are already in, and Romano said there hasn’t been a big problem so far with cancellations.

In the meantime, he’s adjusting to the new normal, creating digital catalogues and sales platforms for international wholesale clients who won’t be able to write their orders in person this summer.