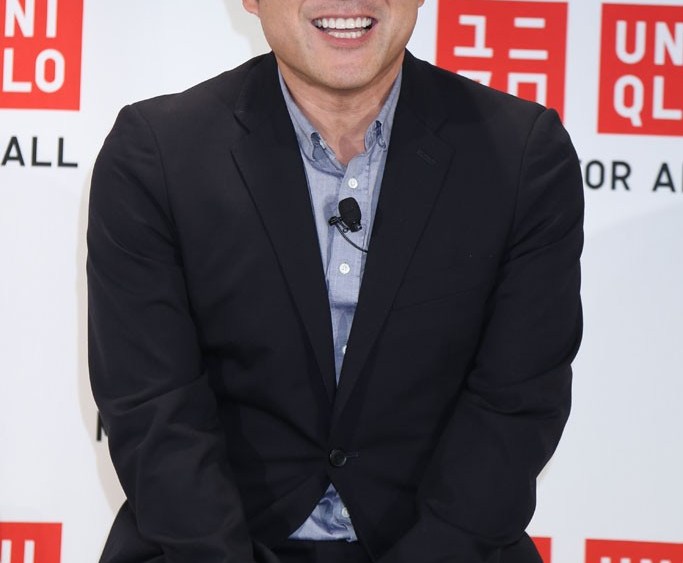 NEW YORK — On the march to become a $50 billion company by 2020, Uniqlo welcomed new brand ambassador Novak Djokovic to its Fifth Avenue flagship Wednesday to further that crusade.

As early as 5 a.m., hundreds started lining up outside the mammoth store to meet the number-two ranked men’s tennis player. But before shoppers got a glimpse of him or the performance tennis apparel he helped create, Djokovic talked tennis with the media and Uniqlo U.S. chief executive officer Shin Odake outlined how the chain plans to leap from the fourth largest apparel retailer to the first. Launching e-commerce in the U.S. this fall toward his goal of churning out $10 billion in annual U.S. sales one day will be instrumental to that global growth, Odake told WWD during an interview.

With three New York City flagships up and running, Uniqlo will open a 43,000-square-foot store in the Westfield Garden State Plaza in Paramus, N.J., on Sept. 28 followed by a San Francisco location in October. Shooting to open 10 to 20 U.S. stores in the next 18 months to two years, Odake said the company is “actively negotiating” for sites in the greater New York City and San Francisco areas. He also serves as Fast Retailing Group officer.

“In order for us to grow in the United States, we need to hire a lot of Americans and change our company to an American company from a Japanese one, so that is what we’re working on,” Odake said. “We need many, many talented people in a global marketplace. I think there is more talent in terms of the fashion business outside of Japan, especially in New York City and the U.S. Of course there are always going to be Japanese experts but this company has got to be an American company, so we need to hire top management, designers, merchandisers, marketing and press people, many different levels of American people, in order for us to be successful.”

One key hire will be a designer partner to succeed Jil Sander, whose +J collaboration ended earlier this year. Odake, who singled out the women’s business as an area that can be improved upon, would only say the company is “actively looking” for a multiyear deal “with a great designer. Maybe not so many people are like Jil Sander’s level but we love to collaborate with designers.”

While it is tough to say exactly how many people Uniqlo will hire in the U.S. in 2013, Odake said the Fifth Avenue flagship employs between 600 and 700 people in its peak season. “Of course, not all of our stores will be this size or this level of traffic, but we need to hire many, many people,” he said.

Uniqlo is also open to working with outside agencies and firms, as is the case with Andrew Rosen’s Theory, which helps with back-office services for the American arm. But that relationship goes back years, since Uniqlo owns Theory’s parent Link Theory and Rosen as a result is very familiar with the Uniqlo business, according to Odake. “He is not technically involved in the Uniqlo business, but if I want to see someone important in the fashion industry, he knows everyone. So he makes introductions. Sometimes he gives advice about merchandise. But he is very busy with Theory and he has a lot of projects going on. But it is very nice you can always go to him to seek some advice,” Odake said.

“We want to build a team together. If we want to do $10 billion some day in the U.S. and be like a Gap some day soon in the U.S., we can’t limit it [hiring] especially at the senior and corporate levels. It’s also very important to train and educate store managers. They are the ones who interact with the customer in the store,” Odake said. (To be sure, they know just what to say to shoppers — last year Uniqlo had 50 American college graduates train in Japan for three to six months.)

On Wednesday, Djokovic helped spread the word about the U.S. push. Before he worked the sales floor, the 25-year-old ace proved he could work the crowd like the pro that he is. After being asked to demonstrate how easily his warm-up jacket unzippered, he quipped, “Are you sure?” and then added after the fact, “It’s still OK. It’s still working.”

After describing how he and creative director Naoki Takizawa teamed to develop the 10-piece collection, Djokovic was asked if the increased interest in player’s attire deterred from the athleticism of the sport. “I don’t think so. It’s good for tennis players to obviously always seek improvement with their sponsors and the clothes that they wear. Obviously, new materials are coming up as we speak, so we always like to try new materials that are not only very light to wear but also absorb the sweat very fast. On the other hand, it’s in the common interest of tennis players and the brands representing them to look good on the court. To be part of the Uniqlo family and a brand that is very recognizable, successful and respected around the world and it’s still growing. We both have very common goals and high ambitions.”

Flanked by his gear from the French Open, Wimbledon, the London Olympics and the upcoming U.S. Open, Djokovic said he liked that the latter was partially inspired by the Serbian flag. But the performance piece remains key. “It’s very important from a professional tennis player’s perspective to have the most advanced and technical fabrics available in the clothes. These materials absorb the sweat very quickly so they don’t feel heavy on me,” he said.

However aggressive Djokovic is known to be on the court, he was anything but that when developing the Uniqlo line. “He was very calm, keeping his energy inside, like a philosopher. The way he was thinking was deep,” Takizawa said. “Also, he brought me to the courts to watch him practice. It was important to understand the movement of his body.”

Takizawa, who at one point in his career spent two years working with athletes on a project for Nike, was so inspired by Djokovic’s design input that he started spending more time in the gym to figure out how muscles favored by tennis players actually work. Panels in the front and back of shirts from the Djokovic line are designed to create a vent for the wearer and pile-lined pockets are designed to absorb perspiration when a player reaches for a tennis ball. In the months ahead, he plans to incorporate more of Djokovic’s post-match feedback into future collections. Having created costumes for William Forsythe’s “Eidos: Telos” for the Frankfurt Ballet, Takizawa said, “What a dancer needs for the costume, the movement is very quick and fast like a sport.”

Highlighting the company’s track record of success with selling performance pieces, Odake noted that 100 million units of Heattech were sold worldwide last year. He also cited Ultralight down, which weighs less than seven ounces, as another megahit. That said, the company is focused on what’s next. “I guess the important thing is to stay humble and learn from your everyday business. Of course, our business is not perfect and we still have a lot to learn from the consumer and from the U.S. market. The important thing is to be unique every season to improve, and we do improve,” Odake said.

As for whether the presidential election in the U.S. will have much bearing on Uniqlo’s growth plan, Odake said, “We only have three stores. We are not like a Gap that has 1,000 stores. I am not worried about the U.S. economy or a presidential election too much. It really depends on how we improve our business, how we learn from our American consumer and how we can keep offering new services or innovative products. It’s not time to worry about that. We should take a look at ourselves and try to improve. We need to try to build a business first.”