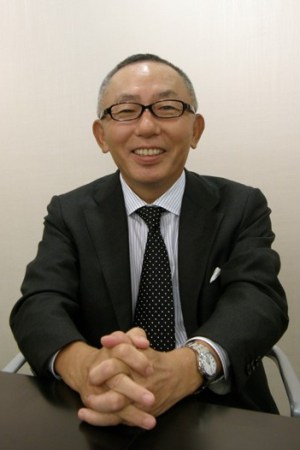 “When I was young, Brooks Brothers, Polo Ralph Lauren, [Giorgio] Armani — those brands really were changing the world,” the 60-year-old executive said in an interview at Uniqlo’s brand new showroom atop its Ginza flagship. “But after that, no one else has managed to do the same thing. We want to be a brand that really changes the world.”

To that end, Uniqlo, a brand known for innovations such as selling T-shirts in plastic tubes and creating a fabric that retains body heat, is going global. Yanai said Uniqlo plans to open 100 to 200 stores a year outside Japan. Two weeks ago, Fast Retailing outlined an audacious plan to grow its sales from the 682 billion yen, or $7 billion at average exchange, forecast for the year ended Aug. 31 to 5 trillion yen, or about $54 billion, by 2020 through a combination of international and domestic expansion as well as acquisitions.

Even though sales have more than doubled over the past six years, the company still has a long way to go to reach that target.

“We would like to become a more global company,” said Yanai, a few hours after unveiling Uniqlo’s first footwear collection, a Japan-specific lineup of ballet flats, Ugg-style boots and other styles.

Uniqlo’s most pressing international order of business is cutting the ribbon on a 23,000-square-foot flagship in Paris’ Opera District. The store will open Oct. 1 to coincide with the much-anticipated debut of Jil Sander’s +J collection for the company.

“The Paris flagship will be more significant than our SoHo store [in New York] because Paris is a fashion center,” the executive said.

Next year, Uniqlo will open a flagship in Shanghai as well as its first store in Moscow. As of June 30, Fast Retailing operated 867 stores, 777 of them in Japan.

Uniqlo is banking on the Sander collaboration, which marks the return of the German designer to the fashion world after a five-year hiatus, to “open the future” for the Japanese brand, in Yanai’s words. For now, the designer is concentrating on her new +J collection, but her deal with Uniqlo will eventually expand to other areas of the company.

“Everything. She’s involved in every single aspect. She pays such particular attention to detail, from the fabrications to the photos for the +J advertising campaign,” the ceo marveled. “She is someone who gets absorbed in her work.”

Yanai admitted that melding Sander’s perfectionist ethos with that of his own mass-producing empire isn’t always easy, but he seems to be taking any confrontations in stride.

“We have arguments, but through arguments we get to know each other. That’s important,” said Yanai, Japan’s richest man, according to Forbes magazine’s most recent ranking.

Meanwhile, Fast Retailing is eyeing the market for potential acquisitions. Yanai said the company has $4 billion to spend, but he declined to reveal the companies that have piqued his interest or how soon a transaction could take place. He also declined to comment on whether he’d consider bidding for Gap, a name that has surfaced in recent speculation.

“There are some interesting companies out there, but [the owners] may not want to sell. That is the kind of situation we’re in now,” Yanai said of the M&A landscape.

But the executive was more forthcoming when it came to a certain acquisition that didn’t come to be. In 2007, Fast Retailing bid $900 million for financially troubled department store chain Barneys New York Inc. before ultimately losing out to Dubai-based Istithmar.

“We are so happy that we could not buy Barneys,” he said with a hearty laugh. “If we owned Barneys right now, we would be building their business and we would be spending a lot of effort on that.”

Yanai also dished freely about his thoughts on Japan’s long-suffering department stores. Although Uniqlo and its affordable product offering have thrived during Japan’s recession, department stores, luxury goods companies and other retailers have struggled to convince consumers to open their wallets in the current climate. Yanai said he thinks consolidation within Japan is highly likely and the number of department store operators could contract to as few as three at some point in the future.

The executive, clad in a dark gray suit, striped shirt and spotted tie, said department stores need to do a better job of establishing a unique identity and cutting costs to remain competitive. He questions the logic of restaurants and other diversions that are often found in stores here.

“Often department stores are so stuck in their old ways,” he said. “If you want to sell clothes, do you really want to put cosmetics on the first floor?”

That said, Yanai sees a business opportunity for his own company within the arguably dated department store framework. Uniqlo already has some shop-in-shops in department stores here and plans more in the future in a bid to reach new customers. Christine Edman, Hennes & Mauritz’s country manager and representative director for Japan, has said H&M is considering doing the same.

Although a bevy of fast-fashion competitors, including H&M, Forever 21 and Topshop, have flooded the Japanese market over the past year, Yanai said Uniqlo’s high-quality garments set it apart from the rest of the trend-driven pack.

“We don’t consider fashion as our god,” he stated bluntly. “We want to be able to provide really good clothes.”