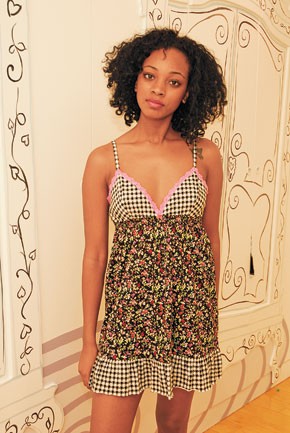 As a result, the market was splintered into two camps: retailers and vendors who stayed the course with the market week set by the Intimate Apparel Council and others who hedged their bets on a later venue in Manhattan. The first half of the month offered several additional perks for specialty merchants expanding into other categories: the hype and media blitz of New York Fashion Week, accessories and ready-to-wear fairs such as Designers & Agents and Fashion Coterie, as well as a home accessories show.

Regarding the market dilemma, Patrice Argain, chief executive officer of Lingerie Americas Inc., said his show, which has been running in New York since 2002, has had conflicts with other trade fairs before. Former competitors included the Intimate Apparel Salon, which was acquired by trade show giant Messe Frankfurt in 2002, and Intima America, also owned by Messe Frankfurt, which was discontinued in 2005.

“We’ve had challenging times in the past with Carol Bigman and her Intimate Apparel Salon, and then the Messe Frankfurt show,” Argain said. “Now we have Curve. It’s absolutely a challenging time, because it’s not easy to have two different dates between market week and late February. But we are following the wishes of our buyers.”

Jean-Luc Teinturier, president and ceo of CurveExpo Inc., said, “We are here to unite the market, not divide it. That’s one of the reasons we joined forces with Samantha Chang [Curve partnered with Lingerie Boutique by Samantha Chang for biannual fairs in Las Vegas and New York]. We wanted to be consistent with market week. It’s unfortunate that Lingerie Americas didn’t stick to the market week for the first time.”

The pace of the New York market was also impacted by the presence of two lingerie fairs in Las Vegas — CurveNV at The Venetian Resort Hotel and Lingerie Americas at WWDMAGIC — both staged during the crucial Valentine’s Day selling period when specialty retailers want to be in their stores to monitor business during one of the biggest lingerie gift-giving holidays of the year.

The volatile environment was underscored by fluctuating lingerie sales at retail that were better than expected in January, while February was generally flat with the exception of Valentine’s Day, according to retailers and manufacturers.

Carole Hochman, chairman and design director of The Carole Hochman Design Group, which exhibited collections including Betsey Johnson Intimates and Carole Hochman sleepwear at Lingerie Americas, said, “I’m really mad. These two shows should merge. Somebody should do something about this.”

Neither show producer would comment about the possibility of a merger, which has been suggested by many in the industry.

Harold Ebami, ceo of Age Group Ltd., which produces sleepwear by Kimora Lee Simmons for Baby Phat, and Flora Nikrooz, which was exhibited at CurveNY, said, “I feel these two shows are doing a disservice to the industry. They are diluting the ability to attract attention to brands at a time when business is difficult. Nobody likes to travel basically twice to do the same thing. It’s probably the same way for Vegas. I think there should be one show.”

“It’s been a real challenge for us as a company to try to figure out what’s going on. We can’t afford to be at both shows,” said Victoria Vandagriff, president of Bendon USA, which produces the licensed Elle Macpherson Intimates. “If you’re not at the shows opening up a significant number of accounts, it’s not worth the investment. I really don’t know how long we need to continue showing at a trade show.”

Bendon exhibited at the Lingerie Americas fair in Las Vegas and Curve in Manhattan.

Maria Scotto, who exhibited at Lingerie Americas, said she was pleased with the pace of business but was “very upset” over the conflict of trade fairs.

“It’s very disruptive and very expensive,” Scotto said. “A lot of people have been complaining there has not been a lot of traffic in February because of the two shows and two different dates. It’s bad enough the vendors are annoyed, but now the buyers are getting aggravated, and once that happens, it’s really bad news for everybody.”

Guido Campello, vice president of marketing and innovations at Miami-based Cosabella, said, “At the last minute, we did the Curve shows in Las Vegas and New York, and we also did the Coterie. Retailers were also coming to our showroom where they were not distracted and could see the entire breadth of the collection, including basics. We were happy with the results. A lot of people came in to see the Sex and the City collection. The Carrie group, especially a ruched, mesh floral bustier, was by far the best item.”

Addressing the tough economy, Richard Leeds, chairman of Richard Leeds International, a company that showed exclusively at its Madison Avenue showrooms, said scores of retailers were “analyzing” their plans and buys.

“There’s been a lot of reconsideration of how to do plans, how to approach the market, how to buy to fit into their assortments,” said Leeds. “Stores have their own private label programs, and they have to be responsible for their own inventory and markdowns. We as manufacturers are being challenged more than anybody else and are being pushed down by retailers for more initial markups and markdown money. It’s coming to a point where we can’t source and manufacture efficiently anymore.”

Leeds said he understood why retailers are being more conservative.

“They’re up against same-store figures and there’s tremendous pressure for initial markups,” he added. “So they will buy close to need.”