Sourcing executives spoke of managing the complexities of the supply chain in a worsening economic landscape at the third annual WWD Sourcing Forum.

By Evan Clark and Ross Tucker on March 18, 2008
View Slideshow 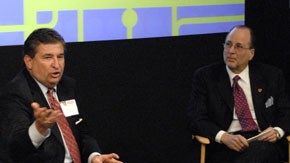 Sourcing executives spoke of managing the complexities of the supply chain in a worsening economic landscape at the third annual WWD Sourcing Forum.

Apparel manufacturers such as Kellwood Co. and Warnaco Group are facing challenges from weakening consumer demand and rising prices for energy and raw materials.

Executives from both companies believe they’ll be able to weather the storm by driving on efficiency and employing new technologies to better manage their supply chains.

Jeff Streader, president of Kellwood Global, believes one of the biggest challenges facing apparel manufacturers is that the boundaries between retail channels has eroded.

“The lines are blurring between discount, midtier and department stores,” said Streader. “Look at the price points, the items, it’s not clear anymore.”

Further complicating the situation has been the high level of consolidation in the department store channel. As a result, there are fewer customers for manufacturers to target.

But the nature of sourcing has changed. Streader described a career spent chasing the lowest cost suppliers around the world and had just returned from a two-week trip to China. This hunt may be ending.

“Today, the game has changed. The old pricing paradigm is gone,” he said. “Apparel brands and retailers are not willing to pay higher prices to offset quality and delivery.”

Kellwood has moved to make sure its sourcing system reflects these shifts. The company ships 175 million units a year, but it has reduced the number of factories to around 200 from more than 500. Suppliers are being selected based on their ability to offer more than one service, such as product development, pattern-making and technical services. Streader acknowledged that the company still has some of those development operations working domestically, but the thrust is to continue to move that development to Asia.

“We need to work with suppliers that can bring a full suite of offerings to the table in terms of development to shorten the supply chain,” he said.

“The price pressures and the increased costs that our suppliers overseas are feeling are real, but at the end of the day our demand is down,” he said.

China is facing pressure on several fronts. Energy prices have continued to soar and the cost of raw materials has risen along with them. Compounding the issue has been an increase in wages and labor shortages. But Streader believes if U.S. economic difficulties continue, reduced demand at retail will force companies to focus on improving inventory levels. As a result, excess capacity could build in China and through Asia.

“Net result in my opinion is that we’ll have stable prices in 2008,” said Streader.

Warnaco Group is still reintroducing itself to the market after a bout in bankruptcy and the face it is putting forward is neither static nor that of a manufacturer.

“Warnaco is a very different company than it was five years ago,” said Frank Tworecke, president of the company’s sportswear group.

“We no longer have any manufacturing facility,” said Tworecke, who joined Warnaco in 2004 after stints as chief operating officer at Bon-Ton Stores Inc. and Jos. A. Bank Clothiers.

Along with that shift has come a change in mentality and attitude. For Tworecke, the company’s true customers are not the retailers who buy goods from Warnaco.

“We’re vested to the end consumer,” he said. “We have a very important partnership with that consumer who walks into a retailer’s door.”

“The challenge for us at Warnaco is how fast can we develop the technology and the disciplines to help support the way our customer wants to buy from us, both domestically and internationally, and through a retail platform,” he said.

For the retailer turned vendor, it is a matter of working smarter, not necessarily cheaper.

“Being a low-cost supplier…it isn’t chasing those nickels and dimes,” said Tworecke. “It’s not that it’s not important — trust me, it’s important — but I don’t know whether you’re really making a long-term investment that will be sustainable if you keep chasing geographies and factories.”

Technology, he said, has a longer-term impact on how one can position a company as a low-cost supplier. Warnaco has also slashed the number of vendors it works with by more than half, now focusing on less than 150 relationships with suppliers. More cuts in the manufacturing base are expected.

Tworecke said the company wants the relationships it does have to last beyond the next season.

“Sourcing relationships for us today are more complete,” he said. “We need to be able to garner benefits based on being true partners.”

“A lot of factories that we do business with would like to have Calvin in their stable of names,” said Tworecke.

To maintain that brand with customers, the company has to put more oomph into the product now than in years past.

“We are required by our customers to provide fashion,” he said. “Not crazy fashion, but fashion that brings the customers product that has more value than a basic five-pocket jean. We are not a commodity business. The days of being a standard five-pocket jean with the Calvin Klein name on it, that’s not where the market is anymore.”

As an example of how certain traits can become ingrained in a system, Gershenhorn gave a history of how the distance between rail tracks came about, tracing it back to Europeans who built wagons and eventually to the width of the two horses used to pull a Roman chariot.

“Studies have shown that the supply chain can directly impact over 75 percent of a business’ operating results,” said Gershenhorn.

The Internet and emergence of fast-fashion operations has also narrowed the window of opportunity for a new product to make an impact on the market.

“Like never before, these market dynamics shout for supply chain innovation and a sharper-than-ever focus on education,” he said.

Gershenhorn said executives should examine two criteria when deciding when the time is right to make changes in their supply chains. First, determine whether the supply chain is providing a competitive advantage.

“If it isn’t, how might innovation play a role in boosting performance?” posited Gershenhorn.

The second criteria was to determine what economic value would be created with a more flexible and efficient supply chain. According to Gershenhorn, inventory levels of efficient supply chains have been found to be as much as 65 percent lower than their competitors, which translates into greater financial health.