The conscious uncoupling of VF Corp. and its jeans business will result in two fundamentally new companies playing the field in fashion.

The trimmed-down VF — based in Denver and built around Vans, The North Face and Timberland — will have more than $11 billion in sales and a stronger growth profile. It will be freed up to explore big-ticket mergers and acquisitions and to double down on its growing outdoor and action sports business.

And Lee, Wrangler and the VF Outlet business will be pulled together under what has been temporarily dubbed NewCo and spun off to shareholders in the first half of next year. Based in Greensboro, N.C., that company will have $2.5 billion in sales, about $1 billion of VF’s debt load of $3.5 billion, some serious scale in the denim business and what the company described as “an attractive financial profile, including a sustainable high dividend yield.”

Steven Rendle, who is remaining at VF as chairman and chief executive officer, told WWD the tax-free transaction would “create two strong diversified companies, each with distinct capabilities” as well as “very specific investor profiles.”

While the companies will draw in different types of investors, the shareholder base was wary and traded shares of VF down 3.6 percent to $92.82 Monday. (That left the company with a market capitalization of $36.8 billion — one of the strongest overall valuations in fashion, placing it well ahead of competitor PVH Corp. at $11.8 billion, although still significantly behind Nike Inc. at $128 billion).

Scott Roe, who is staying on as chief financial officer at VF, told analysts on a conference call that while the jeans business “is still a solid, profitable and cash-efficient business, it’s no longer required to fund VF’s cash requirements.”

The strategic priorities and financial characteristics of VF and the jeans business have simply evolved over time.

“The synergies across these businesses have become less clear,” Roe said. “Therefore, management and the board of directors have concluded that each entity can achieve even greater potential as a separate company with a separate management team focused acutely on its own unique opportunities.”

For VF, Roe said, “M&A will continue to be a top priority and we will maintain our active management of the portfolio.” He said VF will have the financial flexibility after the spin-off to pursue tuck-in and potentially larger acquisitions and investments to fuel additional growth.

The newly independent jeans company, led by Scott Baxter, VF’s group president of America’s West, who has been designated to become ceo, is expected to focus on supporting a “strong and growing dividend, as well as reducing financial leverage,” according to Roe.

The spin-off still requires regulatory approval as well as the final sign-off from VF’s board, but there seem to be few serious roadblocks to the transaction as planned.

Rendle and Roe in a telephone interview said they had a fiduciary obligation to entertain any offers that might come in to buy the jeans operations.

But Roe said anyone looking to buy the business would have a “pretty high hurdle [due to a] low tax basis [for the business] and the tax costs.…It’ll take a pretty big number to make it work.”

On Friday, when word of the deal started to leak, financial and industry sources pegged the valuation of the jeans business at $3 billion on the low end. Some went as high as $4 billion and suggested that one of the big private equity firms would be the most likely to be interested.

One source familiar with the business said on Monday that even $4 billion could be low, and that the ask would be higher given the balance between the taxation issues and the return to shareholders. This source noted that the jeans business is still a “money-maker,” just not growing as fast as the rest of VF’s businesses.

Deals of that size are few and far between in fashion and usually require a much higher growth quotient than VF’s jeans business, which is expecting sales to be about flat this year.

To prepare for the split, Rendle said Robert Shearer, the respected former VF cfo, is in talks with VF to join NewCo as non-executive chairman.

And Juliana Chugg will stay on the VF board and have responsibilities on the NewCo board. Her NewCo term is open-ended, according to Rendle.

The businesses that had reported to Baxter will now report to Steve Murray, who was named vice president, strategic projects in March.

Despite the move, Rendle said VF would continue to have a strong presence in Greensboro.

The company has a research and innovation presence in the area, and recently established a textiles office at North Carolina State University.

The ceo said VF will have more than 500 associates who will remain at the company’s enterprise support center, and there will still be a “constant flow from the West [in Denver] to North Carolina.”

There are about 700 to 800 jeans associates in the Greensboro area who will remain there, although the Lee operation in Kansas City will relocate to Greensboro to the offices where Wrangler is now housed.

As for the move to Denver, Rendle said the company worked with an outside search team and determined that Denver was the best location when factoring in work environment, cost of living, availability of talent and areas that could prompt people to relocate.

The “where” seems to be set, now it’s just a matter of how the move and the spin-off will change VF and its growth trajectory. 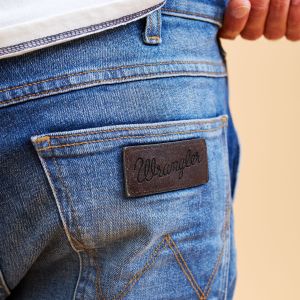