Via Spiga wants its customers to feel modern, urban and edgy in its shoes — and now they can carry that attitude around. 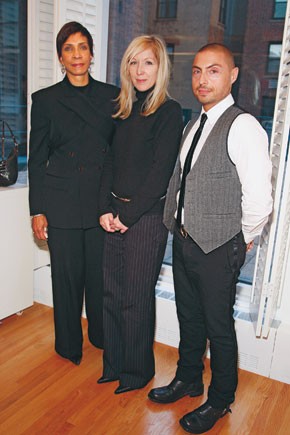 Via Spiga wants its customers to feel modern, urban and edgy in its shoes — and now they can carry that attitude around.

The footwear company, owned by the $2.4 billion St. Louis-based Brown Shoe Co. Inc., is relaunching handbags for fall. The 23-year-old New York-based brand had a handbag license with Accessory Exchange, but after a yearlong hiatus it has signed a new license with Wathne Ltd., the Manhattan-based accessories manufacturer. Brown Shoe acquired Via Spiga, the American accessories brand known for its Italian flair, in 2005 when it took over Bennett Footwear Group.

The move to expand to bags is just one of the strategies being employed by Via Spiga to grow the brand’s store network, in addition to adding product categories through licenses, such as with watches and jewelry. Via Spiga also has licensed lines of men’s shoes and eyewear.

Last year, the company closed some stores, including one on Madison Avenue, in order to redesign and elevate the brand. This year, there are plans to open four new doors in New York, Chicago, Los Angeles and San Francisco in locations better suited to its customers. There also are plans to open 150 Via Spiga boutiques across the globe within five years. The brand’s footwear is currently distributed in stores such as Bloomingdale’s, Macy’s and Nordstrom.

Via Spiga is looking at distributing in China as well, and is considering starting a line of women’s suits once its retail network is up and running.

“Some people want to fit in and others want to stand out,” said Sheri Wilson-Gray, chief marketing officer for Brown Shoe, who joined the company in June. Wilson-Gray focuses on strategic brand development and is responsible for directing marketing communication and consumer research among other areas for the Brown Shoe brands, which includes Naturalizer, Carlos by Carlos Santana, Dr. Scholl’s, Franco Sarto and Etienne Aigner.

“[The Via Spiga woman] responds to lust and needs to make a fashion statement,” she said. “She likes being the maven.”

There are two lines under the Via Spiga umbrella. Via Spiga is slightly more sophisticated, with wholesale prices from $44 for a small jacquard hobo to $168 for a large leather tote. Standout looks include a dove gray leather tote and a crocodile embossed satchel in black. V Via Spiga is sportier, with wholesale prices from $39 for an ultramarine logo-printed tote with patent leather trim to $73 for a nylon satchel with leather trim. A new, architectural Via Spiga logo will be launched on the bags, and the long, linear zipper pulls take inspiration from the brand’s stilettos.

The fall collection will ship to stores beginning July 25. The distribution is expected to mimic Via Spiga’s current one for shoes.

The bags are designed by Wathne’s vice president of design, Leonello Borghi, who hails from Giorgio Armani, where he took part in the firm’s first accessories collection in 1999. He also has an eponymous line with Wathne, which also produces O Oscar handbags.