Kellwood to Spin Off Vince Brand With IPO

The number of shares to be offered and the price range for the offering have not yet been determined. 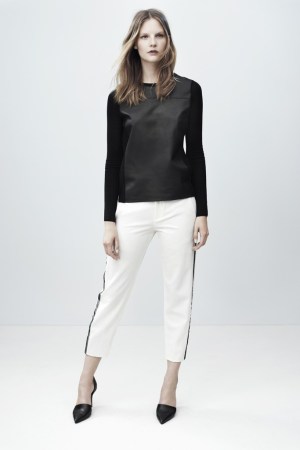 This story first appeared in the July 16, 2013 issue of WWD. Subscribe Today.

Apparel Holding Corp., to be renamed Vince Holding Corp., said Monday it has confidentially submitted a draft registration statement on Form S-1 with the Securities and Exchange Commission relating to the proposed IPO of its common stock.

The number of shares and their price range for the offering haven’t been determined. Apparel Holding Corp. is an affiliated portfolio company of Sun Capital Partners Inc. The proceeds from the IPO will be used to pay down debt and for general corporate purposes, such as opening new stores.

The Vince IPO is expected to commence after the SEC completes the review process with respect to Apparel Holding Corp.’s registration statement, subject to certain conditions. Sun officials were unavailable for comment.

There has been speculation for months that Sun might do an IPO of Vince, and Goldman Sachs and Robert W. Baird & Co. were said to be leading the offering, which could raise as much as $200 million. Sun Capital Partners hired Jill Granoff as chief executive officer of Kellwood Co. in May 2012 with the goal of accelerating the growth of Vince and maximizing its potential as a global lifestyle brand. Granoff took on the additional role of ceo of Vince last August.

The market for IPOs has been less than robust in the U.S., with just six consumer-centric offerings in the first half raising a total of $3 billion, but it appears to be perking up. Coty Inc. went public in June, selling shares at $17.50 each and raising $1 billion. Coty’s IPO eclipsed Michael Kors Holdings Ltd., which raised $944 million in its highly successful December 2011 offering. Neiman Marcus Inc. filed for its long-awaited IPO in June.

Vince, whose accounts include Saks Fifth Avenue, Neiman Marcus, Nordstrom, Barneys New York, Bergdorf Goodman, Harrods, Lane Crawford and Harvey Nichols, currently does in excess of $500 million in retail volume. The brand is known for its luxury basics for women and men. It also manufactures a denim line.

“I think it’s a highly differentiated leading women’s contemporary brand with a lot of potential to develop sub-brands,” said analyst Janet Kloppenburg of JJK Research. She said the men’s business has great opportunity and hasn’t been leveraged for growth. She also sees potential in footwear and leathers. “Globally, the brand is highly sought after for its unique contemporary, casual positioning, especially in Asia and Europe. I’m very positive on the name.”

Laurence C. Leeds Jr., chairman of Buckingham Capital Management, added, “It’s a very successful company out of Kellwood, and they perform very well in the stores. They’re a successful, young and vibrant American company that’s been a leader in the arena of casual fashion. I imagine they’ll do quite well.”

Vince, which was founded in 2002 by Rea Laccone and Christopher LaPolice, was sold to Kellwood in 2006 for an undisclosed sum. Kellwood was acquired by Sun Capital Partners in 2008. LaPolice, who ran sales and marketing, and Laccone, responsible for design, merchandising and production, left the company in February. In anticipation of their planned departure, Granoff assumed the additional responsibility of ceo of Vince, overseeing strategic growth and direction. In January, Vince named Doo-Ri Chung as creative director. Her first collection was introduced to retailers for holiday 2013 selling.

During the past year Granoff made several key hires at Vince to strengthen its management ranks. Karin Gregersen, former managing director of Chloé/Richemont North America, joined as president of Vince in May. Beth Cohn was named senior vice president of retail, and Jill Steinberg was tapped as senior vice president, wholesale, with responsibility for the women’s and men’s business. Lisa Klinger was appointed chief financial officer for Kellwood and Vince. Klinger had recent experience with a retail IPO, having previously been executive vice president and cfo of The Fresh Market Inc., where she earned high marks for her handling of the firm’s 2010 stock market listing.

Granoff, too, has experience both in running and serving in top positions at public companies. Prior to joining Kellwood, she was ceo of Kenneth Cole Productions Inc., and before that was executive vice president of direct brands at Liz Claiborne Inc. Previously, she was president and chief operating officer of Victoria’s Secret Beauty, a division of Limited Brands Inc., and earlier held various executive positions at the Estée Lauder Cos. Inc.

Vince, which has 22 freestanding stores, has been eager to accelerate that growth. The brand, which will open a new store in Greenwich, Conn., next week, has plans to open a flagship in New York’s SoHo neighborhood in August. The company is redesigning its Web site, which will be completed in 2014. Vince doubled its Internet business last year and has opened six shops-in-shop in South Korea and one in Harvey Nichols in the U.K. It also has plans to open in-store shops in Holt Renfrew and The Bay in Canada.

Licensing is another area of opportunity for the brand. The company has two licensing agreements in place so far. Last month, it signed a deal with Tawil Associates to produce and market Vince children’s wear, beginning with fall 2014 selling. It also has a footwear deal with Brown Shoe Co. Fall 2013 marks the first full year at retail for the footwear collection.

In a related move, Kellwood said Monday it has named Lynn Shanahan, 52, as chief executive officer of Kellwood Brands. Shanahan will be responsible for the overall management of Kellwood’s diverse portfolio of fashion brands, including Rebecca Taylor, David Meister, XOXO, My Michelle, Sag Harbor and Briggs, as well as private label businesses and new strategic partnerships. She will report to Granoff, 51, who as ceo of both Kellwood and Vince, will continue to provide strategic oversight to Kellwood, lead the Vince brand and manage select functional areas of Kellwood, such as legal and human resources.

Shanahan, who has over 30 years of fashion and retail experience, most recently founded the C2 Group LLC, a company that partners with leading fashion and lifestyle companies to provide operating management, brand development and overall growth strategies. Through C2 Group, she was president of Marimekko NA, where she was responsible for spearheading the company’s North American expansion strategy, including retail, wholesale and e-commerce platforms and the opening of New York and Beverly Hills flagships. Earlier, Shanahan was group president for Tommy Hilfiger, where she was responsible for U.S. wholesale, e-commerce, licensing and marketing. She is credited with building Hilfiger’s global licensing and distribution program to more than $1 billion in sales. She spent 15 years at Hilfiger.

The search was conducted by Russell Reynolds Associates.

“Having Lynn as my partner frees me up to lead the Vince brand and accelerate its growth,” said Granoff. Granoff noted that Kellwood would be looking to expand through acquisitions and licensing arrangements. “We see a lot of opportunity in the contemporary and junior space to leverage our core capabilities,” said Granoff. Kellwood sold off or closed six brands over the past 12 to 18 months — Adam, Zobha, Baby Phat, Phat Farm, Lamb & Flag and part of BLK DNM — and has no plans to sell off any more of the brands. Going forward, Granoff said Kellwood is more interested in acquiring well-known, established brands that have scale and high growth and profit potential. She said Kellwood is shifting its strategy away from incubating new brands.

Market sources indicated that once Vince is spun off in an IPO, Shanahan would be elevated to CEO of Kellwood.

Shanahan told WWD that she was looking forward to “exploiting the potential of the core businesses,” which include Rebecca Taylor, XOXO, David Meister, Sag Harbor and Briggs, as well as private label for retailers, and using her experience to continue to build Kellwood’s brand and business growth platforms.

Discussing Kellwood’s current business, Granoff said, “Our business is doing well despite challenging economic conditions. We are seeing sales growth and profit improvement in virtually all of our business segments.”

Shanahan, who began Monday, said there were “great team members” in place and she was eager to get acquainted with all the people and the businesses. She will be based at the New York offices at 1441 Broadway.