The timing seems fortuitous for Adrienne Vittadini, which is relaunching segmented bridge and better collections for fall. 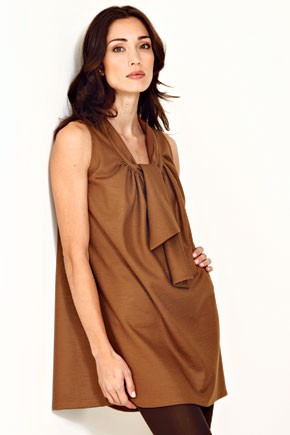 NEW YORK — The timing seems fortuitous for Adrienne Vittadini, which is relaunching segmented bridge and better collections for fall.

With former bridge giant Dana Buchman going down-market to Kohl’s after this spring, and with retailers reconfiguring their floors, the newest incarnation of the Vittadini bridge sportswear label doubled the volume in orders expected, according to Michael Warner, president of Republic Clothing Group, which holds the Vittadini sportswear licenses.

“The bridge real estate is wide open right now,” said Adrienne Vittadini president Mary Gleason. “Retailers can be confident about putting Adrienne Vittadini in that space because it’s a recognizable name. The challenge is to decide how updated you go for bridge.”

For fall alone, Warner expects the bridge line, which wholesales from about $49 to $299, to generate between $8 million and $10 million at wholesale in about 175 doors, including Bloomingdale’s and Neiman Marcus. For the longer term, Warner projects the line will do up to $50 million.

Knits make up about two thirds of the collection, and jackets are another important component.

The Adrienne Vittadini better line wholesales for $29 to $179. Warner projects it will do $30 million in wholesale volume in its first season, during which it will be carried in 400 doors, including Lord & Taylor, Dillard’s and Macy’s. The better customer is also more career-clothes and outfit focused, while the bridge line has more casual chic looks and separates.

“For both markets, the end user has the same psyche of ‘forever 30s,’ but the bridge customer is more expectant of luxury,” Warner said.

Adrienne Vittadini will spend $1.5 million this fall on advertising, including an eight-page spread in September’s Vogue. The company plans to shoot the exact pieces that stores order in a photo shoot