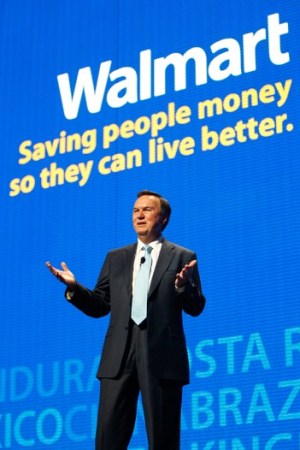 ROGERS, Ark. — Wal-Mart Stores Inc. has lots of plans for the future when it comes to international expansion, but it made one thing absolutely clear at its annual meeting here: apparel isn’t a focus.

“Apparel is a small part of our business,” vice chairman Eduardo Castro-Wright said in a Q&A session with the media following the annual meeting Friday. “Sixty percent of our business is in grocery.

“While apparel makes a lot of the headlines, it isn’t our [most] important business. Apparel is a work in progress,” he said, repeating a phrase he’s used several times in recent months. “I can summarize it by saying that we are going back to basics in many ways. Basics, as in business basics and basics, literally, in terms of the product itself. We do extremely well when we sell everyday needs for our customers, anything from socks and underwear to jeans and T-shirts. That’s where we excel and that’s where our value proposition can differentiate us from other retailers.”

Apparel is important only “because it completes the trip,” Castro-Wright continued. “If you’re buying groceries and consumables and can pick up [soft goods], that’s the model we’re using to enrich the [product] mix and the overall basket.”

But while Wal-Mart has dabbled in fashion before to less-than-stellar effect, Castro-Wright left no doubt about the retailer’s intentions. “We’re not a department store,” he said. “If our customers picked up a nice Wrangler jean, that would be absolutely adequate for them. You have to be true to yourself and stick to who you are.”

Overall, the U.S. market almost seemed an afterthought at the meeting, like the asterisk at the end of the retailer’s newly redesigned logo.

Jamie Foxx hosted the event, which had the high production values of a network awards show, and was themed “One World.” Singers and dancers represented various countries, including India with Bollywood-style costumes; Africa, with acrobats incongruously doing kung fu moves, while Thai dancers spun plates on sticks and men wearing basketball jerseys and riding unicycles stood for the U.S.

Doug McMillon, president and chief executive officer of Wal-Mart International, was the first executive on the stage, underscoring the emphasis on business outside the U.S. When Mike Duke, president and ceo of Wal-Mart Stores Inc., finally addressed the gathering, it was 9:49, more than three-quarters of the way into the annual meeting. His number-one strategy for the future? “To become a truly global company.”

“Our international business is strong and only becoming an even bigger and more important part of our company,” he said. “More than 60 percent of our new square footage built last year was for Wal-Mart International.”

Duke revealed that the international division this year hit the $100 billion sales mark, accounting for one-quarter of the retail giant’s annual sales.

Duke said Wal-Mart will build smaller stores and more of them, offering “many more points of distribution. In just the next five years, we’ll create 500,000 jobs around the world.”

He is setting his sights on the world’s exploding population, especially in developing countries. “Think about helping not 200 million consumers a week, but what about helping 1 billion customers a week?” Duke said.

The retailer still has opportunities in the U.S., even though it is looking to international for a faster rate of growth. “We will accelerate the number of stores and square footage in Mexico, Brazil and China,” Duke said. “In the U.S., there’s lots of opportunities for growth with new stores such as our new store in North Bergen, N.J. There are places like that in the U.S.”

Hinting at the roadblocks Wal-Mart has encountered in the U.S. in penetrating urban centers in California as well as Manhattan, particularly from workers’ unions, Castro-Wright added, “We want to penetrate markets we’ve had difficulty penetrating in the past. It requires the will and an adequate political climate. We would love to enter some of the urban areas where customers have to pay more than in other parts of the U.S.”

Asked whether urban customers would expect more from apparel than basics, Castro-Wright said he defined urban as the broad swath of shoppers with median household incomes in the Wal-Mart range of $35,000 to $45,000 annually.

And while Wal-Mart has been stymied by apparel in the U.S., the retailer is taking its wins where it can get them. Asda’s great success with George in the U.K. is being exported to other international markets. “We’re going to be doing more of it around the world,” said a spokeswoman. “Canada especially. We’re going to put more of the brand in stores.”

Despite the fact Wal-Mart has tweaked George for American audiences in the past, the spokesman said, “We see great potential for George in the U.S. and elsewhere.”

If the annual meeting seemed subdued compared to previous years — yes, there was the all-star musical lineup with Mariah Carey and Mary J. Blige performing — it may have been because there was little good news to report. “Traffic is down,” admitted Castro-Wright. “Trip frequency dropped.”

Asked whether comparable-store sales have moved into positive territory, he reiterated Wal-Mart’s policy of not divulging comps until the quarterly earnings reports. The company’s guidance for the second quarter is between negative 2 percent and 1 percent, he said.

“It’s directly related to gas prices, unemployment and what I would call self-inflicted pain, things that don’t have to do with the macroeconomic environment but things related to the way we executed our assortment strategy, where we missed some opportunities,” he said.