Wal-Mart Stores Inc. is retailing's Goliath, but this holiday season the company is scrapping like a flyweight for every dollar. 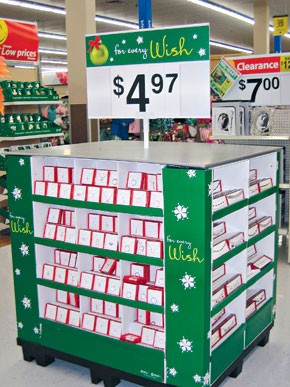 Wal-Mart Stores Inc. is retailing’s Goliath, but this holiday season the company is scrapping like a flyweight for every dollar.

Inventory is lean, fashion has been curtailed in markets that don’t respond to it, and given more support in markets that do. The company has strengthened regional assortments, and the overarching message is Christmas — writ large.

Wal-Mart knows it all comes down to price, and on that score, the $345 billion retailer is formidable.

On walmart.com, for example, shoppers can purchase a $10 organic cotton-cashmere blend sweater and have it shipped for 97 cents. In stores nationwide, Wal-Mart is delivering on a goal to offer at least 10 different apparel items in each department, priced at $10 or less.

It’s those kinds of deals (as well as GPS and MP3 players for less than $100) that pushed the company past Wall Street’s expectations in November. Comparable-store sales rose 1.4 percent for the month, a notch above the consensus estimate of a 1.2 percent gain.

And, significantly, Wal-Mart executives reported that apparel — a category that’s been so weak it has wilted comps for much of the year — has improved.

“Wal-Mart appears to have sucked the oxygen out of the value-retail space,” wrote William Blair retail analyst Mark Miller in a Dec. 6 research note that noted Wal-Mart’s competitive impact on other discounters. Miller selected Wal-Mart as a top stock pick for 2008.

Citigroup analyst Deborah Weinswig chose Wal-Mart to outperform its peers this holiday. Asked how her prediction is standing up, Weinswig said: “I feel even better about it….I’ve toured tons of Wal-Marts with the company recently and I’ve come to the conclusion that they’ve become much more adept at localized merchandising. They’ve been talking about it for years, but they finally have the technology to do it.”

She’s seen, for example, Christmas decor departments that are contemporary in feel in the Northeast and appropriately jingle-belled in the South.

In one of Wal-Mart’s premium stores in Valley Ranch, Texas, outside Dallas, the retailer offered fully-lit artificial Christmas trees for more than $100. However, at a store in Danvers, Mass., which serves many working-class Brazilian immigrants, tree-decor systems were priced at less than $10.

It appears Wal-Mart has corrected some of the operational problems that plagued it last year when it undertook an aggressive remodeling campaign that disrupted hundreds of stores and lasted into the holiday season.

The Christmas Shops in the Home and Garden areas were well-stocked with decor, outdoor lighting and gift wrap, and were reasonably neat during spot checks of stores across the country in recent weeks. Signs at the entry announce “This Way to the Christmas Shop,” there are carols on the public address systems as well as gift card displays throughout the stores.

Wal-Mart associates in a store in Baldwin Hills, Calif., near Los Angeles, worked folding and re-hanging clothing to keep the apparel department tidy, a sign that this particular department is productive and that the retailer is investing labor to keep it that way.

Weinswig said next year Wal-Mart plans to roll out markdown- and size-optimization systems for apparel. The former will allow it to discount clothing with better granularity — mark down the colors that aren’t moving, for instance, while keep the popular ones full price.

Size optimization will allow Wal-Mart to ship a customized assortment of garments to a particular store based on the attributes of the local population rather than sending the same slate of small, medium and large garments to every store. (Competitor Target Corp. has been using size-optimization and markdown technologies in apparel for years.)

Wal-Mart’s technical upgrades won’t boost this year’s results. But the retailer believes it has taken other steps that will pay off this holiday — a tough season marked by the economic slowdown, with high fuel costs, a credit crunch and declining consumer confidence.

“We have prepared for a more challenging, tougher macroeconomic environment and we believe we are well positioned to win,” Scott said during a Nov. 13 earnings call.

He said the quarter would yield $100 billion in sales, topping last year’s $91 billion and setting a record for the retailer.

Robert Passikoff, president of Manhattan research firm Brand Keys, said 30 percent of the 16,000 people his firm surveyed said they would spend less this holiday season, compared with 15 percent who planned to cut back last year.

“This holiday anyone who is not serving the upper end of the market knows they will need to promote the heck out of their brands to get people into the stores,” said Mandy Putnam, vice president of Columbus, Ohio-based TNS Retail Forward, summarizing research.

The firm’s data has shown “Wal-Mart shoppers, in particular, having higher gas prices smack them in the face while they are not particularly secure about their jobs,” she said.

Marivy Stager, who moved to the U.S. in 2006 from the Philippines, tried on a White Stag sweater and flare-leg jeans at the Baldwin Hills Wal-Mart this month, but said she could find cheaper garments elsewhere.

Wal-Mart hopes to eventually win over customers like Stager with its 10-10-10 program, which calls for 10 items offered in 10 colors and available at $10 or less. It’s also touting “Express for Less,” a fast-track program of licensed entertainment and sports apparel priced slightly higher and capitalizing on fads. The retailer had a blockbuster at back-to-school with “High School Musical 2” merchandise.

“We actually did some research fairly recently with core Wal-Mart shoppers and what attracts them to cross the aisles into the clothing department is that ‘2 for $10’ sign,” she said.

At the Danvers store in early December, Kay Bosworth of Rockport, Mass., came in to buy raisins, crossed the aisle and walked out with four cotton-blend T-shirts, each roughly $5.

“I noticed the nice colors first and the prices are good so I bought more,” said Bosworth, a personal trainer.

“Wal-Mart has seemed to back away a bit from edgier fashion items that I used to see here,” she said, adding that she found some George and z.b.d. skirts appealing. “I have to keep an eye on my budget and not go crazy — I still have groceries to buy.”

Janet Hoffman, head of Accenture’s retail practice, said apparel still is among the top gifts given each year, but is typically a late mover. Shoppers first snatch up must-have toys and electronics and, increasingly, gift cards. She and her team have been visiting mass market discounters since Black Friday. She’s noticed a lot of consumables in carts, cautious apparel shopping and assortments that take little risk.

“They are tapping into consumers looking for value and not doing anything on the fringes” of fashion, she said.

Weinswig characterized Wal-Mart’s assortment as safe, but not stellar.

“They still have work to do,” she said. “The colors are all wrong. But my prediction is that they’ll really get their act together in apparel in ’08.”