Retailer said Wednesday it was shuttering 338 doors, while also handing out 3,695 pink slips to full- and part-time employees in the process. 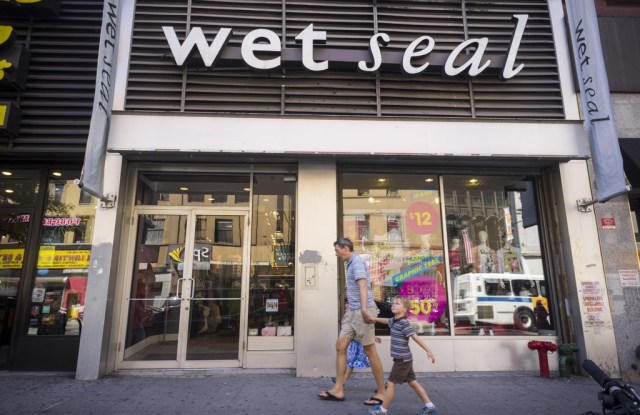 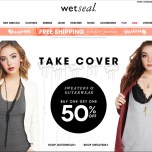 The Wet Seal Inc. is likely edging closer to a bankruptcy, while Deb Shops is joining the retail graveyard.

Wet Seal said Wednesday it was shuttering 338 doors, while also handing out 3,695 pink slips to full- and part-time employees in the process. The company reasoned that the closures were its best option “after assessing its overall financial condition and the company’s inability to successfully negotiate meaningful concessions from its landlords.” The closed stores, effective either Wednesday or today at the latest, represented 48 percent of the retailer’s net sales for the nine months ended Nov. 1. The teen chain continues to operate 173 sites, plus its Internet business.

Ed Thomas, chief executive officer of Wet Seal, said the firm’s “financial condition leaves us no other alternative than to close these stores [and] we are doing everything we can to protect the interests of all of our stakeholders, including employees.”

The company raised the possibility of bankruptcy in December when it disclosed such a filing as an option if discussions to raise “new additional capital” to address liquidity needs proved unsuccessful. On Friday, the company inked a forbearance agreement with Hudson Bay Master Fund Ltd., the holder of a $27 million senior convertible note, that holds off immediate payment of obligations under the note until Monday. Hudson’s Bay in September sent Wet Seal a notice of default and demand for redemption.

In Wednesday’s announcement, Wet Seal provided a summary of charges connected with the closures. The company also stated that those “estimates do not include any claims or demands which may be made by the landlords of the impacted stores for unpaid rent or otherwise.”

Those potential claims by landlords got the attention of Kevin Starke, senior analyst at CRT Capital Group, which specializes in the credit and distressed securities

market, who said the statment of what was not included is a “warning that a bankruptcy filing is forthcoming.”

According to Starke, landlords are likely to demand

future unpaid rents and, based on regulatory filings with the Securities and Exchange Commission, there’s not much chance the retailer would have the financial wherewithal to satisfy those claims for unpaid rent.

Wet Seal’s annual rental payments in 2014 totaled nearly $80 million, with about two-thirds of that attributed to the stores being closed. Starke said the company would be unable to pay even the cap of $50 million in a bankruptcy for the stores that have closed, not to mention an even higher obligation that could be owed outside of a bankruptcy filing.

Several industry sources, who requested anonymity because of their retail connections, said the likely endgame for Wet Seal is that it files for bankruptcy court protection with a stalking-horse buyer for the operations comprising its 173 stores and its e-commerce business.

James Schaye, ceo of asset disposition firm Eaton Hudson, said, “Many companies are now trying to effect a restructuring while following the guidelines of a Chapter 11 outside of a Chapter 11 filing so they maintain some control over their future. Then when they have no choice but to file, you’ll see a filing for a prepackaged bankruptcy with a stalking-horse in place.”

Another women’s specialty chain that raised the spectre of a bankruptcy filing is Body Central Corp., which on Wednesday said it was exploring strategic alternatives since it is experiencing “significant liquidity challenges.” Body Central targets women in their late teens to mid-30s, with about 270 stores across 28 states.

While this generally is the time of year when retailers file for Chapter 11, after they have assessed whether the holiday season was brilliant or a bust, neither Schaye nor Andrew Graiser, copresident of A&G Realty Partners, a real estate advisory firm, expect a slew of retail bankruptcy filings over the next few weeks.

“People’s perception is that there will be a lot of them, but that’s not the case. There will be a handful of companies that will be filing, but what you’ll see in the special side is more store closures,” Graiser said. He added that the closures will pressure some B mall locations, as well as C and D mall locations. Landlords with closed stores in A malls should easily find new tenants to fill the space, he said.

Last month saw the Chapter 11 filings of Delia’s Inc. and Deb Shops in the U.S. and the bankruptcy equivalent of a Chapter 11 for Mexx in Amsterdam. Delia’s shuttered its doors, while Mexx doors in Canada have either closed or are in the process of closing. Mexx’s attorney in Amsterdam is trying to find a buyer for the company.

A Delaware bankruptcy judge on Wednesday approved the start of going-out-of-business sales at Deb Shops.

“Despite our best efforts and many long hours spent, no going-concern bidder has emerged for Deb Shops,” said Dawn Robertson, the retailer’s ceo. “It is clearly a difficult time for our segment of the retail sector and the turnaround I envisioned when I accepted the job of ceo in July 2013 did not materialize.”