Where Bigger Is Better

True to its maverick spirit, Dallas is looking to the future with economic expansion focusing on fashion and retailing. 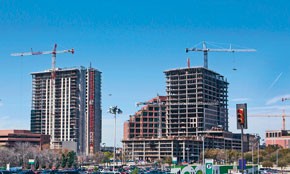 True to its maverick spirit, Dallas is looking to the future with economic expansion focusing on fashion and retailing.

Founded as a trading post in 1841 on the banks of the Trinity River, Dallas’ frontier fever has long included a passion for shopping, which continues to be personified with new stores being built and old favorites spiffing up to compete.

But there’s more than fashion under construction in this sprawling region of 5.9 million people. With towering construction cranes spiraling across the city’s skylines, new office, residential, industrial and transportation projects are seemingly everywhere; orange cones and street blockades divert traffic here and close streets there, for the sake of bigger, better and more — sometimes to mythic portions. In fact, the city’s official symbol is a flying red Pegasus soaring across the downtown skyline atop a historical high-rise once the home of Mobil Oil.

Despite dour national economic forecasts and talk of recession, inflation and foreclosures, Dallas developers are still optimistic, thanks to aggressive preleasing programs and the city’s growing population. Its entrepreneurial spirit and diversified business infrastructure include health care, manufacturing, transportation and energy-related companies, most notably Exxon Mobil, with global headquarters in Big D.

According to figures released March 5 by the U.S. Federal Reserve Bank, the Dallas economy continues to grow at a moderate pace with energy and service sectors remaining strong, while manufacturing, construction and retail continuing at the same strong pace after the previously robust period.

New Dallas-area shopping destinations target a broad range of lifestyles from downtown loft dwellers at the historic Farmer’s Market and nearby Victory Park, to the trendy Oak Lawn and Uptown neighborhoods with clattering green trollies and streetcars and ambitious young professionals. The prosperous midtown area features NorthPark Center, the I-635 loop home to the Galleria Dallas shopping and lifestyle center and sprawling suburbs fanning across the north Texas prairie. Here, the ambitious Glory Park development in Arlington, Tex., will soon be a sports lover’s nirvana, with the Dallas Cowboys’ futuristic football stadium roaring to completion next to the retro-style brick ballpark home of the Texas Rangers baseball team.

Developers are looking to the future with new or expanded shopping destinations across the city, including:

-NorthPark Center, which recently completed a $250 million revitalization and expansion and is now the top tourist destination in Dallas, according to city statistics.

-Park Lane, a $500 million development across the North Central Freeway from NorthPark Center, is under construction. It will include more than 2 million square feet of retail, apartments, condominiums, hotels and office space. Developed by Harvest Partners, the Park Lane complex is expected to be complete by January 2009.

-The Gates of Prosper, a 500-acre mixed-use town center-style complex in the far north Dallas suburb of Prosper, Tex., set to open in 2011 at a cost of at least $500 million. The Gates of Prosper, a project of Dallas Cowboys owner Jerry Jones’ Blue Star Land Co., will include 2.5 million square feet of retail, office and residential space plus a new municipal center for Prosper.

-In the Uptown neighborhood abutting downtown Dallas, Granite Properties and Gables Residential said March 3 they would build a $200 million complex including office, retail and residential space, with completion in mid-2010.

-Village 121, a new 80-acre mixed-use project, includes a large shopping village plus residential, office and hotel space. It is expected to start construction next month, according to developer Lincoln Property Co., with completion in 2009. The company said there will be at least 500,000 square feet of retail space at Village 121, located on a tract of land in the far north Dallas suburb of Plano, Tex. The complex will be situated on land that until recently was little more than rolling bucolic prairie and mom-and-pop vegetable stands.

-The Shops at Mercer Crossing, a new 500,000-square-foot upscale value fashion center in Mercer Crossing, a 1,100-acre master-planned community in the north Dallas suburb of Farmers Branch, Tex., was announced in February by Dallas-based developer Icon Partners LLC. The Mediterranean-inspired village will include more than 100 “value-priced” designer apparel stores in a lakefront lifestyle setting.

-In Fairview, Tex., a once-sleepy town 20 miles north of Dallas, at least two new shopping centers have broken ground at the intersection of I-75 and Stacy Road, including The Villages of Allen and The Shoppes at Fairview, both expected to open by 2010.

Once considered a provincial backwater, Dallas has earned a reputation for its array of collectors of contemporary art, epitomized most by the Nasher Sculpture Center that opened in 2004. The Nasher is part of the 68.4-acre Dallas Arts District, which covers 19 city blocks and includes the Dallas Museum of Art, Morton Meyerson Symphony Center, Dallas Black Dance Theater, Cathedral Shrine of the Virgin of Guadalupe and Booker T. Washington High School for the Performing and Visual Arts, with alumnae like Norah Jones and Erykah Badu.

Dallas construction cranes aren’t limited to shopping center developments, as several new high-profile buildings are under construction in the Arts District and expected to open in 2009. These include:

Another art center, although not in the district, was founded by British pop singer George Michael and his life partner, Kenny Goss. The Goss-Michael Foundation aims to help educate and create a passion for art — particularly British contemporary art — both locally and on a global scale.

Like the Dallas Arts District, the city fosters an amalgam of global cultures, with a particularly large Hispanic population due to Texas’ proximity to Mexico.

In fact, Hispanics are expected to make up 55.6 percent of the Dallas-Fort Worth area population by 2040. Currently, they account for 21.7 percent of the population, according to DFW Latino Trendline and Rincon & Associates, which noted “the dramatic Latino population growth in Dallas-Fort Worth has translated into significant buying power…which more than doubled from $8 billion in 2000 to $18 billion in 2005.” The estimated buying power of Dallas-Fort Worth Hispanics is expected to grow to $27 billion by 2010, according to the Selig Center for Economic Growth, adding “a common misconception is that much of this buying power leaves the U.S. through remittances that immigrants send to families in their home countries. However, nearly 80 percent of their earnings are spent in the U.S.”