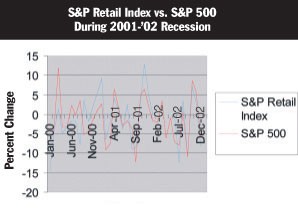 Tracking the performances of the S&P 500 and the S&P Retail indices in the last two recessions indicated when the market upturn began in hindsight, but the lack of evidence that housing has yet hit a bottom in the current downturn suggests the stock market might not be rebounding anytime soon.

While the recent stock market upswing may have some investors hoping for an economic turnaround, several economists and analysts say the United States is in for a long, bumpy landing.

A recession is typically defined as two consecutive quarters of falling real gross domestic product, or GDP. According to HSBC economists Ian Morris and Stephen King, a recession can include sustained periods in which unemployment is rising and GDP is trending below potential growth. Using this analysis, the economists conclude that a recession started in the first quarter of 2007.

“What’s more important is the likely length of any adjustment. Evidence from other countries suggests that even with significant interest rate cuts and looser fiscal policy, a liquidity hangover can be long and drawn out,” the economists wrote in a research note.

They describe the U.S. economy as a “W-shaped story,” not the quick “in and out Vs that investors hope for.”

“Periodic bouts of false recovery will give way to disappointment in 2008 and 2009 before the flicker of a more sustained expansion emerges in 2010,” the economists predicted.

HSBC cut GDP forecasts to 1.5 percent in 2008 and to 1.2 percent in 2009. Unemployment is believed to be heading sharply higher, and the Federal Funds Rate may eventually come down to 1 percent, the economists concluded.

According to Roxanne Meyer, retail analyst at Oppenheimer, The Oppenheimer Retail Softlines Index trailed the S&P 500 by 26 percent on Oct. 12, 1990, five months prior to the declared end of the 1990-1991 recession. The same index traded 35 percent below the S&P 500 on Sept. 21, 2001, two months before the 2000-2001 recessionary period was declared over. The index recovered into 2002, but retreated to near its earlier bottom in October before forming a more lasting recovery.

“This could tell us two things. First, if we head into a recessionary period, it could be a long way down from here, with the ‘first’ bottom likely to be close in timing with the declared end of the recession. Second, it could take even longer before a sustained recovery occurs,” Meyer said.

But Ian Sugarman, director of the Global Consumer Group, Global Investment Banking, at Citigroup Global Markets, believes that the retail industry is stronger today than it was in the early Nineties. He said more retailers are currently focused on both national and international growth. Sugarman added that retailers today tend to be well capitalized and generate free cash, which makes them more resilient to the harsh economy. That’s in contrast to the Nineties when most retailers were vulnerable to financial distress, operated in small to mid-markets, were regionally focused and threatened by the emerging Wal-Mart boom.

And while the first half of 2008 will continue to be rough for retail, the second half should benefit from fiscal stimulus, lower interest rates and easy comparisons, said Adrianne Shapira, retail analyst at Goldman Sachs. Looking at the 2001 rebate plan, one-third of the money was spent right away and another third within six months, which could bode well this time around when the rebate checks start arriving in consumers’ mailboxes in May. The presumed upward turn in sales momentum may also prove supportive for retail stocks, she said.

Shapira expects the consumer environment to soften slightly in 2009, as the rebate-check stimulus wanes. While same-store sales may soften, retailers will anniversary the easiest top-line and gross margin comparisons, which should mitigate some of the pressure.

“But if the downturn proves to be more brutal than expected, stocks could fall an additional 14 percent on average from the current levels,” Shapira cautioned.

“While it is possible that margins and earnings could deteriorate worse over the course of this down cycle, our economists are still calling for a mild recession, and better industry controls should also help mitigate downside risk,” she concluded.

With fewer retailers disclosing monthly sales results, it has become harder to predict what will happen until it unfolds at the end of the quarter. Kevin Regan, senior managing director at FTI Consulting, noted that “retailers are assuming they will make up for the shortfall in the first half during the second half of the year, and are holding on to their full-year guidance.” He’s not sure that there’s much evidence to support their ability to make up that difference.

The retail sector was actually among the last to falter prior to the start of the 1990 recession, and it only began to erode in August 1990. The retail sector during the current cycle peaked around May 2007, about a year fter the housing downturn began.

Margin contraction from peak to trough has also revealed some similarities to that of the 1990 and 2001 recessions, Shapira said. In the early Nineties, margins deteriorated by about 200 basis points, and in 2001 to 2002 they shrank around 300 basis points. Currently margins are down between 250 and 300 basis points.

However, the recovery after 1990 did not occur until a housing upswing was finally under way.

“To date there is virtually no evidence that housing has made a bottom, and those buying retail stocks in anticipation of such a reversal are simply hoping that history repeats itself in the same manner,” Regan said. “There are solid reasons to believe that housing won’t snap back as it did in 1991-1992.”

And with consumers further in debt, it could take even longer for the market to turn around this time.