The online fashion retailer's key indicators — active customers and stock shifted — rocketed ahead, as did its share price.

A Zalando logistics center in Stockholm.

BERLIN — Europe’s largest online fashion retailer, Zalando, reported positive second-quarter results and cautiously raised outlook for profitability, saying it will likely end 2019 in the upper range of the original forecast for adjusted earnings before interest and taxes, between 175 million euros and 225 million euros.

It was the company’s most-prized indicators — customer base and gross merchandise volume, or GMV — that advanced most substantially. That was in line with the e-tailer’s ambitious plans to become a one-stop shop for European clothing consumers and compete with the likes of Amazon.

The numbers spurred markets on. By midday CET Thursday, Zalando shares had risen as much as 15 percent, following several weeks of gains. Analysts at Goldman Sachs, J.P. Morgan and Baader Bank described the results as surprisingly strong.

“We are very happy with our performance as we continue to gain market share,” Zalando’s chief financial officer, David Schröder, said at a press conference in Berlin.

Zalando’s number of active customers grew by 15.2 percent, or 3.7 million, which gives the platform 28.3 million customers across European markets. Site visits rose by 34.3 percent to 986.4 million. Earlier this year, the company announced that it would use the new indicator, GMV, to show how much product it had shifted. As Zalando transitions to being more of a platform, this metric makes better sense, the company explained previously.

In the second quarter, GMV rose, too, growing 23.7 percent to 2 billion euros. “We see our change accelerating, and we will continue to see GMV growing faster than revenues,” Schröder confirmed.

The company’s EBIT was up 2.1 percent to 73.6 million euros, and revenues advanced 17.8 percent to 2.97 billion euros in the first six months of the year.

Zalando started to move toward becoming Europe’s largest fashion e-tailer back in 2015, a Zalando spokeswoman told WWD. “But a lot of the initiatives have only started scaling now,” she explained, referring to projects such as Zalando’s partner program, where brands like Nike and Adidas sign up to sell via the larger platform, as well as the company’s increasingly sophisticated logistics capabilities. “These gained traction, and the changes are only now becoming much more visible.”

Limited logistics capacity had previously been seen as a risk for Zalando’s expansion plans, but halfway through this year that challenge had been sidelined, a note in the half-yearly report said. Schröder said that in Italy, Zalando had established 50,000 more drop-off points for customers and the company was piloting same-day evening deliveries for customers with Zalando Plus — similar to Amazon’s Premium service — in Germany and Switzerland. Zalando was partnering with a variety of different last-mile deliverers, such as bicycle courier companies, and a new logistics center was also being built in the Netherlands this summer to service the Benelux region.

“Our network will eventually be able to handle 14 billion euros-worth of GMV,” Schröder said. 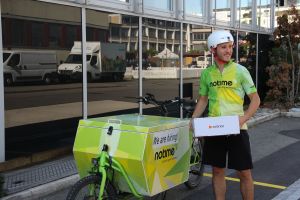 Zalando has been trialing same-day deliveries in Switzerland.  Courtesy

Schröder added that Zalando had also recently signed up London-based beauty e-commerce site Feel Unique, as well as Germany’s Katag textile association, which saw the addition of 50 more off-line stores to the platform.

Zalando now has 1,300 of what it calls “off-line stores,” and this is something the company has been pushing recently. A company spokeswoman explained that, for example, an off-line store might involve products being offered on Zalando by a small shoe shop in a country town. “They might have a web site, but they don’t have a lot of traffic, so when they have time and stock, they sell through us,” she said.

“Off-line stores” differ hugely though. These range from that small shoe store example to the likes of Tommy Hilfiger and the German brand Marco Polo, as well as more recently, the Sigma-owned Karstadt department store chain.

“They all have their own online presence, but Zalando can offer them different kinds of customers, who might not necessarily go to their sites,” the spokeswoman continued.

Zalando also boasted having expanded its offer in premium brands as well as environmentally friendly products. “Our customers increasingly search on the terms organic or fair trade,” Schröder explained.