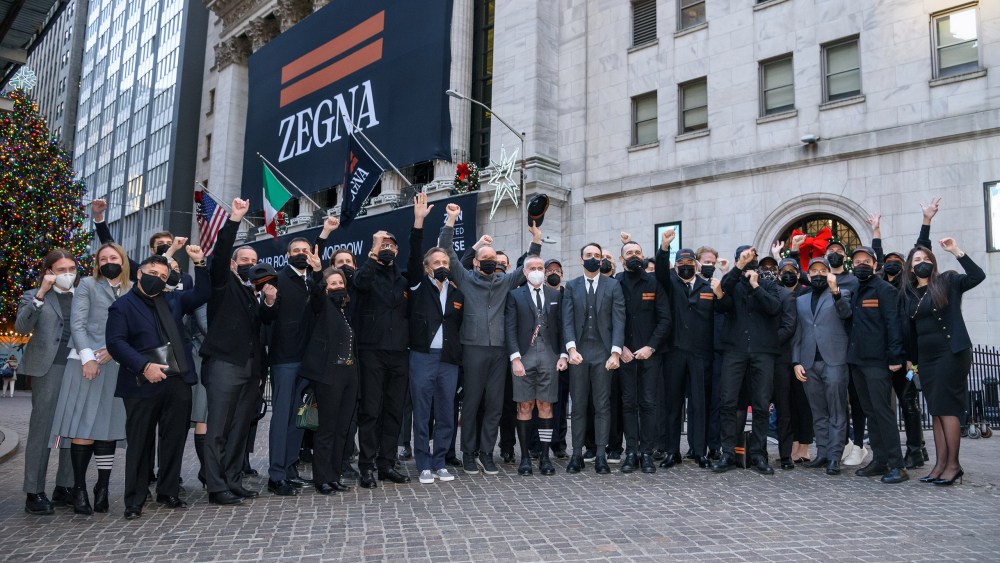 NEW YORK —  All the elements associated with a debut on Wall Street were there, but Zegna’s first day of trading on Monday was also one that spoke volumes about family values — and “la famiglia” was top of mind for all.

“Strong families make strong companies and strong companies make strong families,” said chairman and chief executive officer Gildo Zegna. “This is a four-generation family business, and to be united, strong, tenacious and determined in our actions have been family values for 111 years,” he said, remembering his late father Angelo and his grandfather, founder Ermenegildo Zegna, who mastered “the art of giving back.”

In fact, the executive underscored that, while publicly listed, he was proud the family will continue to control the men’s wear luxury group with a 66 percent stake.

“This company has an incredible history, built by the Zegna family with great passion and energy, through both tangible and intangible values, which are equally important,” said artistic director Alessandro Sartori. “This [IPO] moment was unimaginable some time ago, and is essential in terms of the emotions it provides.”

Zegna expressed that the debut on Wall Street was “a unique experience and really a historic moment,” before ringing the bell at the New York Stock Exchange, to much cheering, clapping and air-punching. Black baseball caps sporting the new Zegna logo (launched after the rebranding earlier this month) were thrown into the air.

Zegna took a majority stake in the Thom Browne company in 2018 and the namesake designer admitted he had never thought his company would one day be public.

“I believe this will reintroduce Zegna to a lot of people, show how important the company is, and the listing is a testament to all the good work that has been done. I am so happy for Gildo and his family,” said the designer, also praising Bazan’s work on his own brand. However, the IPO is by no means a point of arrival for Thom Browne. “There is still so much to do, this is such a good partnership and we know each other’s strengths,” said Browne.

“When Gildo told us about the plan to go public, we thought it was great for the family and the shareholders, it’s a long-term project and a beautiful step for them,” said Bazan, who came to the Wall Street event with his mother. Asked what he thought the listing would mean for Thom Browne, he said “we don’t expect any changes, each day we focus on product, marketing and distribution.”

Bazan praised Zegna’s organization, which helped integrate Thom Browne and made for a seamless journey. “It’s as if the Zegna company had already been a traded company, it has an excellent business model, and we’ve been able to work independently and grow organically.”

“Nothing in the growth is compromising our original idea, we are evolving each day, and now this is not only a designer brand but also a business,” said Browne, touting product quality, consistency and loyal customers. “We are confident in the year and in the future and we are on the path to reach 100 stores.” By the end of the year, the company will have more than 75 stores around the world.

Bonomi also praised Zegna’s organization and structure and said that the listing will show the “potential to Italian luxury fashion companies of investors working with families to share the same goal. Fashion companies must organize themselves better and we, as investors, must be braver, and we will see more of these operations. Italy has a much bigger role to play, and Gildo is showing the way to others. You’ll see more Italians following.”

With the concept of a potential new fashion conglomerate emerging since the news of the listing, Bonomi said it was essential “not to confuse the success of French fashion conglomerates with the Italian way of operating,” reflected by the number of active family companies. He contended consistency was more important. “Zegna is always willing to listen people out but he knows the DNA of the brand must remain intact.”

Bonomi’s SPAC was established in November 2020 in New York because he believed it would help “have visibility in the U.S. and bring to the U.S. market an iconic European business developed by a family matched by few. I found a meritocracy, organization and [environmental, social and governance standards] I did not expect, and this is very important to investors. I am very proud of this [agreement] and I am looking forward to the journey ahead.”

IIAC has raised total gross proceeds of $402.5 million in its IPO. The Zegna family continues to control the luxury company with a stake of nearly 66 percent. Investindustrial has a stake of around 13 percent stake and approximately 21 percent is free floating.

Based on the transaction value, the merged entity will have an initial enterprise value of $3.1 billion with a market capitalization of $2.4 billion. The transaction delivers approximately $761 million in gross proceeds.

“I had always said no to a listing, but I have the privilege of changing my mind, and I thought [Bonomi and the SPAC] was the right way,” said Zegna. “I did not have the courage to propose it to the family before, and first I had to convince myself, but then I jumped on the opportunity with the right team, and the right strategy. I feel good and confident with the decision taken and I hope many will follow us on this route in the future. It’s been a marathon but we like marathons. This is the right time and we got the trophy.”

In fact, the first day of trading took place as New York grapples with a surge in COVID-19 cases, and the stock markets get hit by the uncertainties connected to the pandemic, but Zegna said he never considered postponing the listing.

He also said he would not be checking the shares’ performance daily. “I am focused on the business, and the added anxiety would distract me from my job. In any case, we can’t change our strategy every day, we must think medium term independently from the situation. This won’t change my life, our strategy is right and will not change with the IPO. Twenty-twenty was a tough year but we ended it stronger and more positive.”

He admitted the company has a lot on its plate, focusing on the casualization of the brand and building the accessories categories. “We must concentrate our resources on that — if we don’t, someone else will, the market is there to grab. There must be no distraction, I’ve said it before — we are not going to do women’s wear and we must remain focused. Raw materials are scarcer and more expensive. We need scale and we need to control the supply chain.” The group has invested in its own manufacturing pipeline for years and Zegna said that, whatever new acquisition could come his way, “it should be in line with our values and DNA.”

Zegna himself embodied the company’s new course into more comfortable looks and admitted in the past he would have worn a tie or a double-breasted suit on such an occasion. Instead, he was wearing a soft cashmere overshirt — a cornerstone of Zegna’s Luxury Leisurewear collection — and comfortable-looking pants in a gray palette.

“Smart-working changed our habits, and our challenge is to [offer] that new wardrobe. The suit is not dead but differentiated for new occasions.”