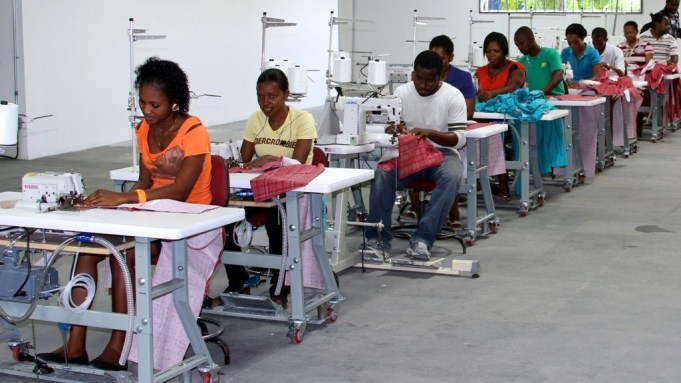 A new factory is about to begin production in the Haitian capital of Port-au-Prince that aims to be a model of corporate social responsibility, while answering the call for aiding the beleaguered Caribbean nation with quality jobs and a commitment to invest in the community.

Industrial Revolution II wants to be a different kind of garment factory, one that values social advancement for its workers just as much as providing fashionable products to customers. The factory is the brainchild of several entrepreneurs, designers, executives and celebrities, and is run by Rob Broggi, a former finance industry executive who is a founding partner and the firm’s chief executive officer.

Broggi said many people involved in Haiti relief efforts and businesses were frustrated by the lack of efficacy of the aid programs and charity models operating in the country in the wake of the devastating earthquake that hit there in January 2010 and caused 230,000 deaths, 300,000 injuries and displaced about 2 million people.

“So a group of us got together and thought we could potentially create more sustainable change through job creation and economic development, particularly higher-value job creation,” Broggi said. “The people in Haiti don’t want handouts and charity. They want jobs and to be able to take care of their families.”

IRII operates under a shared-value business model, investing 50 percent of company profits into workers, their families and the community through health and wellness programs, training and education initiatives and public infrastructure.

“These are programs that will be implemented in partnerships with groups that have been operating in Haiti for a long time,” Broggi said. “We set a high bar for the working environment. At the same time, we’re also investing in our business. If we have healthier, more productive, better-trained, happier workers who are not stressed out about their housing situation and whether their kids are going to be able to go to school, we’re going to have a much better, more productive factory and workforce. It’s a win-win for everybody.”

Employees are being educated about the entire manufacturing process and cross-trained to perform multiple functions of garment construction. A modular manufacturing system results in better quality, fewer injuries and worker empowerment, the company notes on its Web site.

IRII has the support of such heavy hitters as actor-producer Matt Damon, who is a founding partner, and advisory board member Donna Karan, who oversees and is involved in many Haitian business and cultural projects, and Fern Mallis, former senior vice president of IMG Fashion and former executive director of the Council of Fashion Designers of America. Broggi said having such people on board adds to the credibility and awareness of the company. He said the recent Bangladesh tragedies have created a wave of response and a louder call for change, which he hopes leads to more companies taking IRII’s approach and more people caring where and how their clothes are made.

Broggi said IRII is going into production in a few weeks, with the first two training teams in place now, and “we very quickly expect to ramp up to a couple of hundred employees.”

He said at full operation, the factory should have the capacity to produce 5 million units annually of knit goods, employing 280 to 300 people. Orders are in place for spring goods and a stock replenishment program for a customer transitioning its production from Pakistan to IRII. The company has invested in advanced training programs and technology, and is set up to handle smaller orders and quick-turn requests. It has purchased the latest sewing technology from Pegasus and Juki and has invested in state-of-the-market digital garment printing technologies from Kornit Digital and Avalanche that allow unlimited color and design capabilities for fashion printing and custom runs. These systems use only water-based, environmentally friendly ink compliant with Oeko-Tex and GOTSV3 standards.

The company adheres to Better Work Haiti and Worldwide Responsible Accredited Production standards. As part of its funding engagement with the Inter-American Development Bank, IRII created an extensive environmental and social management plan.

The first two brands on the production line will be Boxercraft, an Atlanta-based supplier of better spirit wear and sportswear, and Threads 4 Thought, a sustainable apparel brand headquartered in New York.

Broggi feels the progress in Haiti is proceeding well. He said Haitian President Michel Martelly and Prime Minister Laurent Lamothe are focused on making it easier to do business in Haiti, and former President Bill Clinton has spent a lot of time working with the administration to put the right systems in place to operate there efficiently.

A U.S. Government Accountability Office report issued in June said as of March 31, the U.S. Agency for International Development had obligated $293 million, or 45 percent, and disbursed $204 million, or 31 percent, of $651 million in funding for Haiti from the Supplemental Appropriations Act of 2010. USAID has allocated $170.3 million to construct a power plant and port in northern Haiti to support the newly developed Caracol Industrial Park, which includes Sae-A Trading Co.’s apparel factory that opened last October. But GAO said the Caracol park has had some problems. The agency’s report noted that the sustainability of the CIP, power plant and port are interdependent, and each must be completed and viable for the others to succeed. USAID completed the power plant’s first phase with less funding than allocated and in time to supply power to the first CIP tenant. Port construction will not begin until at least two years later than originally planned due in part to a lack of USAID expertise in port planning in Haiti.

These problems were one reason IRII decided to build in the capital rather than an initial plan to construct a greenfield factory in Croix-des-Bouquets, southeast of Port-au-Prince, which the firm still hopes to do down the road.

“We decided to go with a less risky proposition, to take an existing, defunct factory in Port-au-Prince and completely renovate it,” he said. “It’s right by the airport and seaport, and near other factories with an infrastructure in place. We want to get out of the gate, prove this model, create a track record and build a customer base. So far the response from the brands has been great.”

Broggi is confident of IRII’s success, adding, “Who would not want to sell a quality product that has a hang tag on it, at no extra cost, that says this was manufactured in a socially responsible way where half the profit gets reinvested in the community?” He noted that manufacturing in Haiti also makes business sense for U.S. brands that want to take advantage of the country’s duty-free trade status, nearby production with fast shipping and lead times, and low cost structure.

The bottom line for Broggi: “It is our mission at IRII to prove that creating social progress and a thriving business need not be mutually exclusive endeavors.”