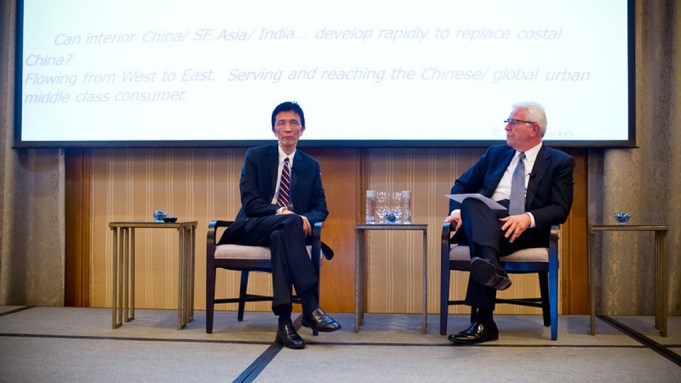 WASHINGTON — Where to go after China?

The question of where to find low-cost production as China becomes more expensive was one of the central issues addressed at the three-day American Apparel & Footwear Federation’s annual executive summit here. Rising cost pressures remain a major concern for the fashion industry as it battles volatile cotton prices, spiraling gasoline prices and an impending battle with the Obama administration over elements of the proposed Trans-Pacific Partnership trade deal.

As companies continue to look for new sourcing in countries such as Vietnam as an alternative to China, which has seen labor costs rise significantly, some of the emerging nations are Indonesia and Bangladesh.

Edwin Keh, former chief operating officer and senior vice president of Wal-Mart Global Procurement and now a lecturer at the Wharton School at the University of Pennsylvania, said interior China is still the best “five-year solution” to sourcing in the short term, and he warned that Vietnam is already overused.

“We believe Vietnam is saturated — that if you’re not there already today, you missed the boat,” Keh said. “There are just not enough bodies in Vietnam to satisfy any significant new volume out there.”

Rick Darling, president of LF USA and chairman of AAFA, pointed to Bangladesh and Indonesia as two of the growing alternatives to China, and he also gave a nod to the Western Hemisphere.

“There is much interest in the Western Hemisphere,” said Darling. “I can’t say necessarily that we see big movement yet. But I think we see big interest. Usually big movements are preceded by big interest. I think people reevaluate supply chains from a security standpoint, and now a new cost approach, in terms of cost overseas. I think there is renewed interest there that maybe will lead to increased production in the region.”

Keh said his research shows that Central America will be a “big benefactor in the move to diversify out of coastal China.”

In the long term, Keh said sub-Saharan Africa could be the next sourcing frontier for apparel brands, some of which already produce there under a U.S. preferential program called the African Growth & Opportunity Act.

“Within the next five to 10 years, it is important for all of you to stay in touch with areas of the world like this,” he said, noting that infrastructure challenges in Africa are hampering investment there now but the Chinese are making substantial investments in Africa to build infrastructure.

The Obama administration’s trade policies were heatedly discussed during the executive summit and the focal point was the Trans-Pacific Partnership negotiations between the U.S. and eight other countries — Vietnam, Singapore, Australia, New Zealand, Peru, Brunei, Malaysia and Chile — with Mexico, Japan and Canada also looking to join the negotiations.

If ever forged, it will be the largest regional trade agreement completed by the U.S., and there is a lot at stake for the fashion industry. Apparel executives grilled a U.S. trade official at the summit and asked him to explain why the U.S. proposed a strict “yarn-forward rule of origin,” in addition to how the government can ensure that importers will benefit from the sourcing opportunities the U.S. is touting. The rule requires that apparel be made of fabric and yarns supplied by the U.S. or other TPP signatory countries to qualify for duty free benefits when shipped back to the U.S.

“We’re hoping for a flexible rule of origin,” one that would allow apparel brands to use third-country fabrics and yarns, said Kevin Burke, president and chief executive officer of the AAFA, in an interview. “That is the only way we will remain competitive.”

Demetrios Marantis, deputy U.S. Trade Representative, told the group that while the U.S. is not budging from its position on a yarn-forward rule, there are efforts to create a short supply mechanism that would allow companies to use fabrics and yarns on the list from third countries if they cannot be made in commercially meaningful quantities in the region.

“We very much recognize that the yarn-forward rule of origin is going to present difficulties while the region transitions into an integrated region for purposes of sourcing inputs, which is why we are currently in the process of working with many of you to determine how we can best use both on a temporary basis and on a permanent basis short supply provisions, so that inputs that you need both in a transitional period or inputs that you need that you will never be able to source from the region are taken into account,” Marantis told executives.

Marantis later said: “The challenge that we have…is how do we find that sweet spot where we really do get benefits of an immediate tariff reduction from a region that includes a country like Vietnam with so much potential for sourcing for the U.S. and at the same time try to encourage real regional investment through a yarn-forward rule of origin. The last thing we want to do is develop a mechanism and develop an agreement where third countries that aren’t party to the agreement get a back-door benefit.”

Volatile commodity prices were also listed as top concerns by executives at the summit.

“One of the issues still is the uncertainty about commodity prices of cotton,” said Ed Emma, president and chief operating officer at Jockey International Inc., in an interview. “It appears to have stabilized over the last several months, so we are optimistic. But I think there is still a sense of where this thing is going to go. I think that is a concern for our industry in general.”

He said the spike in cotton prices last year “threw everyone for a loop, and I think everyone is just a little skittish.”

“Cotton prices have come down,” said Rick Helfenbein, president of Luen Thai USA. “But it became a little problematic in China because when the cotton market was collapsing [last year] China made a valiant effort to stabilize it so they set a ceiling price. What happened was the world price fell below China’s price, so now price of fabric in China is actually higher than some other places in world, which is causing more stress on the system — and no one has figured out quite how to deal with that just yet.”

India lifted a ban on existing cotton exports last week but is still not allowing new export orders to be shipped, which remains a cause of concern, said Nate Herman, vice president of international trade at the AAFA.

“When you take the second-largest cotton exporter out of the equation it will have an impact, and the price decline we were seeing has already stalled because of this,” Herman said. “That combined with the fact that China seems to be in a buying mode because it wants to build up its cotton reserves could create a cotton shortage in the industry.”

Marantis told the group the U.S. government is aware of the industry’s concern.

“We have been very disappointed with India’s recent enactment of yet another ban on cotton export,” Marantis told the group. “It’s a huge problem. It is very disappointing that India has decided to take this kind of measure. We are working hard internally with our colleagues and other agencies to communicate our strong and serious concerns to the Indian government.”

Darling of LF USA said the ban should not affect the overall cotton market.

“Prices look pretty stable and we don’t expect it to change too much,” he said. “Obviously we are not in favor of the ban but…it doesn’t seem to be having any real impact.”

Gas prices are another story.

“Gasoline prices impact everybody,” said Burke of the AAFA. “You have to think about not only here but abroad. You’ve still got to get the product from the factory to the container to the boat to the distribution center to the retailer — and that all requires some level of transportation, so the higher the fuel costs, obviously, the higher the impact on the price of product. Escalating costs are something you deal with. Eventually it has to be factored into the cost.”

The price per gallon of crude oil was near $106 per barrel during the AAFA summit and was slightly higher on Monday.

“I suspect the threshold is around $120 a barrel,” Helfenbein said. “If it gets up that high we’ll be wiping more sweat off our brows. It is an imaginary threshold, but it is probably real.”