Politicians slammed the brand for refusing to pay their rent and say they’re watching to see if rules need to be adjusted, thanks to corporate rent-dodgers.

An Adidas outlet in Metzingen.

Despite wide-ranging criticism of German sportswear brand Adidas, and various other large companies who have decided not to pay their rent while their stores are closed in Germany, the new legislation that makes this possible won’t be changed immediately.

“We do not envisage any modifications to the new rule, which comes into effect April 1,” a spokesperson from Germany’s federal ministry of justice told WWD. “Although, as with any other matter, the ministry is constantly observing the practical application of the law to see if there is any need for action.”

Last week, when the German government passed legislation to help the country deal with the economic impact of the coronavirus pandemic, apartment renters, who couldn’t work, and medium-sized business owners, who had been forced to close, breathed a sigh of relief. One of the rules in the rescue package said that anybody who could not pay their rent between April 1 and June 30 this year could not be evicted. In Germany, landlords can commonly begin eviction proceedings if the rent is not paid for two months in a row.

This week larger, multinational companies also started taking advantage of the eviction freeze, with a number announcing they, too, would not be paying their rent. Nonessential retailers of all kinds have been closed in Germany since mid-March. Those announcing they wouldn’t be paying rent this month included local apparel industry stalwarts like Adidas, H&M in Germany, Puma and Europe’s largest shoe retailing chain, Deichmann. Adidas’ decision will impact 26 stores in Germany, H&M’s 460 and Deichmann’s 1,500 outlets.

German politicians were quick to criticize the decisions, with Adidas coming in for particular censure.

The federal minister of justice, Christine Lambrecht, described Adidas’ move as “indecent and unacceptable” and indicated that the new rule was not meant for large, financially stable companies to take advantage of. Her comments are particularly pertinent given that her ministry is the one charged with overseeing this legislation.

It was pointed out that the company’s net income was 1.91 billion euros in 2019 and that, until very recently, it had been planning a dividend payout worth 800 million euros and a share buyback of up to a billion euros.

The country’s minister of employment, Hubertus Heil, told local media that the company’s behavior was “irresponsible and incomprehensible” and Germany’s finance minister, Olaf Scholz, said “it’s irritating when such large companies simply say they are going to stop paying rent.” 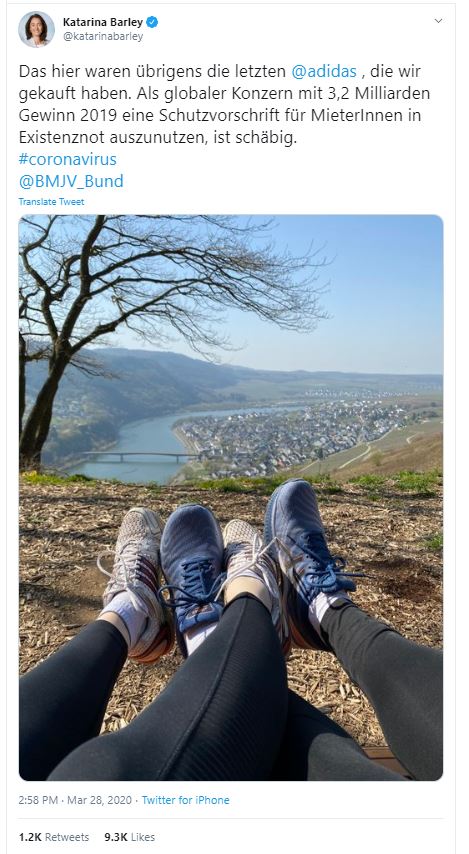 Some senior politicians went even further, suggesting a boycott of the brand. Former German justice minister and now a member of the European Parliament, Katarina Barley, posted a picture of her Adidas shoes on Twitter, suggesting that these were the last she would be buying. “A global company with turnover of 3.2 billion exploiting protective regulations meant for tenants, whose livelihoods are threatened, is shabby,” Barley wrote under the picture. Later, she added: “if the damage done to their image is worse than making some short-term economies, maybe a few managers will think twice.”

Adidas was quick to respond to the criticisms. The sportswear firm pointed out that the landlords affected by their decision were large real estate companies, investment funds or insurers and that these had been very understanding so far. Only four of Adidas’ rental contracts were between the company and private individuals, and these rents would be paid as usual.

Additionally, as Adidas ceo Kasper Rorsted pointed out in an interview, the new rules didn’t mean that the missing rent would never be paid. The rules say that, no matter whether they are a multinational brand or a private householder, tenants must come to an agreement with their landlords and work out how to settle unpaid rent by mid-2022. If rent is still owed 24 months later, then eviction proceedings may begin.

“We think the whole problem came about because of a failure in communication by the government,” Alexander Wiech, a spokesman for the German landowners’ association Haus & Grund, told WWD. “When the idea was first suggested by the justice ministry, it seemed to be a signal from the political establishment that nobody had to pay rent any longer,” he remarked.

Haus & Grund believes the best solution would be the government supporting tenants financially — everyone from ailing businesses to individual residents in apartments — so that “the problem is not simply pushed from the tenants onto the landlords,” Wiech argued.

Another industry organization, the German Property Federation, or ZIA, said although legal changes to the new rules might be difficult in the short term, they would like to see the German government improve them, now that shortcomings have been made apparent.

“If rents are not paid, lessors should be able to suspend interest and capital repayments,” ZIA head Andreas Mattner suggested in a statement. That would be more just, Mattner argued, before calling upon everyone involved not to exploit the situation and warning of potential insolvencies among landlords, if this continued. “Hardening the front between landlords and tenants won’t help anybody,” he concluded.

Other German apparel industry retailers, including Gerry Weber, Marc O’Polo and C&A, are also considering not paying their rents, but say they’re still negotiating with landlords and suppliers.