As workers at RSI Apparels gathered for their payments after their factory was shut down, there was a scramble to check and countercheck identities last week. 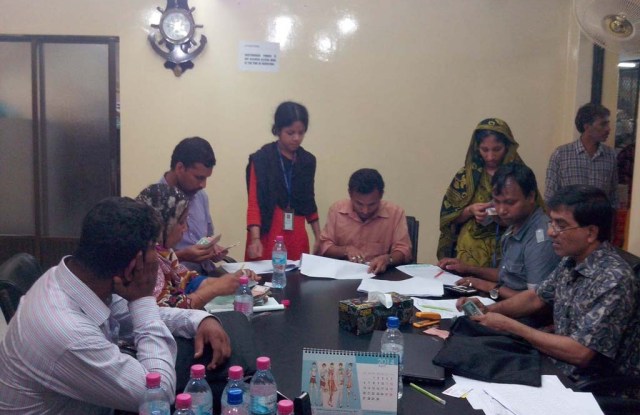 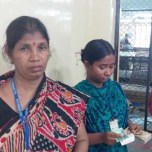 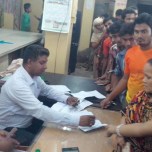 CHITTAGONG, Bangladesh — As workers at RSI Apparels Ltd. gathered for payments from their factory, there was a scramble to check and countercheck identities last week, in a solemn moment before the factory shuttered.

The Alliance for Bangladesh Worker Safety has agreed to pay workers of factories that are shut down for safety reasons 50 percent of their wages for a period of two months. The other half is paid by the factory owner.

The workers were both tearful and grateful. The factory, started at the location in 2001, had some old hands and many of them touched the feet of the product manager in respect and gratitude and a farewell.

The alliance is a group of 26 retailers and brands including Wal-Mart Stores Inc. and Gap Inc. that has been conducting inspections for structural, electrical and fire safety in supplier factories. About 450 inspections out of 630 have been completed so far.

Separately, the Accord on Fire and Building Safety in Bangladesh represents more than 150 European retailers and brands and is inspecting more than 1,545 factories, of which about 350 have been completed.

RSI is one of two factories that has been shut down recently after inspections by the alliance teams. The other, Jan Fabrics, is also in Chittagong.

“There are structural integrity issues in both,” M. Rabin, managing director of the alliance, told WWD.

MAM Garments Ltd, which is in Mirpur, Dhaka, was due for a review panel Monday.

A fourth factory, Bay Fashions Ltd., also in Chittagong, has been referred to the review panel as well.

Rabin explained that, according to the law, if the owner has another facility within a distance of 8 kilometers, workers are under obligation to go that distance. If they do not wish to, then the owners are not obliged to compensate the workers.

Jan Fabrics reportedly has another factory into which the workers have been absorbed at the present time.

RSI Apparels, which was reviewed on April 17 and 18, was shut down two days later, Rabin said.

Payments were made to the workers last Wednesday in a process overseen by factory officials, nine members of BRAC, an international development agency that is helping to disburse the payments and a member of the alliance itself, along with several security personnel from the government.

Ahm Mojammal, senior program manager of BRAC, told WWD that 340 people were paid. The decision to close the factory appears irrevocable and hard to fix because of the level of structural damage. The workers leaving know they will find other jobs, but not at this factory.

“We were very cautious and were very aware as we made these payments, to make sure it was the right person,” said Ahm Mojammal. “We checked identity cards, photographs of the person, the records within the company, and when we faced a problem, asked other workers to help us make that recognition.

Payments were made in cash and signatures taken on revenue stamp paper.

Those that didn’t get payments from the alliance, such as the administrative staff and drivers, raised a murmur of protest.

But there was no trouble.

Following recommendations by the team of inspectors, by the alliance or the accord, a review committee makes a final decision. This is a powerful committee comprising representatives of the government; the accord; alliance; Bangladesh University of Engineering and Technology, or BUET; the Bangladesh Garment Manufacturers and Exporters Association, or BGMEA, and the Bangladesh Knitwear Manufacturers & Exporters Association, or BKMEA.

Anjan Shekhar Das, who is managing director of RSI, is also a director at BGMEA and understands the complexity of the situation in which he finds himself.

“It is a very dangerous situation for the owners,” he said. “We are grateful for the help and appreciate that the alliance is putting in this money and working to develop the garment industry. But on the other hand, as in this factory, it is in a rented building and there is nothing we all can do to make it work. Meanwhile, we have some goods in transit, we are working with banks, with orders, with our clients and are struggling not to lose any of that trust. The cost of all these things is very high.”

He explained that part of the reason Rana Plaza was such a severe case was not simply structural damage. “Rana Plaza was a different sort of accident. On many of the floors of the building, there were 500 KVA generators and the vibrations from each caused severe structural damage. After Rana Plaza, BGMEA inspected factories to ensure that no such situation would be replicated. At this time, the inspection teams that are checking should take more immediate measures, such as reducing the load of the production line, reducing the number of workers at a location, and give factory owners an exit plan.”

Two other factories in the same building as RSI Apparels — Kent Garments Pvt. Ltd. and ShahChand Garments Ltd. — are reportedly part of the National Tripartite Action Plan, under which the 1,200 factories that are not being covered by the alliance and accord are being inspected by engineers from BUET with the International Labor Organization as a neutral observer.

The question at this point becomes the difference in treatment for workers in the same building, a BGMEA official observed. Although the alliance is making the payment to their workers, the others will get nothing when their factories close down as the entire building poses structural risks for occupants.

This is going to initiate labor unrest, something that the garment industry can hardly afford at this time, he said.

“We appreciate that the Alliance is helping with payments to workers,” Anjan Shekhar Das of RSI observed, “it makes a huge difference. But we want the others, like the accord, to come forward with similar help.”

RSI Apparels was also on a list of factories that Wal-Mart audited last year and barred from production after the retailer undertook in-depth inspections in Bangladesh relating to electrical, fire and building safety. “These facility audits are conducted by accredited and internationally recognized auditing firms and are based on our Ethical Sourcing scope. A factory that has been assessed as ‘red-failed/unauthorized’ is one in which our independent audits have found serious violations of our ethical sourcing standards. Red-failed/unauthorized factories are not permitted to produce merchandise for Wal-Mart,” the company had noted at the time.

Alliance payments are made from a $5 million worker-safety fund, which is being used for the disbursements that come up as inspections proceed. They will continue to be made in association with BRAC.

Meanwhile, the alliance is also making another round of critical checks. Last week, a committee of electrical, structural and safety experts flew in from the U.S. and along with a local team in Dhaka, will check back on factories that have already undergone inspection, Rabin said.